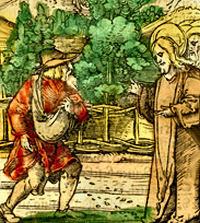 O God, strength of those who hope in you, graciously hear our pleas, and, since without you mortal frailty can do nothing, grant us always the help of your grace, that in following your commands we may please you by our resolve and our deeds. Through our Lord Jesus Christ, your Son, who lives and reigns with you in the unity of the Holy Spirit, one God, for ever and ever.

Statio Orbis is the Liturgy on the final day of the 50th International Eucharistic Congress that will take place on Sunday 17th June 2012 in Croke Park, a soccer stadium in Dublin, Ireland.

The Mass will be celebrated by the Papal Legate, Cardinal Marc Ouellet.

It is a time of pause (statio) and come to terms with what it means to celebrate, receive and live the Eucharist.

In February 2008, the Holy Father had a Q & A with his priests in Rome and one of them expressed his lack of comfort with a Mass celebrated outdoors during a large gathering of Youth at Loreto.  In his reply, Pope Benedict attributed the development of the concept of statio orbis to the great Jesuit liturgical scholar Jozef Jungmann: 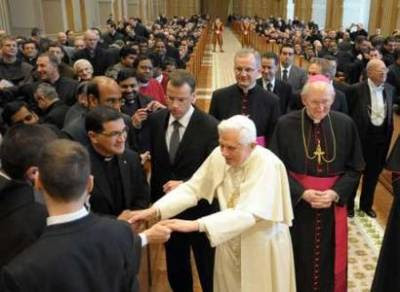 A great problem, however, is that of the liturgies in which masses of people participate. I remember in 1960, during the great International Eucharistic Congress of Munich, there was an endeavour to give a new physiognomy to the eucharistic congresses, which up to that point had solely been acts of adoration. The intent was to put the celebration of the Eucharist at the centre as the act of presence of the mystery being celebrated. But immediately the question arose how that would be possible.

To adore, it was said, is possible also at a distance; but to celebrate, a limited community is necessary which can interact with the mystery, therefore a community which must be the assembly around the celebration of the mystery. Many were opposed to the public celebration of the Eucharist with hundreds of thousands of people. They said it was not possible precisely because of the very structure of the Eucharist, which requires the community for the communion.

There were also great personalities, very much respected, who objected to this solution. Then professor Jungmann, a great liturgist, one of the great architects of the liturgical reform, created the concept of statio orbis, namely reverting to the statio Romae where even in the time of Lent the faithful assembled at a point, the statio: there they are in statio as soldiers for Christ, and then they go together to the Eucharist. If that, he said, was the statio of the city of Rome, where the city of Rome came together, then this is the statio orbis [statio of the world].

And from that moment on we have the eucharistic celebrations with the participation of masses. To me, I must say, this remains a problem, because the concrete communion in the celebration is fundamental, and therefore I do not find that the definitive answer has been found. Also in the last Synod [of Bishops on the Eucharist, in 2005] I have made this question emerge, which has not, however, found an answer. I have also made another question be raised, regarding concelebrations en masse: because if there are concelebrating, e.g., a thousand priests, one does not know if this is still the structure willed by the Lord. In any case, these are questions.

And so, you encountered a problem with participating in an en masse celebration in which it is not possible for everyone to be equally involved. Therefore, one must choose a certain style to preserve that dignity that is always necessary for the Eucharist, and hence the community is not uniform and the experience of participation in the event is diverse; for some it is certainly insufficient. But this did not depend on me; rather on those who have taken care of the preparations.

Hence it must be reflected well on what to do in such situations, how to respond to the challenges of such situations. In Loreto, if I am not mistaken, it was an orchestra of handicapped people who performed the music, and perhaps the idea was just to demonstrate that handicapped persons can contribute to the sacred celebration, in which not only are they not excluded but become primary agents. And this way, loving them, everyone does not feel excluded, but even involved. This seems to me a very respectable consideration which I share. Of course, the fundamental problem [of en masse celebrations] remains.

But it seems to me that also in this regard, knowing what the Eucharist is, even if one does not have the opportunity of an external activity as one might wish in order to feel one is fully participating, we should be in it with the heart, as the ancient imperative of the Church says, created perhaps precisely for those who were at the back of the basilica: "Lift up your hearts! Now, let us all go out of ourselves, so that we all are with the Lord and are together."

As I said, I don't deny the problem, but if we really follow this word "Lift up our hearts", we will all find, even in difficult and sometimes questionable situations, true and active participation.

When we celebrated the Statio Orbis Mass in Quebec City in 2008, a torrential rain just at Communion time caused great havoc.  Some of that was present yesterday when a downpour (not torrential but substantial) occurred just before Communion, but stopped as people were communicating, and this was the case on several other occasions this week, requiring concelebrating bishops and priests to make use of plastic ponchos (in Quebec, all the Masses except the closing one were indoors in an arena, which meant all the liturgies were quite fine, even if we too suffered from rain almost every day of the ICE).


The forecast for today is rain again, but I'm hoping the skies will remain shut during the Mass.

MORE PHOTOS FROM DUBLIN;
CLOSING STAGES OF THE IEC 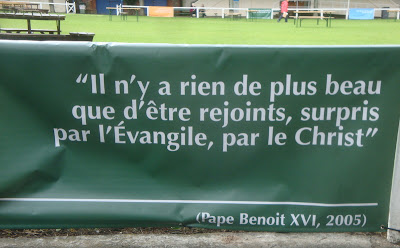 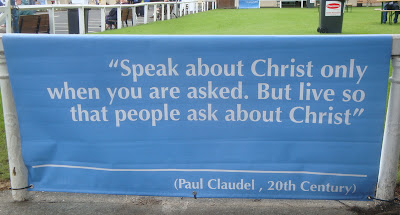 Posted by Archbishop Terry at 5:40 AM