During my first visit to the Holy Land, my time in the —the homeland of Jesus—had been very restricted.  On the eve of my departure, I felt disappointed that Caesarea Philippi was not on my itinerary.  So I leased a car and drove to the northern reaches of Galilee and spent several quiet hours in prayer at the town of , a name retaining traces of an original Panias, sanctuary of the Greek god Pan.
The motive for my idiosyncratic pilgrimage to Caesarea Philippi derived from my studies of Mark's gospel in which Caesarea Philippi—as the place where Peter confessed Jesus as Christ—plays a pivotal role.
In Mark's narrative Peter's confession lies at the centre.  It both sums up the first half of the gospel concerned with Jesus' identity (1.1-8.30), then anticipates the second half (8.31-16.8), which explains how Jesus realizes his messianic destiny by suffering, dying and “after three days rising”.
In my devotion, I had wanted to draw as near as possible to the place where Simon Peter—on behalf of the Twelve and all future disciples—opened himself to the Father's revelation concerning Jesus.  A similar motivation of wanting to be close to the one who first made the Christian confession undergirded construction of St. Peter's Basilica on the hill and as a place of pilgrimage.
Guided by God's Spirit (“flesh and blood has not revealed this to you, but my Father in heaven”), Peter declared that Jesus was more than Elijah returned to earth; greater than John the Baptist come back to life; and more significant than one of the ancient prophets reappearing in Israel's midst.
In Hebrew terminology, Peter declared that Jesus was “the Messiah” or “the Christ” (its Greek equivalent).  Translating both Hebrew and Greek terms, we understand Peter to have been asserting that Jesus was God's “anointed one” (Mark 8.29).
In Matthew's account, the place in God's plan of the “Son of Man”—with whom Jesus identified himself (“who do people say the Son of Man is?”)—goes even beyond being another Jeremiah, the prophet whose personal experience of rejection and suffering foreshadowed the rejection and suffering of Jesus.  Interestingly, only Matthew's gospel makes mention of “Jeremiah” in the disciples' reply to Jesus' question (cf. Matthew 2.17-18; 27.9-10 for other mentions of Jeremiah).
The appropriate identification of Jesus lies in the Church's confession that he is “Son of the living God”.  Describing Jesus' identity in terms of his relationship to the heavenly Father, probably formulated in the light of the experience of Jesus' resurrection, effectively undermines any notion that Jesus' messiahship contained military or nationalistic implications.
In Mark's account, the confession of Peter and his fellow disciples was met with a command from Jesus to keep silence.  The disciples were not to tell others about Jesus (Mark 8.30).  In Matthew's version, by contrast, Jesus' response was not silence, but a blessing and declaration.
Jesus announced Peter was favoured by God (“blessed are you, Simon, son of Jonah”).  Jesus then went on to change the name of his insightful disciple.  Through a pun on his name (in Aramaic both the name “Peter” and the word for “rock” would be kêpha— Cephas—the name by which Paul refers to Simon Peter in Galatians and 1 Corinthians), Jesus laid out the new role of Peter in the community of faith: “You are Peter and on this rock I will build my church, and the gates of Hades will not prevail against it”.
Roman Catholics understand Jesus' statement and the promise giving Peter power “to bind and loose” to mean that he intended to build the Church on Simon Peter, a human individual prone to weakness but willing to allow God's power to be at work in his frailty.  Even death (“Hades”) would not prevail against the church.
Some years ago, the International Anglican-Roman Catholic Dialogue invited Christians to regard the Petrine ministry of the pope—Bishop of Rome and successor of Peter—as part of God's “gift of authority” for the church and spoke of the need by the church to receive this gift.
We pray in gratitude for the gift of the papacy, which continues Christ's commission to Peter, and ask God's help to renew it, that it may serve all God's people.
* * * * * *
The Holy Father Arrives in Madrid Today 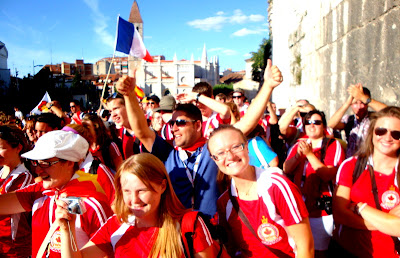 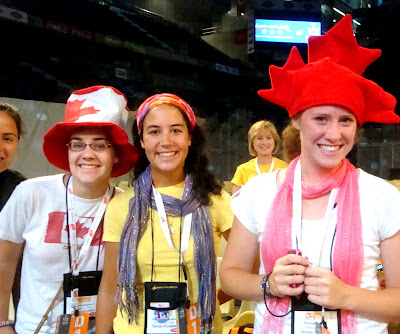 Saintly Patrons of the WYD 2011 − Saint Isidore the Farmer and Saint Mary de la Cabeza, Saint Ignatius of Loyola, Saint John of Avila, Saint Francisco Xavier, of the Cross, Saint Rose of , Saint Raphael Arnáiz − pray for us!
Blessed John Paul II pray for us, pray for all young people of the WYD 2011 so that they open their hearts wide to the saving grace of Christ, the only Redeemer of human kind, these extraordinary days of the Holy Spirit during which we want to “count the wonders of the Lord to the nations”!
Amen.
Posted by Archbishop Terry at 3:26 AM