A Retreat in Avila - St. Rose of Lima

This posting intended to treat more fully of the retreat days we Ottawa pilgrims are sharing in the lovely walled town of Avila, but the internet connections have been undependable.  There will be a longer treatment of our stay here and doings before the departure for Madrid, Charles de Gaulle Paris airport, Montreal and the bus ride home tomorrow if the internet fix remains stable. 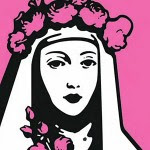 Her baptismal name was Isabel Flores de Oliva; she was born April 20, 1586 in
She had relationships with two other saints: confirmed by the Archbishop of Lima, saint Turibius of Mogrovejo; she was also a friend of St. Martin de Porres.
She was known for: her love of the Eucharist and prayer; she is the first canonized saint of the Americas.
Patron Saint of: people ridiculed for their piety; against vanity.
Imitate the Saint: do not seek the path of worldly greatness, try to live each day as faithfully to your vocation as possible, accept the sufferings cheerfully, as gifts from God.
Did you know? St. Rose of was not a nun, rather she was a lay tertiary, spending most of her life at her family home and she worked hard to help support the family. She was such a beautiful baby that she was called Rose, and that name remained. As she grew older, she became more and more beautiful, but she was so devoted to her vow of chastity that she used pepper and lye to ruin her complexion so she would not be attractive. St. Rose was a mystic and visionary, who received many mental and physical sufferings, including an invisible stigmata.

Posted by Archbishop Terry at 12:59 AM