St. Clare of Assisi - Off to World Youth Day 2011 in Madrid via Paris

TODAY, the Church celebrates a memorial at Mass of St. Clare of Assisi.

Clare’s father was a count, her mother the countess Blessed Orsolana. Her father died when the girl was very young. After hearing Saint Francis of Assisi preach in the streets, Clare confided to him her desire to live for God, and the two became close friends. On Palm Sunday in 1212, her bishop presented Clare with a palm, which she apparently took as a sign. With her cousin Pacifica, Clare ran away from her mother‘s palace during the night to enter religious life. She eventually took the veil from Saint Francis at the Church of Our Lady of the Angels in Assisi, Italy.

Clare founded the Order of Poor Ladies (Poor Clares) at San Damiano, and led it for 40 years. Everywhere the Franciscans established themselves throughout Europe, there also went the Poor Clares, depending solely on alms, forced to have complete faith on God to provide through people; this lack of land-based revenues was a new idea at the time. Clare’s mother and sisters later joined the order, and there are still thousands of members living lives of silence and prayer.

Clare loved music and well-composed sermons. She was humble, merciful, charming, optimistic, chivalrous, and every day she meditated on the Passion of Jesus. She would get up late at night to tuck in her sisters who’d kicked off their blankets. When she learned of the Franciscan martyrs in Morrocco in 1221, she tried to go there to give her own life for God, but was restrained. Once when her convent was about to be attacked, she displayed the Sacrament in a monstrace at the convent gates, and prayed before it; the attackers left, the house was saved, and the image of her holding a monstrance became one of her emblems. Her patronage of eyes and against their problems may have developed from her name which has overtones from clearness, brightness, brilliance – like healthy eyes.

Toward the end of her life, when she was too ill to attend Mass, an image of the service would display on the wall of her cell; thus her patronage of television. She was ever the close friend and spiritual student of Francis, who apparently led her soul into the light at her death.
[www.Saints.SQPN.com]

Yesterday, a large delegation from Ottawa and Gatineau left for the Archdiocese of Valladolid, Spain, for the Days in the Diocese prior to the World Youth Day in Madrid.
We celebrated Mass in the Diocesan Centre Chapel, then bussed to Pierre Elliott Trudeau Airport in Dorval.  Our two overseas flights were on Air France, travelling via Charles de Gaulle airport for our transfer to Madrid. 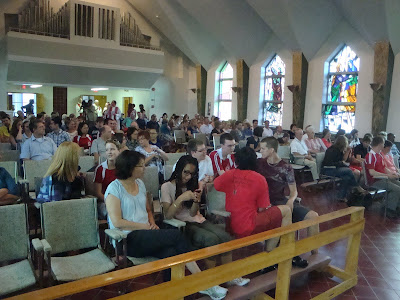 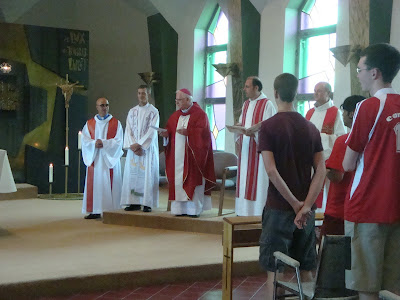 Some had left for Europe a few days prior, others will arrive a bit later.  When we are all together we will number 107.
Please keep us all in your prayers as we also bring the intentions of the religious, clergy and lay faithful of the Archdiocese of Ottawa on our pilgrimage.
Blogging will be intermittent, depending on access to internet technology and time.
God bless!
Posted by Archbishop Terry at 3:54 AM