Sunday in Ordinary Time 14A: Jesus, Gentle and Humble of Heart - L'Apôtre Saint Thomas, the Apostle 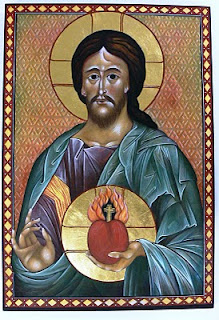 
St. Paul's teaching on the life Christians live in the Spirit is marvellously rich.  But it is also complex.  And at times it is hard to follow.  This may explain why the lectionary omits verse 10 in today's passage from Romans.  In it the argumentation takes a sudden turn that can appear bewildering to the reader trying to follow his line of thought.
Paul’s rhetorical training led him to create balanced parallel clauses and chiastic structures (an a-b-b’-a’ pattern) that set items in contrast.  “So then, ... we are debtors not to the flesh, to live according to the flesh—for if you live according to the flesh, you will die; but if by the Spirit you put to death the deeds of the body, you will live”.
As well, Paul oscillates between calling the Holy Spirit the Spirit of God and the Spirit of Christ.  Once he even went so far as to substitute Christ himself for the Christ's Spirit.  “You are in the Spirit, since the Spirit of God dwells in you.  Anyone who does not have the Spirit of Christ does not belong to him”.
Paul also begins to introduce into his teaching the eschatological dimension that he will develop more fully later in the chapter.  We will meet this more fully in next Sunday's selection from Romans.  “If the Spirit of him who raised Jesus from the dead dwells in you, he who raised Christ from the dead will give life to your mortal bodies also through his Spirit that dwells in you”.
For Paul, the presence or absence of the Spirit is what distinguished Christians from unbelievers.  God's Spirit indwells the believing disciple and, by implication, so does the Father and Christ.  We might describe this as the Trinitarian dimension of Christian existence.
Indeed, it is God the Father who grounds all creation and raises the dead.  As well, Christ risen from the dead has shared with believers his righteousness.  And the Spirit is the presence of both God and Christ in the believer now, guaranteeing him or her a future full of hope.
Paul wants Christians to draw hope from God's ultimate purpose in bestowing the Spirit on his people.  He believed that the end-time salvation would be theirs because it had already begun to take root in their lives.
After facing the unbelief of the Galilean towns of Chorazin, Bethsaida and Capernaum (Matthew 11:20-24), Jesus began to share with his disciples the intimacy of his special relationship with the Father (“no one knows the Son except the Father, and no one knows the Father except the Son and anyone to whom the Son chooses to reveal Him”).
Though experiencing resistance, Jesus praised the Father, knowing that His will was being worked out among those who were receptive.  Not the `wise and intelligent' but those who were childlike (“infants”) in their openness to God.
In addressing the “weary” and those “carrying heavy burdens”, Jesus had in mind those not yet His disciples.  His offer of rest, however, was given to all who shoulder His yoke.
In Judaism, the “yoke” was a common metaphor for obedience, subordination or servitude.  It generally referred to the observance of the Torah—all that God had made known of his purpose—and the keeping of God's commandments.
Jesus effectively claimed that his teaching was the full revelation of God's will for humanity.  In contrast with the teaching of Moses, which Jesus had already deepened (cf. Matthew 5.21-48), Jesus' instruction embodied God's purpose and demands.
Like Moses, once described as the gentlest person on earth (Numbers 12.3), Jesus remains “gentle and humble of heart”.  And, in his servant-like humility, Jesus offers the rest that God long ago had promised through Jeremiah (6.16).
“Rest” does not mean idleness or the absence of activity, but rather a deep sense of peace and well-being amid all the activities that mark the Christian disciple's engagement in family, society and church.
The future dimension of this rest—which Jesus offers even now in this world—is the fullness of salvation in the world to come.  In effect, then, Jesus' invitation and promise here are a summary of the gospel message, as well as the source of much consolation for believers.
* * * * * *

Grant, almighty God, that we may glory in the feast of the blessed Apostle Thomas, so that we may always be sustained by his intercession and, believing, may have life in the Name of Jesus Christ your Son, whom Thomas acknowledged as the Lord. Who lives and reigns with you.
Posted by Archbishop Terry at 7:37 AM