Sunday 15A: The Sower - Photos from the New York Bible Summit 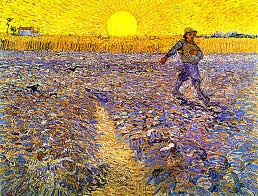 One day a junior high classroom was left unattended when the teacher was called away.  As the delay went on, the children became more and more restive, even rowdy.  The vice-principal looked in and, with a telling look of sternness, restored order.  When calm had settled over the children, she observed pithily, "when the cat's away, the mice will play".
As the children grasped the sense of the parable, several began to smile knowingly.  Then, after a few moments' delay, one student's hand shot up and he quizzically remarked, "but, Miss, we're not mice!"  Imperceptibly, in his mind the parable had become an allegory and, with it, the identification of cat and mice.
Today, the church begins to read Jesus' parables of God's Kingdom as they are found in Matthew's gospel.  All three of the synoptic gospels depict Jesus presenting a series of parables that begins with the parable of the sower and its interpretation.
Afterwards the number and order of parables associated with this one varies.  For example, Matthew and Mark both present the parable of the mustard seed, but Luke does not; Mark and Luke both present the parable of the lampstand and the bushel basket, but Matthew does not.
In the collection found in chapter 13--for there are other parables outside this grouping--Matthew presents seven parables (the number indicating fullness, completion): the parable of the sower (1-9); then three parables introduced by "another parable": the weeds (24-30), the mustard seed (31-32) and the yeast (33); finally, three parables introduced by "the Kingdom of Heaven is like": the hidden treasure (44), the pearl (45-46) and the net (47-48).
The interpretation of the parable of the sower, which shows a tendency toward allegorizing, is complemented, in Matthew, by two other interpretations of parables that are strongly allegorical in nature, that of the weeds (36-43) and the net (47-48).
Whether Jesus offered an interpretation of his parable of the sower is hotly debated by scholars.
A significant number would suggest that it originated in a preacher who tried to let the parable speak to the situation of the church, when it was noted that the "word of God" was welcomed in certain patterns that reflected the various spiritual dispositions found in different people.
What is incontrovertible is that Jesus taught in parables.  However, the arrangement and, to a degree, features of the parables depend on the evangelist who--like skilled preachers addressing very different congregations--shaped the telling of Jesus' parables to the listener's needs.
Take the yield produced by the sowing, for instance.  In Luke, it is spectacular, "a hundredfold" (Luke 8.8).  Mark's version depicts an increasing yield for the good seed, "thirty and sixty and a hundredfold" (Mark 4.8): all of which would be considered outstanding productivity.
Matthew, for his part, presents a decreasing outcome, "some a hundredfold, some sixty, some thirty" (13.8).  Now, while all the good seeds give outstanding yields, by comparison with the upbeat impression given by Mark and Luke, Matthew's harvest seems less enthusiastic.
In reading Jesus parables, interpreters try to ask what it might have meant in Jesus' life and ministry (Sitz-im-Leben Jesu), for the early church, as in the interpretation (Sitz-im-Leben Kirche) and in the vision of the evangelist's community (Sitz-im-Leben Evangelist).  This must be the prelude to asking, of course, what the parable might say to our church, our parish today.
Jesus tells a parable that shows--despite widespead loss of seed to the path, the birds, the thorns--good seed producing an extraordinary harvest.  We might say that through this parable Jesus was answering critics who scoffed at his ministry or was encouraging his disciples who might have be getting fearful about accompanying him.  Jesus reassured them that God would bring about an abundant fruitfulness.
The early church saw its own experience of losing early adherents but still growing in numbers.  Matthew, by showing the abundant yield diminishing from a hundredfold to thirty fold, might have been asking his fellow disciples to become more attentive hearers of the word.
Today, we might conclude from the parable that, despite signs that the church is beset by difficulties on all sides, God is the one who is in charge and will help the church pass through its trials to attain an abundant harvest.
* * * * * *


NEW YORK BIBLE SUMMIT #2
[SATURDAY, JUNE 25, 2011]
The Bible Summit took place in Cathedral High School (within the New York's Cardinal Terence Cooke Archdiocesan Center) and the Opening Mass took place in the Church of St. John the Evangelist, a parish next door to the administrative complex.
Some photos of the Eucharistic liturgy and my afternoon presentations, introduced by Mario Paredes, American Bible Society liaison with the Catholic community (English and Hispanic-speaking):
Photos: courtesy Fr. Tomas Del Valle-Reyes
Posted by Archbishop Terry at 7:29 AM