Seventeenth Sunday in Ordinary Time (Year "A") - July 24, 2011 - FINDING AND SEEKING GOD'S TREASURE, THE KINGDOM - [Texts: 1 Kings 3:5, 7-12 [Psalm 119]; Romans 8:28-30; Matthew 13:44-52]
Comparing Mark's fourth chapter with Matthew's thirteenth chapter, both of which depict Jesus' parables of the Kingdom, shows how much more complex and extensive Matthew's traditions are.
In Matthew's collection, the mustard seed parable gets matched with one about yeast that a woman used to leaven three measures of flour.  Matthew remarks that Jesus told the crowd nothing without a parable to fulfil prophecy and to reveal mysteries “hidden from the foundation of the world”.
Finally, unique to Matthew's gospel are the parable of the wheat and the weeds with its explanation—explored last Sunday—as well as this Sunday's brief parables of the hidden treasure, the pearl and the dragnet.  Like the parable of the weeds, the “net that was thrown into the sea and caught fish of every kind” announces a coming final judgment, of sorting and separating.
Two weeks ago, Jesus explained the purpose for His parables: “the reason I speak to them in parables is that ‘seeing they do not perceive and hearing they do not listen, nor do they understand ... so that they might not look with their eyes, and listen with their ears, and understand with their heart and turn—and I would heal them’” (Matthew 13.14-15).
This statement by Jesus, quoting Isaiah 6.9-10, remains puzzling.  It suggests that parables have a double purpose.  On the one hand, for those who have responded positively to Jesus, the parables communicate further insight and knowledge.  But for those who have rejected Jesus and His message, the parables have the effect of causing them to sink further into the dark.  In other words, commitment leads to knowledge, but unbelief leads to further ignorance.
But what message do the parables communicate to those who believe in Jesus?  Here we note that, like poetry and other works of art, parables contain greater depths of meaning than any single explanation offers.  Still, the parable of the mustard seed seems to say that the may initially be as humble as the mustard seed is small, but it is destined for impressive growth like the plant the mustard seed becomes.
Likewise, though Jesus' instruction about God's Kingdom is hidden, the transforming power of His gospel is as pervasive as yeast which a woman “took and hid” (the English “took and mixed” misses the Greek original's nuance of furtiveness, even subversiveness), thereby completely leavening the three measures of flour and providing enough bread, not for a family's needs, but for a great banquet.
The parables of the “treasure hidden in a field” and of the “one pearl of great value” are meant to be taken together.  Only a brief vignette of each situation is given, so that the central feature stands out.  Both protagonists go and sell everything for the sake of the one thing worth having.
God's Kingdom is compared neither to the treasure nor to the merchant.  Rather, it is the dynamic movement in each story that is the point of comparison with the .  Both the man ploughing in the field who unearthed a hidden treasure and the pearl merchant who was actively seeking a precious specimen found something beyond all their expectations.
Like the single-minded “pure of heart” whom Jesus praised in the Beatitudes (cf. Matthew 5.8), those who found both treasure and pearl gave all to possess the one thing that brought them joy.  So it is with God's Kingdom, it is worth sacrificing all to enter it.  The Kingdom becomes the source of ongoing joy for those who find themselves within it.
The importance of truly discerning what makes for happiness in this world appears not only in Jesus' parabolic instruction but undergirds Solomon's prayer for wisdom instead of riches.  God lavishly answered Solomon's prayer (“I give you a wise and discerning mind”).  Later God gave Solomon riches, too.
God-given wisdom helps disciples understand Paul's conviction that “all things work together for good for those who love God, who are called according to his purpose”.  God's plan for believers is that they “be conformed to the image of his Son” not only by their death to sin in the waters of baptism, but, as well, by how they live joyfully in this world the life of the Kingdom.
* * * * * *
THE MEMORIAL OF THE FOLLOWING
HOLY MEN AND WOMEN
WILL BE OBSERVED
IN THE NEXT FEW DAYS

Direct your faithful, Lord, in the way of eternal salvation which the Bishop Saint Apollinaris showed by his teaching and martyrdom, and grant, through his intercession, that we may so persevere in keeping your commandments as to merit being crowned with him. Through our Lord.

* * * * * *
July 21: Optional Memorial of Saint Lawrence of Brindisi, Priest and Doctor of the Church 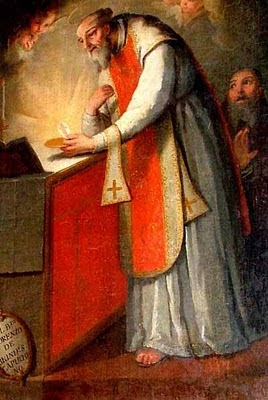 O God, who for the glory of your Name and the salvation of souls bestowed on the Priest Saint Lawrence of Brindisi a spirit of counsel and fortitude, grant, we pray, that in the same spirit we may know what must be done and, through his intercession, bring it to completion. Through our Lord.

O God whose Only Begotten Son entrusted Mary Magdalene before all others with announcing the great joy of the Resurrection, grant, we pray, that through her intercession and example we may proclaim the living Christ and come to see him reigning in your glory. Who lives and reigns with you.

O God, who guided Saint Bridget of Sweden along different paths of life, and wondrously taught her the wisdom of the Cross as she contemplated the Passion of your Son; grant us, we pray, that walking worthily in our vocation, we may seek you in all things. Through our Lord.