Sunday 5A: "You are the light of the world...the salt of the earth!" -- The Reconstituted Vox Clara Committee Meets 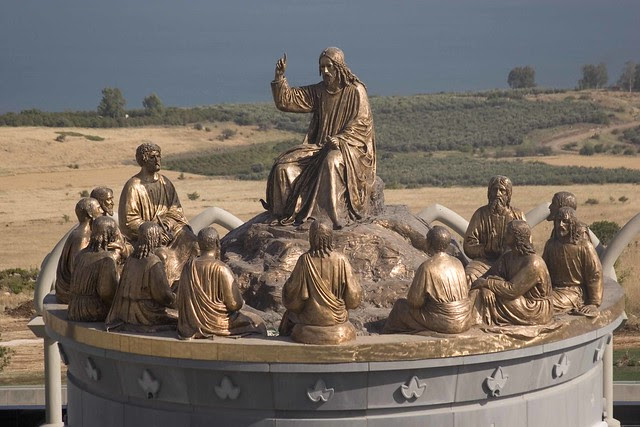 After Christ proclaimed the beatitudes to His disciples, He began to describe the missionary task of God's people vis-à-vis the world. Jesus chose primal symbols—salt and light—to initiate ongoing reflection by His disciples about their way of relating to the world and to the people on earth.

There is a certain provocative dimension to Jesus' declaration to His followers, “You are the salt of the earth...you are the light of the world". His co-religionists might have argued, instead, that the Torah or the Temple—the Holy City Jerusalem or the nation of Israel—exercised this function. Jesus already had in mind the universal mission to the Gentiles as He spoke to the small band that surrounded Him.

The meaning of salt is manifold. It was a key element in religious rites. In several Old Testament texts, salt is the element added to sacrifices; elsewhere reference is made to the ‘salt of the covenant'.

Sometimes salt was used to purify; it was also a condiment at meals. In the ancient world salt was a preservative. On occasion, it was linked with sunshine as one of the necessities of life.

To “eat salt” with someone was a sign of loyalty; the saying was also emblematic of peace between individuals. In rabbinic texts, salt represented wisdom; in the Greek tradition salt was variously described as “beloved of the gods” or the “spice of conversation”.

Given the wide range of possibilities in interpreting the salt saying, one might argue that Jesus' disciples are to think of themselves as the world's wisdom. That they could purify or preserve the world. That they ought to be willing to sacrifice themselves.

Like salt, the disciples have several characteristics, qualities without which they would stop being what they are and end up being useless. Salt does not exist for itself; it cannot salt itself. Just so Christians do not exist for themselves alone, but in relation to the world.

There have been arguments about whether, technically, salt can lose its savour or not. What can be said is that salt can become so adulterated with mineral impurities as to be useless for salting.

This serves as a warning to Christ's followers to continue to “be what you are”, to “be what God enables you to be”. If not, they may come to a sorry state, with only rejection as the fate awaiting them (“if salt has lost its taste ... it is thrown out and trampled under foot”).

In Matthew 4:16, the evangelist's readers learned that in Jesus God's light shone out upon Galilee of the Gentiles. Now, God's light shines also through his disciples.

Before bringing his exhortation to its powerful climax (“let your light shine before others, so that they may see your good works and give glory to your Father in Heaven”), two cautionary notes are voiced—much like the warning about salt losing its “taste”:

“A city built on a hill cannot be hidden”, Jesus noted. Nor do people, he said, “after lighting a lamp put it under the bushel basket”. Rather the purpose of the terra cotta lamp was to give light to all around it. For Christian disciples to hide their light would be to betray their vocation.

When Isaiah spoke of authentic “fasting” as that of loosing “the bonds of injustice, to undo the thongs of the yoke, to let the oppressed go free...”, he described the effect of true religion as “your light [breaking] forth like the dawn ... then your light shall rise in the darkness”.

In Jesus' view, the Church has a tremendous mission in its service of humanity. It is meant to be the primary location for God's activity for the world. In the words of the early Christian philosopher Diognetus, “what the soul is in a body, this the Christians are in the world”.

Paul was very aware that, from a human perspective, he had presented himself to the Corinthians “in weakness and in fear and in much trembling”. Yet these very liabilities of his became occasions for a “demonstration of the Spirit and of power”. For it is Christian belief that the world is illuminated by the “mystery of God”—Christ crucified, truly the Light of the World.


* * * * * *
CHANGES IN THE VOX CLARA COMMITTEE
FOR ENGLISH IN THE LITURGY
Over the summer months, several changes were made in the composition of the Vox Clara Committee: about half of the bishop members completed their terms and retired, some bishops were reappointed as members and still others were named as members; several new assistants and staff persons also joined the committee's work.
Our first session took place this week; another session is scheduled for mid-year.  The following is the press release following this session.
VOX CLARA COMMITTEE PRESS RELEASE
February 2-3, 2011
The newly appointed members and staff of the Vox Clara Committee met from February 2-3, 2011 in the offices of the Congregation for Divine Worship and the Discipline of the Sacraments in Rome. This Committee of senior Bishops from Episcopal Conferences throughout the English-speaking world was formed by the Congregation on July 19, 2001 in order to provide advice to the Holy See concerning English-language liturgical books and to strengthen effective cooperation with the Conferences of Bishops in this regard.


The Committee heard reports on the recent publication by the Congregation through the Vox Clara Committee of a study text with excerpts from the new English translation of the Roman Missal.

It is the hope of the members that the study text will be of assistance to Bishops throughout the English-speaking world in establishing programs of formation for Priests in preparation for the implementation of the Roman Missal.


The process for the completion of the Roman Missal, continuing initiatives for publications of the Lectionary for Mass by various Conferences, and the recent confirmation of the Grail Psalter were also discussed along with the effective refinement of structures and processes followed at all levels in the future development of English language liturgical texts.


The Committee discussed at some length the English-language translation of the Blessing of Holy Oils for the Chrism Mass and explored the means by which a text might be made available in time for use on Holy Thursday of 2012. As a text reserved for the use of the Bishop it is not included in the Roman Missal.


The Committee also looked to the continuing translation of the rest of the corpus of Roman Rite liturgical books as envisioned by the instruction Liturgiam authenticam. In particular, the Committee recommended to the Congregation the expeditious establishment of a plan of work by all collaborators in this work.


On the second day of the meeting, the Prefect of the Congregation, Cardinal Antonio Cañizares Llovera, and the Secretary, Archbishop Augustine Di Noia, O.P. met with the Vox Clara Committee.

Cardinal Pell began by thanking the Congregation for its consistent support throughout the years and recalled that with the work of the translation of the Roman Missal substantially complete, initiatives should continue around the English speaking world for its effective reception. In this regard, Cardinal Pell thanked the Prefect for his introduction to the Vox Clara study text with excerpts from the new English language translation.


Both the Prefect and the Secretary stressed the importance to the Church of providing authentic vernacular translations to strengthen ecclesial communion. They also thanked the members and advisors for the role of the Vox Clara Committee in providing a model of collaboration by which the principles of Liturgiam authenticam might be applied to the translation of the editiones typicae of the Roman Rite.


Finally, the Committee expressed satisfaction that the completion of the English translation of the Roman Missal has been welcomed throughout the English-speaking world.

The widespread development of formation programs for clergy and people and the publication of resources were acknowledged with gratitude by the Committee, which remains firmly convinced of the spiritual and catechetical value of this moment in the liturgical renewal envisioned by the Council Fathers almost a half century ago.

Posted by Archbishop Terry at 1:03 AM