St. Alberto Hurtado Cruchaga was canonized in October 2005 by Pope Benedict XVI; his feast day is observed today in Chile and in Jesuit communities worldwide.  Here is an interpretation of his life and vision published on the occasion of his canonization:

Alberto Hurtado Cruchaga was born in January 1901, the first son of well-to-do parents. Within five years his father was dead and his widowed mother had fallen on hard times, moving up from the coast to Santiago.

The boy was sent to St Ignatius College, one of Chile's most enduring Jesuit institutions, and when his mother's financial insecurity forced the Society to refuse him immediate admission to the novitiate, he embarked on law studies at the Catholic University.

Already a young man who stood out for the brilliance of his intellect, the zeal of his work with the poor and his capacity for friendship with young and old alike, his eventual departure to enter the Jesuits was marked by a special Mass celebrated by the Rector. Recognition of his singular magnetism accompanied him at every stage of his career.

Long years of Jesuit formation took him to Argentina, Spain and, when the Jesuits were expelled from there, to Louvain in Belgium where he wrote a doctoral thesis on pedagogy. Here was an audacious move. For he chose to study the thinking of John Dewey, a figure who represented just the kind of agnostic, gringo heresy which was anathema to established Catholic thinking of the epoch.

Alberto had no time for blinkered parochialism. Catholicism was a spirit of radical openness to truth, even if it came from sources opposed to the Church. Moreover, Dewey's thought is imbued with a concern for social context and pragmatism. Hurtado saw that, over time, confessional fixation on the centrality of one's intentions had led to a kind of Catholic unreality: as long as one means well, actual consequences do not matter too much. Applying such an approach to social action or education, Hurtado now realised, is catastrophic. It obliges people to do something but not does encourage them to think through what that something ought to be.

His thesis was an invitation to the Church to face reality rather than work from pre-fabricated positions, a message both threatening and empowering. In February 1936, Hurtado arrived back in Chile as a priest and promptly proceeded to threaten and empower in roughly equal measure.

In 1941, he published a book which sent shock waves through the country: Is Chile a Catholic Country? It was a provocative title which pointed up both the increasing mediocrity of Chilean Catholic life and the renewing force of his own vision. In its pages, he opened up an offensive against materialism, its toxic effects on the young, its atrophying of vocations, and, above all, the way its pernicious cultural impact aggravated the plight of the poor.

Alberto was years ahead of his time in his approach to social issues. ‘Injustice’, he insisted with enviable clarity, ‘causes far more evil than can be repaired by charity’. So he advocated and made his own the arduous tasks of reading, social analysis, planning action, establishing institutions and deepening that Ignatian contemplative regard which takes in the whole world and is free enough to see just how bad things truly are. It was the antithesis of feel-good, charitable giving, but he knew that in it he would find God.

With this in mind, he undertook a gruelling trip to post-war France to update his thinking. Once again he stood out from the crowd. A fellow Jesuit describes his intervention at a conference as ‘a cry of anguish but at the same time an irresistible lesson in pure, ardently supernatural zeal’.

The trip enthused him greatly. Doubtless, he had already begun to sense in Europe the tremors which would lead to Vatican II. The prophet in him, meanwhile, grasped the shadow-side of that renewal, an advancing secularism and ‘a tendency to forget the true values of the Church, its traditional vision’.

Few individuals can take in a truly panoramic vision, seeking refuge instead in petty dualisms: either charity or justice, either tradition or renewal. How did Hurtado sustain such imposing breadth?

He once wrote: ‘I am often like a rock that is beaten on all sides by the towering waves. For an hour, for a day I let the waves thrash against the rock; I do not look toward the horizon, I only look up to God.’

It comes, then, from a daily experience of a super-generous, ever-faithful God, a God who so desires the salvation of His creatures that human action is never merely human. It is that solidarity, even identification with Christ in the field of action which is both what made a St Alberto possible and forms the substance of his sanctity. The Ignatian exercises facilitate it and the Society of Jesus is its embodiment. It makes for a life that is taut, sprung, like an arrow soaring towards its target, veering neither towards a static contemplativeness nor a frantic activism.

And it makes tangible the great question which was always Alberto's criterion of discernment: ‘what would Christ do?’

This text is an edited and abridged version of an article by Damian Howard SJ published originally in The Tablet on 15 October 2005 (source: www.thinkingfaith.org). 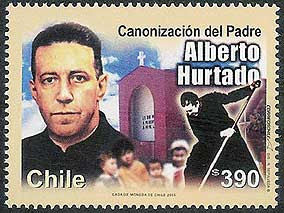 "You ask how I manage to put some balance into my life. This is a question I ask myself, as each day I am swallowed up more by my work - letters, telephone calls, articles, visits: the wearing routine of business - congresses, study sessions, conferences agreed to out of weakness, because I could not say no, or because I did not want to miss an opportunity to do good; bills to be paid, decisions to be made in the stress of unforeseen circumstances. Then there is some pressing apostolate, the urgency to arrive before materialism gains a complete victory. So often I feel I am on a rock, battered from all sides by rising waves. The only escape route is heavenwards. For an hour or a day, I let the waves beat upon the rock; I stop looking out to the horizon and only look upwards towards God. . .

"In God I feel a hope that is almost boundless. My worries disappear. I let them go, and I let myself go completely into his hands. . . I belong to Him, and He takes care of me and of myself. At long last my soul can surface once more tranquil and serene. Yesterday's worries, the thousand and one preoccupations about 'Thy kingdom come,' and even the dreadful torment I felt just now fearing the triumph of his enemies. . . everything gives way to calmness in God, the rock against which all waves break in vain, God, the perfect radiance marred by no shadow, God the all-conquering victor, dwells within me. I can reach him fully as the highest aim of my love. My whole soul is within him. And then, sweetly and surely, it is as if all life's trails, all the insecurities and uncertainties, had left me completely. I am bathed in light. He fills me with his strength. He loves me." [from the unpublished writings of St. Alberto Hurtado].
Posted by Archbishop Terry at 6:14 AM