Memorial of Saint Clare - Summer Time at the Cottage with Family

The Breviary says of her: "Following the example of St. Francis, she distributed all her possessions among the poor. She fled from the noise of the world and betook herself to a country chapel, where St. Francis himself sheared off her hair and clothed her with a penitential garb (on March 18, 1212, at the age of eighteen). Then she resided at the Church of St. Damian, where the Lord provided for her a goodly number of companions. So she established a community of nuns and acted as their superior at the wish of St Francis. For forty-two years she directed the nunnery with zeal and prudence, her own life serving as a constant sermon for her sisters to emulate. Of Pope Innocent IV she requested the privilege that she and her community live in absolute poverty. She was a most perfect follower of St. Francis of Assisi.

"When the Saracens [Muslims] were besieging Assisi and were preparing to attack the convent, St. Clare asked to be assisted as far as the entrance, for she was ill. In her hand she carried a vessel containing the blessed Eucharist as she prayed: O Lord, do not deliver over to beasts the souls that praise You! (Ps. 73). Protect Your servants, for You have redeemed them by Your precious Blood. And in the midst of that prayer a voice was heard, saying: Always will I protect you ! The Saracens took to flight."

Heroic in suffering (she was sick for twenty-seven years), she was canonized only two years after her death. Thomas of Celano coined the saying: Clara nomine, vita clarior, clarissima moribus. [The name for Clare in Latin and Italian is Clara, which is also the feminine form of the an adjective clarus mean "clear, bright or distinguished"; the comparative and superlative forms are clarior and clarissima.  So the saying means: "She was distinguished or bright in name, more distinguished by her life and most distinguished by her manners/character".]

Clare was the first flower in the garden of the Poor Man of Assisi. Poor in earthly goods, but rich in her utter poverty, she was a replica of Jesus, poor in the crib and on the Cross. At her time the Church generally and many Church men were enmeshed in financial matters and political maneuvering. Through the renewal of the ideal of poverty, St. Francis effected a "reform of Christian life in head and members."

In our twenty-first century there still remain large areas with millions suffering under extreme poverty. Poverty in itself is no virtue; but it should be made into a virtue. Let us recall a few of the examples and texts from holy Scripture which show how precious poverty is and what deep reverence we should have toward it. Christ was poor. His entrance into the world and His departure from it took place in circumstances of greatest need. He had no house wherein to be born, no crib; no house wherein to die, no deathbed. Poverty stood watch at birth and remained to see His death. "The foxes have dens and the birds of the air have nests; but the Son of Man has nowhere to lay His head" (Matt. 3:20).

At least we can be moderate and frugal, and thereby find the way to the spirit of Christian poverty. St. Clare, help us. [Excerpted from The Church's Year of Grace, Pius Parsch]

O God, who in your mercy led Saint Clare to a love of poverty, grant, through her intercession, that, following Christ in poverty of spirit, we may merit to contemplate you one day in the heavenly Kingdom. Through our Lord Jesus Christ, your Son, who lives and reigns with you in the unity of the Holy Spirit, one God, for ever and ever. 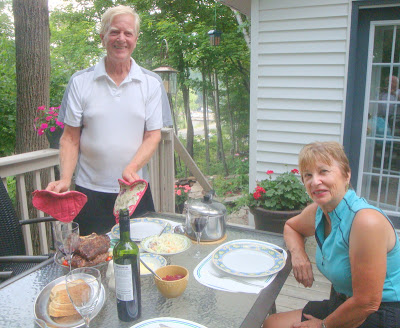 Today I will join family and friends of my brother-in-law John Bayfield to help anticipate his 70th birthday early next week.  He and my sister Marion have regularly welcomed me to their home in Barrie and cottage at Lake of  Bays, including earlier this month when these photos were shot.

Down the road at Dwight Beach there is a seniors' hall that hosts an anticipated Lord's Day Mass on Saturday afternoon, where I occasionally preside. Over the years, Father Gerard McMahon, pastor of St. Mary of the Assumption has been a gracious host for daily Mass at his parish church in Huntsville. 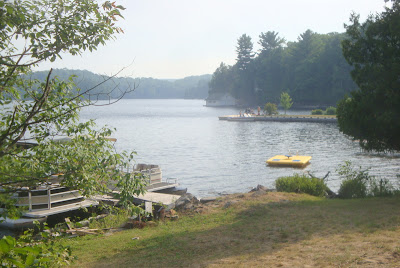 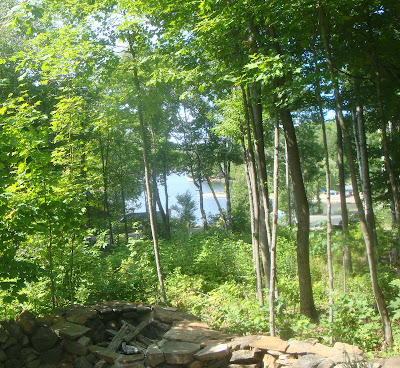 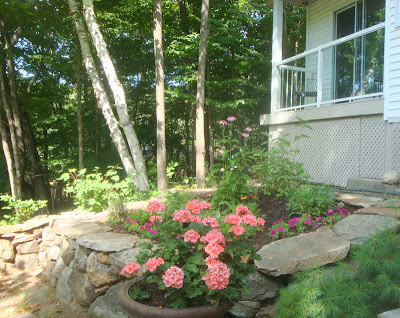 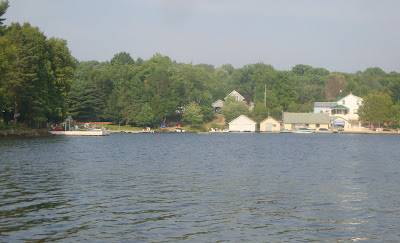 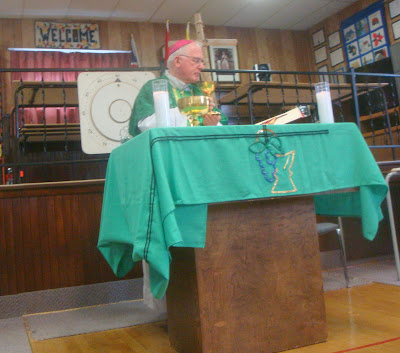 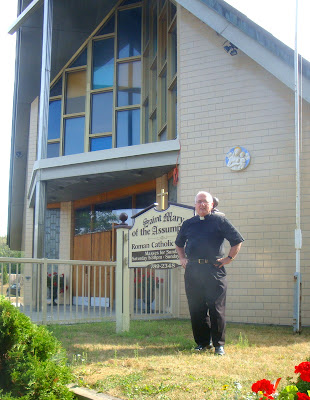