The feast of Pope St. Sixtus was held on the day of his death--August 6: four days before the martyrdom of Lawrence--until the introduction of the Feast of the Transfiguration on that day in the 15th century.

In the early Church, Saint Sixtus II was the most highly venerated Pope after St. Peter. His name is included in the first Eucharistic Prayer.

Sixtus converted to Christianity as an adult. He served as a deacon in Rome before he was consecrated as Pope on August 30, 257. Sixtus was the Pope for less than a year, before he was martyred. During his short reign he dealt with the controversy of Baptisms performed by heretics. His conclusion was that if a person had a sincere desire to be baptized, he was validly baptized despite the errors of the person performing the sacrament.

In the first three centuries of the existence of the Catholic Church, most of the Popes were martyred. Before Constantine issued the Edict of Milan in 313, which granted religious tolerance to Christians, there were ten major persecutions of Christians by the Roman Empire. In 257, the Emperor Valerian directed a major persecution against Bishops, priests and deacons.

During this persecution, Christians held their sacred assemblies in subterranean caverns called catacombs. These assemblies were expressly forbidden by Valerian. But Christians chose to obey the law of God, rather than the law of man. Pope Sixtus was seized while offering Mass at the catacombs of Praetextatus along the Appian Way. Sixtus was probably immediately beheaded after his arrest on August 6, 258. Some say that St. Sixtus was beheaded while still seated in the chair from which he had been addressing his flock. Others say that he was taken away for examination and returned to the scene for execution. Two deacons (Felicissimus and Agapitus), and subdeacons (Januarius, Magnus, Stephanus, and Vincentius) were killed on the same day.

Four days later St. Lawrence was martyred. According to legend, Sixtus met St. Lawrence on the way to his execution and predicted that Lawrence would follow him in a few days, but the legend cannot be verified. Saint Sixtus was buried at the nearby catacomb of Saint Callistus. Callistus was one of the predecessors of Sixtus who had also been martyred. The Christians enshrined the bloodstained chair, on which Saint Sixtus was beheaded, behind his tomb.

Here is a letter by Saint Cyprian announcing the death of Saint Sixtus II. Cyprian had sent representatives to Rome to get some news about the decree of Emperor Valerian. They returned with the painful news of the death of Pope Sixtus II.

My dearest brother, I was unable to send you a letter earlier because none of the clergy of this Church could move, being all under persecution, which however, thank God, found them inwardly most ready to pass at once to heaven. I now send you what news I have.

The envoys I sent to Rome have returned. I sent them to verify and report the decision taken by the authorities concerning myself, whatever it may be, and so put an end to all the speculations and uncontrolled hypotheses which circulated. And now here is the truth, duly ascertained.

Emperor Valerian has sent the Senate his rescript by which he has decided that bishops, priests and deacons shall immediately be put to death. Senators, notables and those who have the title of Roman knighthood shall be deprived of all dignities, as well as of their possessions. If they are obstinate in profess Christianity, even after the confiscation, they will be condemned to capital punishment.

Christians matrons will have all their goods confiscated and then be sent into exile. All imperial functionaries who have professed faith or should do so now, will suffer the same confiscation. They will then be arrested and registered for forced labour on the imperial estates.

Valerian also adds to the rescript a copy of a letter he has sent to the provincial governors concerning myself. I expect this letter any day and hope to receive it quickly, keeping myself firm and strong in faith. My decision in the face of martyrdom is quite clear. I am waiting for it, full of confidence that I shall receive the crown of eternal life from the goodness and generosity of God.

I have to report that Sixtus suffered martyrdon with four deacons on 6th of August, while he was in the "Cemetery" area (the catacombs of St. Callixtus).The Roman authorities have a rule that all who are denounced as Christians must be executed and their goods forfeited to the imperial treasury.

I ask that what I have reported be made known to our colleagues in the episcopate, so that by their exhortations our communities may be encouraged and ever more prepared for the spiritual combat. This will stimulate them to consider not so much death as the blessings of immortality, and to consecrate themselves to the Lord with ardent faith and heroic fortitude, to delight and not to fear at the thought of testifying their faith. The soldiers of God and of Christ know very well that their immolation is not so much a death but a crown of glory. 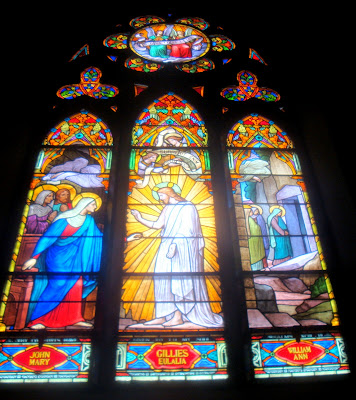 It is traditional for the Jesuits in English Canada to come together from across the country on the Feast of St. Ignatius.  This year we gathered in Guelph, where a number of the priests, scholastics and brothers had gathered with collaborators in Jesuit ministries for a retreat just prior to July 31.

Since the Jesuit Holy Rosary parish church was undergoing major renovations, the pastor of the Church of Our Lady Immaculate, Father Dennis Noon welcomed us to a church founded and directed by the Society of Jesus until 1931. Prior to the Mass, the letter of nomination of the principal celebrant, Jesuit Provincial Father Peter Bisson was read.

One of the Golden Jubilarians, Father Michael Stogre, gave the homily. The ten Jesuits who died during the previous year were remembered at the lighting of candles in their honour.

A reception in honour of the Jubilarians and their families was held at Holy Rosary Parish Hall afterwards (through the kindness of the CWL members). In the afternoon, the Jesuits made a visit to the cemetery to pray for the deceased, heard a presentation by the Provincial and several others and enjoyed a festive dinner.  Some photos follow: 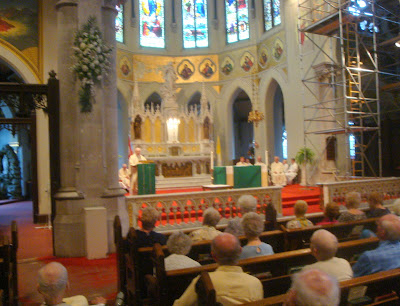 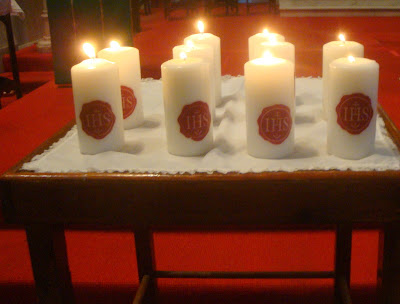 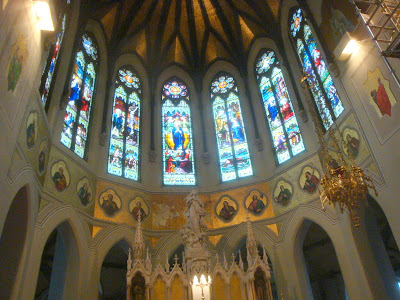 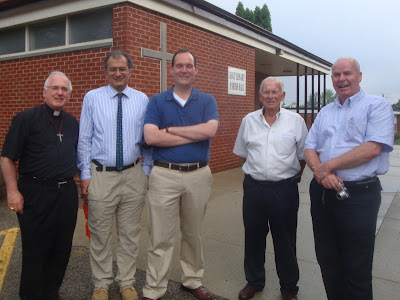 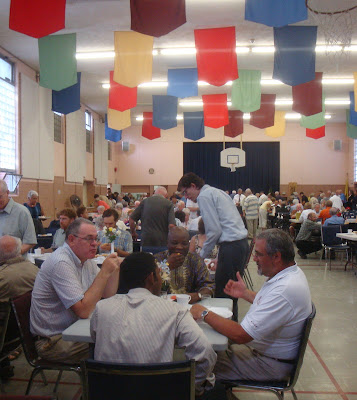 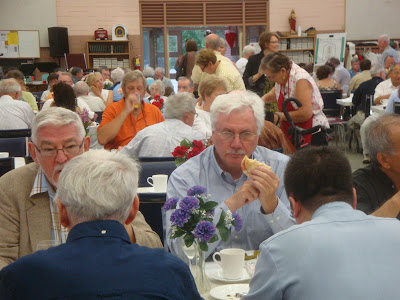 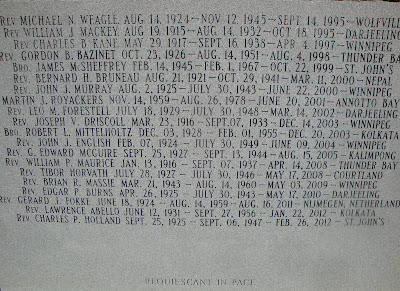 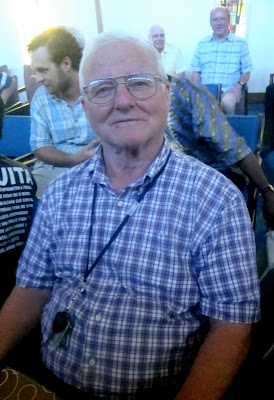 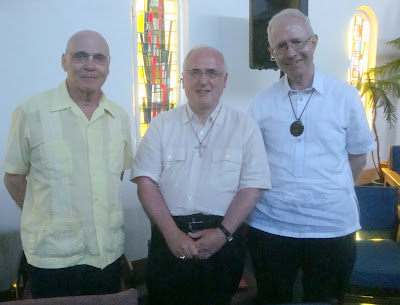 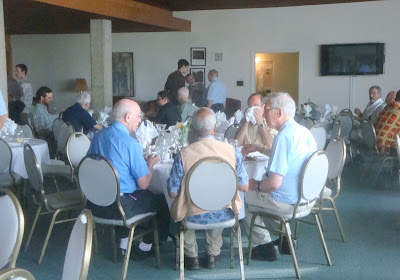 Posted by Archbishop Terry at 6:42 AM