﻿﻿﻿
﻿﻿﻿ ﻿
Strengthen in us, O Lord, the faith, by which the blessed Apostle Bartholomew clung wholeheartedly to your Son, and grant that through the help of his prayers your Church may become for all the nations the sacrament of salvation. Through our Lord Jesus Christ, your Son, who lives and reigns with you in the unity of the Holy Spirit, one God, for ever and ever. In the New Testament, Bartholomew is mentioned only in the lists of the apostles. Some scholars identify him with Nathanael, a man of Cana in Galilee who was summoned to Jesus by Philip. Jesus paid him a great compliment: “Here is a true Israelite. There is no duplicity in him” (John 1:47b). When Nathanael asked how Jesus knew him, Jesus said, “I saw you under the fig tree” (John 1:48b). Whatever amazing revelation this involved, it brought Nathanael to exclaim, “Rabbi, you are the Son of God; you are the King of Israel” (John 1:49b). But Jesus countered with, “Do you believe because I told you that I saw you under the fig tree? You will see greater things than this” (John 1:50b).

Nathanael did see greater things. He was one of those to whom Jesus appeared on the shore of the Sea of Tiberias after his resurrection (see John 21:1-14). They had been fishing all night without success. In the morning, they saw someone standing on the shore though no one knew it was Jesus. He told them to cast their net again, and they made so great a catch that they could not haul the net in. Then John cried out to Peter, “It is the Lord.”

When they brought the boat to shore, they found a fire burning, with some fish laid on it and some bread. Jesus asked them to bring some of the fish they had caught, and invited them to come and eat their meal. John relates that although they knew it was Jesus, none of the apostles presumed to inquire who he was. This, John notes, was the third time Jesus appeared to the apostles.

Bartholomew or Nathanael? We are confronted again with the fact that we know almost nothing about most of the apostles. Yet the unknown ones were also foundation stones, the 12 pillars of the new Israel whose 12 tribes now encompass the whole earth. Their personalities were secondary (without thereby being demeaned) to their great office of bearing tradition from their firsthand experience, speaking in the name of Jesus, putting the Word made flesh into human words for the enlightenment of the world. Their holiness was not an introverted contemplation of their status before God. It was a gift that they had to share with others. The Good News was that all are called to the holiness of being Christ’s members, by the gracious gift of God.

The simple fact is that humanity is totally meaningless unless God is its total concern. Then humanity, made holy with God’s own holiness, becomes the most precious creation of God. (Credit: American Catholic/Saint of the Day) 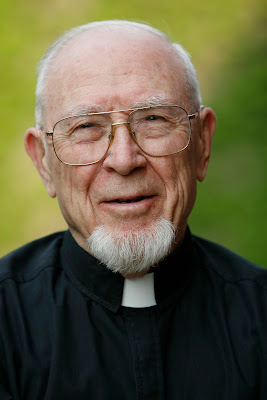 The Lord keeps calling home his long-time servants.  A few days ago, the senior man of the Jesuits in English Canada Province passed away.  He had served in Montreal for sixty years, so he was someone well-known to me from the years I was posted there (1967-1969) and during visits to Loyola College and later the Loyola Jesuit Community in Montreal.  May the Lord welcome him to the heavenly homeland.

Here is an edited version of the obituary prepared by the Jesuit curia:


Father J. Aloysius GRAHAM, S.J. died peacefully in the Lord at Rene Goupil House, the Jesuit Infirmary in Pickering, Ontario on August 20th, 2012 in the 97th year of his life and in the 78th year of life in the Society of Jesus.

James Aloysius Graham was born on July 17, 1916 in St. Mary's, Ontario, of James Graham and Bridget Quigley, and grew up in London, Ontario. He entered the Jesuits in 1933 and followed their regular program of studies; he also studied chemistry at the University of Toronto. He was ordained a priest on December 3, 1947 in Bogotá, Colombia.

Following his ordination Father Graham taught chemistry at Campion College, Regina from 1948-51and in 1952 was posted to Montreal to set up the department of chemistry at Loyola College. There he would remain for the rest of his life, first as professor, Department Chair and Dean of Science at Loyola, then as Vice-Rector of the new Concordia University and Principal of Loyola Campus, Secretary of Concordia's Board of Governors, as Superior of the Loyola Jesuit Community and President of Loyola High School.

In recent decades, “Father Al” lived and worked at the Resurrection of Our Lord Parish, Lachine, then at St. Thomas More Parish, LaSalle, while also serving from time to time in many parishes throughout the Island of Montreal and in Rosemere, QC.

In declining health, he moved recently to Pickering. Ever the gentleman, kind, good-natured with a warm smile, Father Al will be greatly missed by his many lay and Jesuit friends, and especially by the parishioners he served in the Montreal area.

The Funeral Mass of the Resurrection will be celebrated this morning at 10:30 a.m.at St. Ignatius Chapel Manresa-Jesuit Spiritual Renewal Centre, Liverpool Road North, Pickering ON. Interment will take place in the Jesuit Cemetery, Guelph this afternoon at 2:30 p.m. In memory of Father Graham, donations may be made to the Jesuit Development Office, 43 Queen's Park Crescent East, Toronto, Ontario, M5S 2C3.
Posted by Archbishop Terry at 6:08 AM