OM: St. Rose of Lima - Mass and BBQ with the Ottawa Seminarians

Rose of Lima, a member of the Third Order of St. Dominic, was the "first blossom of sanctity that South America gave to the world." Hers was a life heroic in virtue and penance. She expiated the evils perpetrated by the conquerors of the land in their lust for gold. For many her life was a silent sermon of penance.

Pope Clement X stated in the bull of canonization: "Since the discovery of Peru no missionary has arisen who effected a similar popular zeal for the practice of penance."

Already as a five-year-old child (born 1586), Rose vowed her innocence to God. While still a young girl, she practiced mortifications and fasts that exceeded ordinary discretion; during all of Lent she ate no bread, but subsisted on five citron seeds a day. In addition, she suffered repeated attacks from the devil, painful bodily ailments, and from her family, scoldings and calumnies.

All this she accepted serenely, remarking that she was treated better than she deserved. For fifteen years she patiently endured the severest spiritual abandonment and aridity.

In reward came heavenly joys, the comforting companionship of her holy guardian angel and of the Blessed Virgin. August 24, 1617, proved to be the day "on which the paradise of her heavenly Bridegroom unlocked itself to her." [Excerpted from Pius Parsch, The Church's Year of Grace]


* * *
O God, you set Saint Rose of Lima on fire with your love, so that, secluded from the world in the austerity of a life of penance, she might give herself to you alone; grant, we pray, that through her intercession, we may tread the paths of life on earth and drink at the stream of your delights in heaven. Through our Lord Jesus Christ, your Son, who lives and reigns with you in the unity of the Holy Spirit, one God, for ever and ever.

Earlier this week, the annual end-of-summer celebration with our Ottawa seminarians took place at my residence.  We began with Mass in the Archbishops' Chapel and followed it up with fellowship and a meal on the patio next to my quarters.

We bade farewell to Msgr. Joseph Muldoon who as Episcopal Vicar assisted me with the seminarian formation portfolio, as we also welcomed his successor Father Geoffrey Kerslake. The priest-residents Msgr Robert Latour and Mgr Gilles Lavergne also joined in, as did Father Mccauley, who is archdiocesan Vocations Director and Father Christian Riesbeck, CC, Chancellor of the Archdiocese, all under the watchful supervision of our chef Donald Demers.  Some other photos (taken by Robert DuBroy): 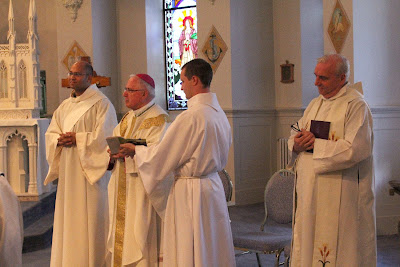 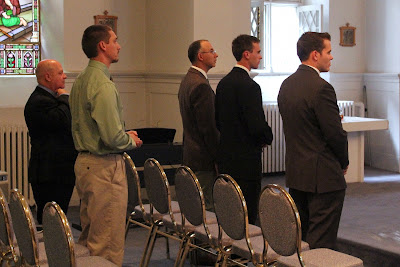 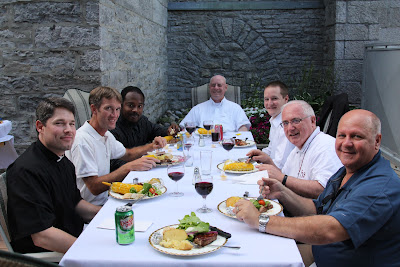 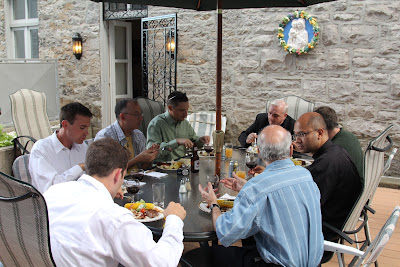 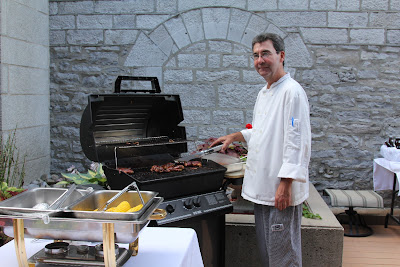 
Lord God, in every generation you have provided shepherds after your own heart and spiritual fathers for the family of the Church. Hear us in our day as we beg you: “Do not leave us orphans! Send us the Holy Spirit!”

Stir up in the hearts of those whom you have chosen to be priests an awareness of your call and the courage to say, “Let it be done to me according to your word.”

By your Spirit, mould them in the heart of Mary to be the image of your Son, faithful stewards of your grace. Shape them into zealous apostles, who will preach the Gospel with boldness, celebrate the Eucharist with reverence and be living signs of your love for all people.

We ask You this through Christ our Lord. Amen.
Posted by Archbishop Terry at 6:31 AM