Memorial of St. Monica, Widow - Celebrating with the Queenship of Mary Community in Metcalfe

St. Monica is an example of those holy matrons of the ancient Church who proved very influential in their own quiet way. Through prayer and tears she gave the great Augustine to the Church of God, and thereby earned for herself a place of honor in the history of God's kingdom on earth.

The Confessions of St. Augustine provide certain biographical details. Born of Christian parents about the year 331 at Tagaste in Africa, Monica was reared under the strict supervision of an elderly nurse who had likewise reared her father. In the course of time she was given in marriage to a pagan named Patricius. Besides other faults, he possessed a very irascible nature; it was in this school of suffering that Monica learned patience. It was her custom to wait until his anger had cooled; only then did she give a kindly remonstrance. Evil-minded servants had prejudiced her mother-in-law against her, but Monica mastered the situation by kindness and sympathy.

Her marriage was blessed with three children: Navigius, Perpetua, who later became a nun, and Augustine, her problem child. According to the custom of the day, baptism was not administered to infants soon after birth. It was as an adolescent that Augustine became a catechumen, but possibly through a premonition of his future sinful life, Monica postponed his baptism even when her son desired it during a severe illness.

When Augustine was nineteen years old, his father Patricius died; by patience and prayer Monica had obtained the conversion of her husband.

The youthful Augustine caused his mother untold worry by indulging in every type of sin and dissipation. As a last resort after all her tears and entreaties had proved fruitless, she forbade him entrance to her home; but after a vision she received him back again. In her sorrow a certain bishop consoled her: "Don't worry, it is impossible that a son of so many tears should be lost."

When Augustine was planning his journey to Rome, Monica wished to accompany him. He outwitted her, however, and had already embarked when she arrived at the docks. Later she followed him to Milan, ever growing in her attachment to God. St. Ambrose held her in high esteem, and congratulated Augustine on having such a mother.

At Milan she prepared the way for her son's conversion. Finally the moment came when her tears of sorrow changed to tears of joy. Augustine was baptized. And her lifework was completed. She died in her fifty-sixth year, as she was returning to Africa. The description of her death is one of the most beautiful passages in her son's famous "Confessions." (Excerpted from Pius Parsch, The Church's Year of Grace)

O God, who console the sorrowful and who mercifully accepted the motherly tears of Saint Monica for the conversion of her son Augustine, grant us, through the intercession of them both, that we may bitterly regret our sins and find the grace of your pardon. Through our Lord Jesus Christ, your Son, who lives and reigns with you in the unity of the Holy Spirit, one God, for ever and ever. 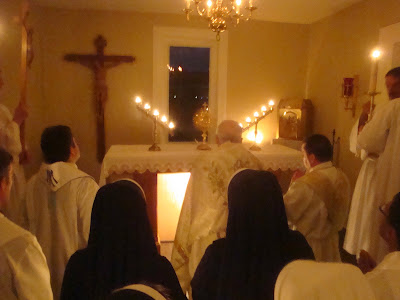 The evening's structure was rather simple: a light supper shared by the members with several priests and me in their dining room, the blessing of the house and chapel, through the kindness of Pastor Father Anthony Hannon, Mass at St. Catherine of Siena Parish Church, with numerous parishioners taking part, joined by friends and benefactors.

Following Mass, we processed with the Blessed Sacrament through the streets for the 750 meters distance to the convent (with a police escort).  A modest and crowded reception followed in the convent.  Some other photos: 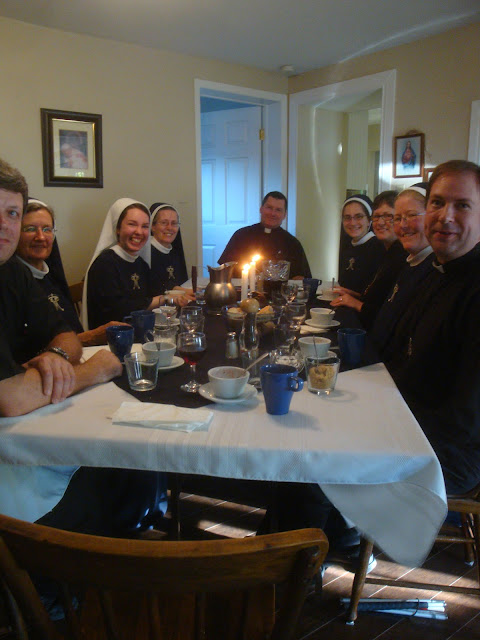 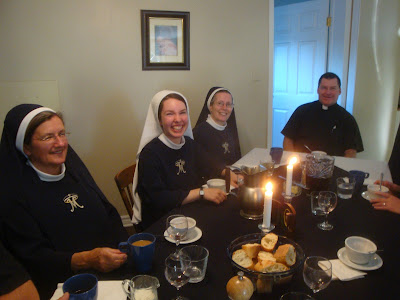 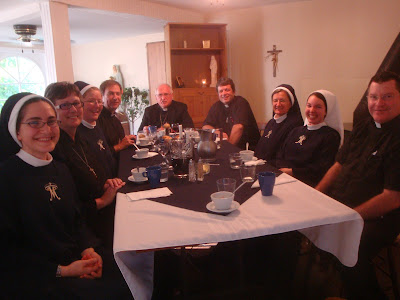 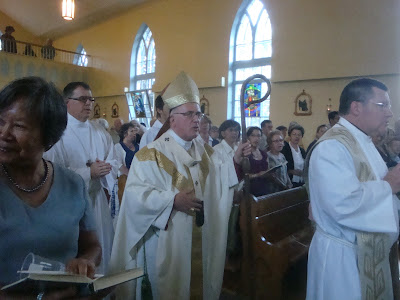 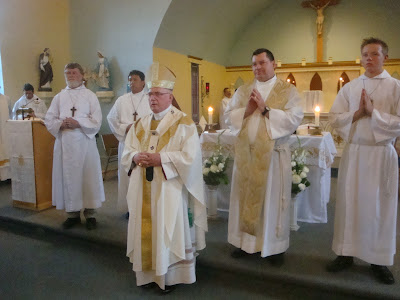 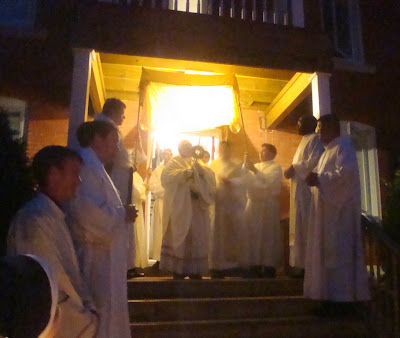 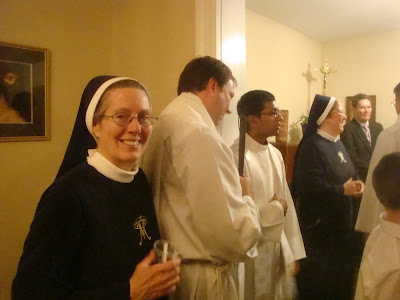 Posted by Archbishop Terry at 6:19 AM