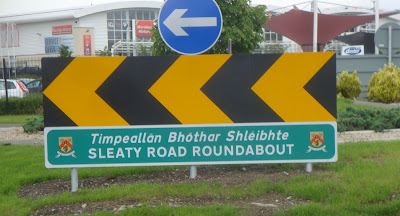 Sleaty, Sletty, or Slatey (Sléibhte, 'mountains', in Irish) is a civil parish in . It is situated some 2 km north-north-west of the town of .

Titular Dioceses are entrusted to bishops who don't have a diocese of their own (e.g., auxiliary bishops, apostolic nuncios, etc).  Many of these are in North Africa or Turkey where once thriving communities no longer exist.  But some are found in places where there are vibrant Christian communities but where the ancient diocese was suppressed in some restructuring.  Thus, when I was named an auxiliary bishop in Toronto in 1995, I was given the earliest diocese in Leinster, Ireland, Slebte (though it has other spelling--cf. above).

The first bishop was St. Fiacc--father of St. Fiacre--whose story is told below (courtesy of stbrigid-undertheoak.blogspot.com).

Saint Fiacc (c. 415-520) was a poet, the chief bishop of , and founder of two churches. His father, MacDara, was prince of the Hy-Bairrche in the country around . His mother was sister of Dubhtach, the chief bard and brehon of , the first of Patrick's converts at Tara, and the apostle's lifelong friend.

Fiacc was a pupil to his uncle in the bardic profession and soon embraced the Faith. Subsequently, when Patrick came to Leinster, he temporarily stayed at Dubhtach's house in Hy-Kinsellagh and selected Fiacc, on Dubhtach's recommendation, to be dedicated bishop for the converts of .

Fiacc was then a widower; his wife had recently died, leaving him one son named Fiacre. Patrick gave him an alphabet written with his own hand, and Fiacc acquired with marvellous rapidity the learning necessary for the episcopal order. Patrick consecrated him, and in after time appointed him chief bishop of the province. Fiacc founded the church of Domnach-Fiech, east of the Barrow. Dr. Healy identifies its site at Kylebeg.

To this church Patrick presented sacred vestments, a bell, the Pauline Epistles and pastoral staff. After many years of austere life in this place, Fiacc was led by angelic command to remove to the west of the Barrow, for there "he would find the place of his resurrection". The legends state that he was directed to build his oratory where he should meet a hind, his refectory where he should find a boar. He consulted Patrick, the latter fixed the site of his new church at Sletty—"the highland"—a mile and a half northwest of Carlow.

Here while built a large monastery, which he ruled as abbot while at the same time he governed the surrounding country as bishop. His annual Lent retreat to the and the rigours of his Lenten fast, on five barley loaves mixed with ashes, are mentioned in his life by Jocelyn of Furness. He suffered for many years from a painful disease and Patrick, commiserating his infirmity, sent him a chariot and a pair of horses to help him in the visitation of the diocese. He lived to a very old age; sixty of his pious disciples were gathered to their rest before him.

His festival has been always observed on the 12th of October. He was buried in his own church at Sletty, his son Fiacre, whom Patrick had ordained priest, occupying the same grave. They are mentioned in several calendars as jointly revered in certain churches.

St. Fiacc is the reputed author of the metrical life of St. Patrick in Irish, a document of prime importance as the earliest biography of the saint that has come down to us. A hymn on St. Brigid, "Audite virginis laudes", has been sometimes attributed to him, but on insufficient grounds. [This article incorporates text from the public domain Catholic Encyclopedia of 1913] 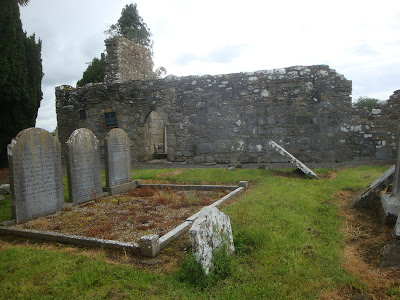 My friend and fellow Jesuit Peter Sexton drove me to Carlow Town last Thursday where, not far from the College of Knock Beg, in the diocese of Kildare and Loughlin, we were able to view the ruins of the ancient diocese of Sleaty. 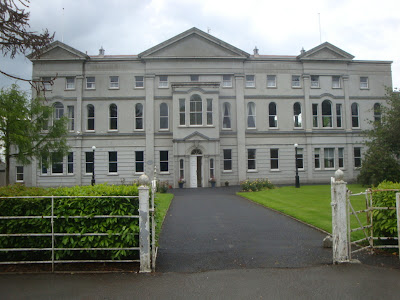 Here are some photos taken on that occasion, including an historical marker: 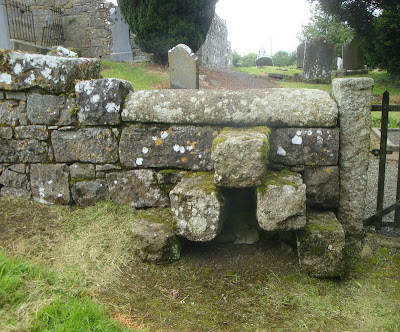 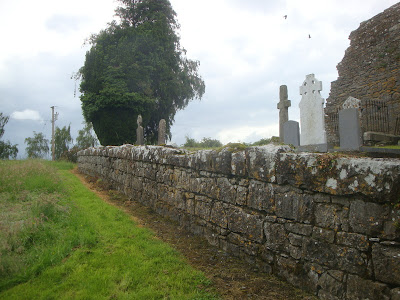 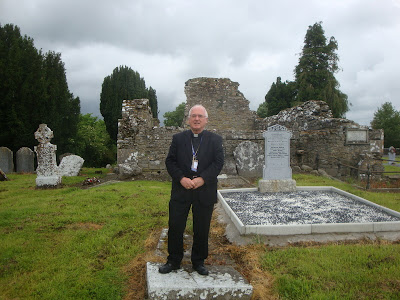 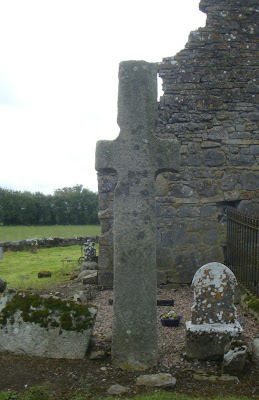 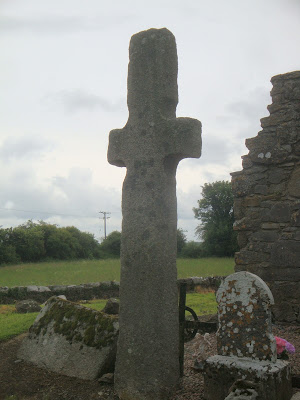 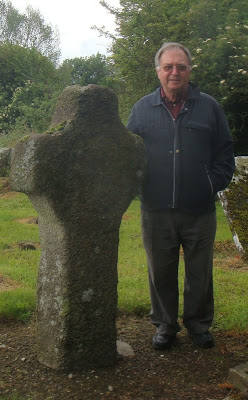 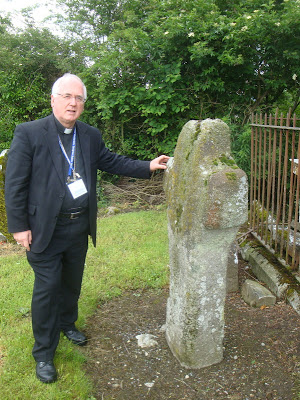 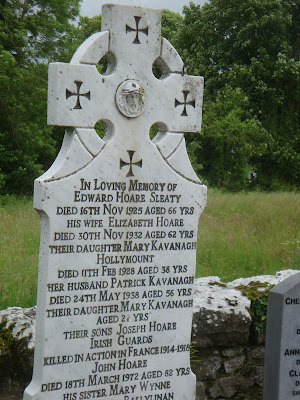 Before leaving the grave-yard Father Peter and I prayed for all the faithful of the past and present dioceses begun by St. Fiacc's ministy, especially for Sister Gerard (Eileen) McLoughlin, RSM, who worked at the Newman Centre in Toronto when I was auxiliary there and who told me of the location of Sleaty and said, "you must visit" and "you'll be very welcome"!

THE JOURNEY CONTINUES WITH A FLIGHT DELAY 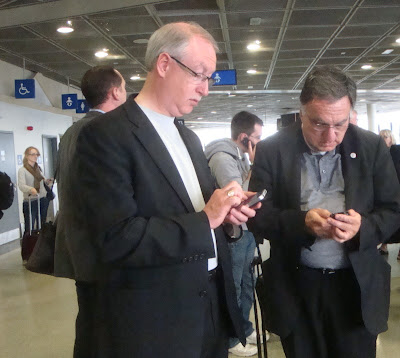 In his closing remarks at the Statio Orbis Mass, Archbishop Martin told us that the journey "to become what we receive" in the Eucharist had only begun.

Little did we expect that that would mean a stay-over in Dublin for another day and night.  Our Air Canada flight experienced a technical malfuntion which meant delaying the flight from yesterday to today. Not only that but, at the City North Hotel where we were lodged the Wi-fi system was down: imagine what this implied for our interconnected life-style (cf. above)!

This is being written up in the airport lounge and  we hope to be airborne fairly soon and home again.  The life of the pilgrim in modern culture! 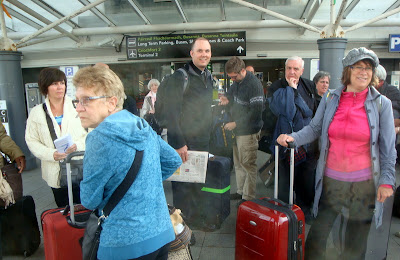 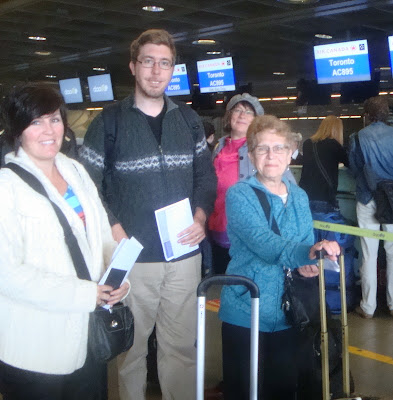 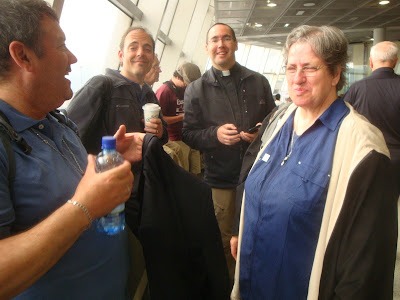 Regrettably, this flight cancellation and delayed return makes it impossible for me and my episcopal vicars to attend the funeral of Mgr Andre Drouin, beloved priest and long-time pastor at Sainte Anne's Church in Ottawa, devoted servant of the poor and needy (AIDS victims, street people, clients of the St. Vincent de Paul Society).
* * * * * *


REQUIESCAT IN PACE
Posted by Archbishop Terry at 2:24 AM