The Opening Days of the Dublin Eucharistic Congress

As the photos show, the opeing ceremonies at the IEC were colourful and touching. The presentations in the programme before Mass gave a striking account of the richness of Catholic life in Ireland over the centuries, especially in times of persecution and martyrdom.

The Opening Mass presided by Cardinal Ouellet on Sunday afternoon was reverent and moving. The bright sunny afternoon put everyone in a great mood and there were frequent exchanges with perfect strangers from many countries and all over Ireland.

Yesterday, the English Mass organized by the Canadians drew people from all over as it was on the RDS site and convenient: the hall, they tell me, was packed.  I had agreed, before the time-table for this Mass had been set, to preside at a Pontifical Extraordinary Form Mass in Saint Kevin's Church, Harrington Street, where between 400 and 500 faithful were in attendance.  I expect to receive photos from the Parish later in the week.

Yesterday afternoon, there was an ecumenical celebration of baptism led by Rt. Reverend Michael Jackson, Archbishop of Dublin and Glendalough. 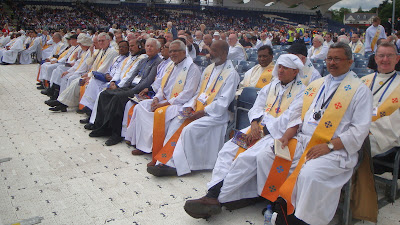 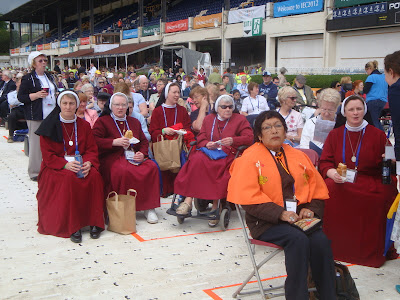 Posted by Archbishop Terry at 5:25 AM