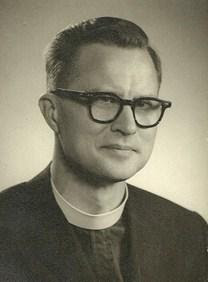 Even in this age of instantaneous communications, news sometimes gets overlooked or one does not get informed because others think you must already know.  So, it was a couple of days ago that I learned of the death in March of one of my colleagues at Atlantic School of Theology, the Anglican divine and Oxford graduate Dr. John B. Hibbitts.

When I began teaching as a rookie at AST in Halifax in the fall of 1975, my two associates were nearing retirement, the late Dr. John (Ian) Hardie, of Presbyterian origin from Glasgow who served as a United Church minister and Professor of Old Testament and John Hibbitts, who taught both testaments (the historical books of the OT and the Johannine Corpus in the NT).

"Doctor Hibbitts" was the kindliest person in our community, with always a kind word for everyone (he could see the best in each student and his affection was reciprocated).  He continued to correspond with me every Christmas with ever an encouraging word.  I shall miss his regular updates on what was going on in Halifax, with news of his family, of his wife June who passed away some years ago and about his two sons of whom he was quite proud.

The obituary informs of features of his life that I had not known:


Rev. Dr. John Bernard Hibbitts - 93, died Saturday March 24th in the Halifax Infirmary, QEII. Born in Halifax, Nova Scotia, the son of John T. and Ethel A. (Wambolt) Hibbitts (of Mount Uniacke and Halifax), he graduated from the Nova Scotia Normal College with a Superior First Class teaching certificate and a scholarship. He taught in the Nova Scotia schools as teacher and principal. He was employment agent responsible for hiring at the Halifax Shipyards, then with 3000 workers.

He entered Dalhousie University, graduating with highest honours, the Governor General's Gold Medal and the university medal for highest standing in Arts and Science. He received his MA in English in 1946. He was for many years an honorary judge for the Hon. W.H. Dennis prizes in prose and verse at Dalhousie, one of which he had won as a student. He lectured in the English Seminar at the University of Bonn, in Germany. He entered the Divinity School of the University of King's College and obtained a master's degree in Sacred Languages, Greek, Latin, and Hebrew. He enrolled in the General Theological Seminary, New York, where he was ordained an Episcopal (Anglican) priest and appointed a Fellow and Tutor in 1948 and received masters' degrees in Divinity and Sacred Theology. He worked in parishes in New York, NY and Newark, NJ.

He went to Oxford University as a member of University College and worked in the Oxford diocese, being acting chaplain in his college for a term. In 1954 he received his doctorate of philosophy in theology from Oxford and came to the University of King's College as an associate professor in divinity. He held a number of offices at King's, being Dean of Men, acting Librarian, priest in charge of King's Chapel, professor of Biblical Studies and Dean of Divinity. He was a member of the King's Board of Governors for 20 years. He was an examiner for degrees in Divinity for the Anglican Church of Canada and served on committees of its General Synod on theological education and ministry, was archivist for the Provincial Synod and worked on Nova Scotia diocesan committees. He wrote for international, national, and local publications and was a member of international and national learned theological societies. His lectures on Henry Hammond, a Caroline divine, given at Evanston, Illinois, were published.

In 1971 he began teaching at the Atlantic School of Theology in Halifax as professor of Scripture Studies, where he remained until his retirement in 1983, although he continued to teach part-time until 1987. In his later years he began the study of Spanish and traveled frequently to South America, especially Chile. During his teaching career he taught clergy and laypeople of many Christian churches, including Salvation Army officers and Greek Orthodox priests, and in his own denomination nearly a dozen future bishops in Canada, the United States, Japan, Pakistan and Nigeria passed through his classes. In the last period of his teaching career he was beset by heart problems that he felt hampered his performance. He received honorary doctor of divinity degrees from Pine Hill Divinity Hall and from King's where he was an Inglis Professor, an honorary title at his death.

He said he had had four vocations, that of a student and scholar, that of a teacher, that of an Anglican priest, and that of a husband, father, and grandfather, all of which enhanced and broadened his life. He is survived by his children, Bernard (Carrie) Hibbitts of Pittsburgh, Pennsylvania, USA; Paul (Sheila) Hibbitts of New Westminster, BC; grandchildren William Hibbitts of Pittsburgh, Pennsylvania, USA; and Marika June Hibbitts of New Westminster, BC. He was predeceased by his wife June and his sister Marguerite.  His funeral took place on March 29th in Halifax.

The family wishes to express publicly their deep gratitude to the officiating clergy, to the physicians, nurses and staff of the Halifax Infirmary, QEII and all the physicians and staff of Halifax hospitals over the years who looked after him, to his personal family physician Dr. D. Wood, to his specialists Dr. R. Gregor, Dr. J. Sullivan, Dr. J. Wood, and especially to his caregivers Joann and Rosalie, who provided outstanding personal care and constant companionship in his final years, enhancing those with their warmth, compassion and extraordinary dedication in good times and bad.

The family would also like to thank his neighbours – old and young alike – for taking the time to chat with him as he sat out on his front porch whatever the weather, and for their many other kind gestures. Lastly, the family wishes to acknowledge the many contributions of Metro Transit bus operators and Halifax cab drivers who, after he became unable to walk long distances as he had once done on his own or with his young sons, enriched his life by their service and consideration.


In gratitude for his friendship and fellowship in the Christian ministry of Scriptural scholarship, I commend him to the Lord's mercy and pray for the consolation of those he leaves behind.

REQUIESCANT IN PACE
Posted by Archbishop Terry at 6:13 AM