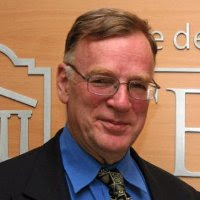 Dear brothers and sisters in Christ:

Catholic Christians believe that the Mass is the supreme gift that we can give to a person when they die. When we greeted André’s body at the door, we said that we were surrounding him with the Church’s prayer and asking that the promise made to him in baptism—that he would one day inherit eternal life—might be fulfilled. We pray for André and those who loved him and now cherish his memory.

We pray that our friend and brother in Christ will accept the great invitation from God to enter into the fullness of eternal life.

We meditate, too, on the Scriptures we have just heard. Reflecting on the first reading from the book of Wisdom: we see that in the eyes of the unwise—those of unbelievers—the person we cherished appears to have died and that is the end of it; but we know in faith that it is not the end. We know, following the teaching of St. Paul’s first epistle to the Corinthians that death will be swallowed up in the victory of the Risen Lord Jesus.  As Paul says in his epistle to the Romans, in baptism we died with Christ and began to share in his risen, eternal life. We believe also, according to Jesus’ promise in the gospel, that in death He comes to take us to himself to share with us an eternal dwelling-place in heaven.

Jean-André Potworoski was born in 1947 in Lyon, France. He immigrated to Canada with his family in 1953 where he attended first Loyola High School and then Loyola College. Having developed a love of science, he then went to the University of Toronto to do a PhD in physical chemistry.

There were three children from his second marriage: Charles 23, Christian 18, and Clara 16. All three are now living with their mother Barbara.

André was proud of his Polish heritage and faithful to his family’s cultural traditions. Through his mother he was the grand-nephew of Metropolitan Andryj Szeptycki of the Ukrainian Catholic Church and was equally proud of this lineage. During his doctoral studies, he stayed at the pretty exclusive Massey College. There, he was known for organizing bicycle races (he owned a small folding Raleigh bicycle); the circuit was the length of the basement maintenance corridors, which formed a complete loop underneath the college. These races were held at night, and the janitor wondered during the day about the provenance of the mysterious skid marks. He was also known for whistling Bach whenever he walked. The Master of the college, the author Robertson Davies, said of him “His Bach is worse than his bike.”

Later, he went back to school and completed the MBA from Harvard. He continued this involvement with Harvard by reawakening and leading the Harvard Alumni’s Ottawa chapter. [When I arrived in Ottawa, André presented me with a Harvard Business School publication on “How to Manage Change” which to this day rests on my night-table not completely read.]

From his early days in government service, his involvement in the Conserver Society, his friendship with Fr. Bill Ryan, he was an advocate of responsible management of resources and the protection of the environment. He was particularly excited at the publication of Laudato Si, the recent encyclical on the environment by Pope Francis. He even participated in a group discussion on the subject of the encyclical in his home less than a week before his death. His excitement at the Church’s involvement in this issue at the highest level was difficult to contain.

In later life, he met the lay Catholic movement Communion and Liberation founded by Luigi Giussani. He was attracted by the lack of dualism there between faith and life and the absence of moralism. There was a small community here in Ottawa and he quickly saw it as his place of belonging in the Church. The summer vacations sponsored by CL were a favorite for him and his children. He helped to organize the yearly Way of the Cross through downtown Ottawa which drew close to a thousand people. Friends from CL were crucial for him in facing the greatest challenge of his life.

In 2011, he was diagnosed with multiple myeloma, a form of terminal cancer. In a letter to his brother he explained how he saw things. During a retreat the previous year at St. Benoit-du-Lac, he prayed for greater clarity in discovering God’s will for his life. A year later, he saw his illness as the answer to that prayer. This is what was being asked of him. This is what was given to him; this was his vocation. There was of course much rebellion on his part, but it was clear that the illness was to be lived in a relationship with God. He had an acute awareness of the different graces that came with the illness. He found renewed strength to focus on the happiness of his children. This was translated in multiple trips with one or more children to visit family in Alberta, British Columbia, or with trips to Poland, Britain, or Rome.

In addition, he was aware of the effect his illness had on members of the local CL community. In an almost detached way, he observed how his growing dependence provoked others to engage in charitable activity towards him. His illness allowed him to have conversations about matters of faith of a depth that he never imagined previously. Throughout these last years he remained profoundly at peace with this new vocation.

To say André offered his suffering is misleading. It suggests a personal project or a moral strength as a basis for a spiritual activity. His illness and his suffering were indeed an offering, but out of dependence, out of an acceptance of what was given as an answer to his prayer. This peaceful acceptance of illness as gift gave his suffering vicarious value. Following the Letter on Suffering of Saint John Paul II, someone André greatly admired, such suffering bears fruit. We can only suppose that some of this fruit will become a blessing on the lives of his children and friends.

Now, a word about André’s humour.  Soon after his diagnosis, André joined the Myeloma Support Group in Ottawa where he made many friends. He soon became co-chair of the group and assigned everyone some homework for the next meeting: everyone had to come back with at least one joke. His medical file at Ottawa General Hospital notes that every meeting with a specialist or a technician would inevitably end with the telling of a joke or the sharing of a New Yorker cartoon on his iPad. As Peter Stockland wrote in one his columns, André’s humour, whether corny or risqué, was a conscious strategy to reject a common reading of illness and suffering and to provoke a higher reading based on his newly discovered vocation.

Dear friends, through this year we have been hearing at Sunday Mass selections from the Gospel of Mark, most recently with the teachings of Jesus on marriage, divorce, family life, children, the use of riches. On Sunday we will hear Jesus teach about true servant-leadership wherein those who wish to be great make themselves last of all and servants of all. We have heard Jesus’ radical teaching and a summons to embody it in our lives.

As André did throughout his life, we struggle to learn it, to accept it and to live it. We know that we cannot go it alone if we are to become what Pope Francis challenges us to be: missionary-disciples of Jesus. That is why we need each other, why we need community, why André loved this parish community of Notre Dame Basilica and other churches he frequented. He relished being with fellow Christians who aspired to allow Christ to encounter and touch them with grace so as to be able to invite still others into fellowship with Christ and his followers.

Dear brothers and sisters, the gift we offer André today is also a gift to ourselves because we are reminded that one day each of us will stand before God and be held accountable for what we have done and not done. Did we give good example? Did we reach out to the lost, lonely and needy; did we speak up for those who had no voice? Have we prayed, worshipped God, attended to our life of faith? Our words and actions have consequences.

At a Catholic Christian funeral we remember that every one of our days and our deeds has eternal consequences. Someday we too will enter the great mystery of death. Someday our body will be carried into church so friends and family will offer us this great gift. This isn’t meant to frighten us but to challenge us to be the best version of ourselves we can be. André wasn’t perfect, but he struggled to be faithful to his encounter with Christ in baptism.

The life of a baptized Christian is not meant to be like a shooting star that lights up the world for a few minutes. We are to let our light shine every day, caring for our children, getting up and going to work, caring for the needy that God sets on our path, by sharing our means, our meals, our lives and our love.

We will now offer the Eucharist for André’s soul. We join with his children, brothers, friends and acquaintances, and with the angels and saints in heaven, as we pray for André: Eternal rest grant unto him, O Lord, and let perpetual light shine upon him.

May his soul and the souls of all the faithful departed, through the mercy of God, rest in peace. Amen.
Posted by Archbishop Terry at 4:00 PM