On Friday I will attend the funeral in Montreal of a dear Jesuit colleague:

Priest had a passion for film


A Montreal priest with a passion for world cinema, Marc Gervais was an influential educator, film consultant and author of scholarly works on Ingmar Bergman and Pier Paolo Pasolini.
He died late Sunday afternoon, age 82, at a Jesuit retreat in Pickering, Ont. His funeral is Friday at his parish church next to Concordia University's Loyola campus, where he taught for decades.
Gervais had been suffering from dementia for several years when he passed away. He is survived by his brother, André, a prominent Montreal lawyer, and his sister, Connie.
Family, friends, colleagues and students remember Gervais as a charismatic humanist who communicated his lifelong love of film to generations of Loyola College and Concordia students.
Among them were Denys Arcand (a future Oscar winner), John Kent Harrison (who went on to make TV movies such as The Courageous Heart of Irena Sendler), and Kevin Tierney (producer of Bon Cop, Bad Cop).
"I think in some ways the goal of my entire professional career has been to get Marc's approval," Tierney wrote by email from Mexico City, where he's promoting his latest film, French Immersion.
"Maybe I don't have to worry about that anymore or maybe it's worse now knowing I can't."
Some of Gervais' students went on to become journalists, such as the CBC's Hana Gartner and The Gazette's Paul Cherry, who took two or three courses with him in the mid-1990s.
"He was humble about his credentials," said Cherry, now The Gazette's crime reporter. "I remember one day he mentioned in a very by-theway manner that he knew Jean-Luc Godard personally."
Born and raised in Sherbrooke, Que., Gervais was the second child of Sylvia Mullins and Superior Court Justice Césaire Gervais. He got the movie bug early: Though not yet the legal cinema-going age of 14, he used to tag along with his grandmother, Lily Mullins, on her outings to the theatre.
Gervais graduated from Loyola in 1950 with a bachelor of arts degree. In 1960 he got a master's of fine arts in drama at the Catholic University of America in Washington, D.C. He was ordained a Jesuit priest in 1963 and began his academic career at Loyola in 1967. In 1979 he received a doctorate in film esthetics from the Sorbonne.
Over the years - first at Loyola, then at Concordia after its founding in 1974 - he gave courses on Hollywood silents and musicals and Westerns, on German expressionist cinema and Italian neo-realism and the French New Wave, and on directors as varied as John Ford, Alfred Hitchcock and Quentin Tarantino.
In a course called Film Ideas, Gervais screened one film every week at the old Cinema V in Notre Dame de Grâce. He also opened up screenings to the public at Concordia's F.C. Smith Auditorium.
"His passion was for teaching - he loved to teach," said his long-time Concordia colleague Sheelah O'Neill, who runs the communications studies department.
In emails to her, some of his former students remembered their mentor as someone who, as Harrison put it, "ignited our passion and in most cases, changed the direction of our lives."
"Who can forget," Harrison wrote, "those moments when he would freeze a frame of Bergman or Rossellini on that rickety old 16-millimetre projector, hold his hands to heaven and without a word manage to engage our limbic brains with paragraphs of profundity?"
Gervais attended the annual Cannes Film Festival 39 times; defended Pasolini as a jury member at the 1968 Venice Film Festival and in his 1973 book about the controversial Italian filmmaker; became the go-to international Bergman expert in 1999 with his book Ingmar Bergman: Magician and Prophet; and worked as a consultant on such Catholic-themed films as Agnes of God, Black Robe and The Mission.
Gervais was also the founding director of the Loyola Institute for Studies in International Peace, a founding member of Concordia's Lonergan University College and commissioner with the Canadian Radio-television and Telecommunications Commission.
An award in his name - the $2,000 Marc Gervais Prize in Communications Studies - is given each year to a BA student graduating from Concordia.
In his spare time, Gervais was an avid tennis player and a big baseball and hockey fan, favouring - to the dismay of his Montreal acolytes - the Boston Bruins.
He struck an urbane figure in tweed jackets and ascots, looked a bit like French director François Truffaut and did funny impersonations of movie stars such as Cary Grant.
He lived most of his life on or just next to Loyola campus.
* * * 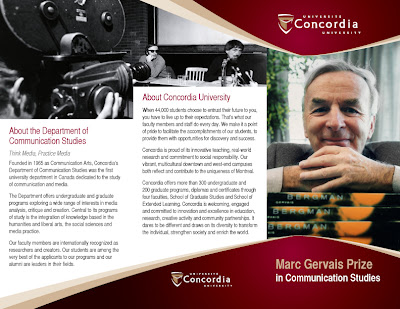 
PRAYER OVER THE PEOPLE 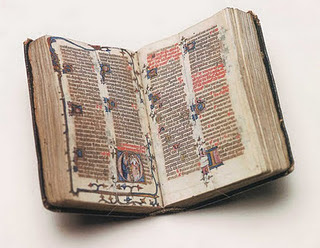 Be gracious to your people, Lord, we pray, that, as from day to day they reject what does not please you, they may be filled instead with delight at your commands. Through Christ our Lord.
Posted by Archbishop Terry at 6:53 AM