Today the Liturgy permits the Optional Memorial of St. Norbert. 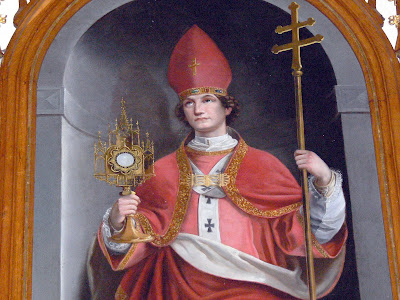 Born to the nobility, Norbert (c. 1080) was raised around the royal court and served as almoner for Emperor Henry V. In the court he developed a very worldly view, and took holy orders as a career move, joining the Benedictines at Siegburg.

A narrow escape from death led to a conversion experience, and he began taking his vows seriously. He tried to reform his order’s local house, then became a wandering preacher. He founded a community of Augustinian canons at Premontre, France; they became known as the Norbertines or Premonstratensians, and started a reform movement that swept through European monastic houses.

His founding of the Order was a monumental task: combating rampant heresies (particularly regarding the Blessed Sacrament), revitalizing many of the faithful who had grown indifferent and dissolute, plus effecting peace and reconciliation among enemies.

Norbert entertained no pretensions about his own ability to accomplish this multiple task. Even with the aid of a goodly number of men who joined his Order, he realized that nothing could be effectively done without God’s power. Finding this help especially in devotion to the Blessed Sacrament, he and his Norbertines praised God for success in converting heretics, reconciling numerous enemies and rebuilding faith in indifferent believers. Many of them lived in central houses during the week and served in parishes on weekends.

Reluctantly, Norbert became archbishop of Magdeburg in central Germany, a territory half pagan and half Christian. He reformed the clergy in his see, using force when necessary, and worked with Saint Bernard of Clairvaux and Saint Hugh of Grenoble to heal the schism caused by the death of Pope Honorius II. In this position he zealously and courageously continued his work for the Church until his death on June 6, 1134.


* * *
O God, who made the Bishop Saint Norbert a servant of your Church outstanding in his prayer and pastoral zeal, grant, we ask, that by the help of his intercession the flock of the faithful may always find shepherds after your own heart and be fed in the pastures of salvation. Through our Lord.
* * * * * *
Monday in the Seventh Week of Easter
May the power of the Holy Spirit come to us, we pray, O Lord and that we may keep your will faithfully in mind and express it in a devout way of life. Through our Lord.

On Saturday and Sunday, the Pope made a pastoral visit to Croatia, centered on the theme of The Family.

Dear Brothers and Sisters, with the motto "Together in Christ", I have come to join you in celebrating the First National Day of Croatian Catholic Families.
May this important event serve as an opportunity for proposing afresh the values of family life and the common good, for strengthening unity, renewing hope and leading people to communion with God, the foundation of fraternal sharing and social solidarity.
In anticipation, I sincerely thank all those who have helped with the preparation and organization of my visit. In view of the challenges confronting the Church and civil society today, I invoke upon this land and all its inhabitants the intercession and assistance of Blessed Alojzije Stepinac, the beloved and venerable Shepherd of your people. May he accompany the young generations as they strive to live by that charity which prompted the Lord Jesus Christ to give his life for all people.

May Saint Joseph, watchful guardian of the Redeemer and heavenly Patron of your Nation, together with the Virgin Mary, "Fidelissima Advocata Croatiae", obtain for you peace and salvation, today and always. Thank you! 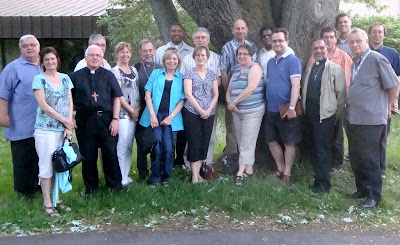 Last week, I spent several days at Villa St. Martin in Pierrefonds, Quebec, directing a retreat for Pastoral Workers for the English Sector of the Saint-Jean-Longueuil Diocese on Montreal's South Shore.
On the first afternoon and evening, recently-installed Bishop Lionel Gendron, pss participated in the spiritual exercises, presiding at the afternoon Eucharist, leading a biblical reflection and, before departure, posing for a photo (above).
Posted by Archbishop Terry at 6:24 AM