For our celebration of the Blessed Mother's Immaculate Conception: a prayer, a poem and a reflection: 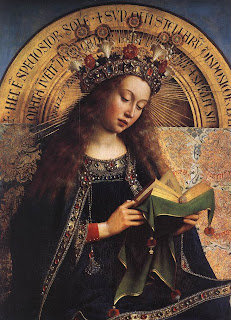 O God, who by the Immaculate Conception of the Blessed Virgin prepared a worthy dwelling for your Son, grant, we pray, that, as you preserved her from every stain by virtue of the Death of your Son, which you foresaw, so, through her intercession, we, too, may be cleansed and admitted to your presence. Through our Lord.
* * * * * *
Flos Carmeli,
Vitis florigera,
Splendor caeli,
Virgo puerpera
Singularis.
Mater mitis
Sed viri nescia
Carmelitis
Esto propitia
Stella maris.
Radix Iesse
Germinans flosculum
Nos ad esse
Tecum in saeculum
Patiaris.
Inter spinas
Quae crescis lilium
Serva puras
Mentes fragilium
Tutelaris.
Armatura
Fortis pugnantium
Furunt bella
Tende praesidium
Scapularis.
Per incerta
Prudens consilium
Per adversa
Iuge solatium
Largiaris.
Mater dulcis
Carmeli domina,
Plebem tuam
Reple laetitia
Qua bearis.
Paradisi
Clavis et ianua,
Fac nos duci
Quo, Mater, gloria
Coronaris. Amen.
English translation:
Flower of Carmel,
Tall vine blossom laden;
Splendor of heaven,
Childbearing yet maiden.
None equals thee.
Mother so tender,
Who no man didst know,
On Carmel's children
Thy favors bestow.
Star of the Sea.
Strong stem of Jesse,
Who bore one bright flower,
Be ever near us
And guard us each hour,
Who serve thee here.
Purest of lilies,
That flowers among thorns,
Bring help to the true heart
That in weakness turns
And trusts in thee.
Strongest of armor,
We trust in thy might:
Under thy mantle,
Hard press'd in the fight,
We call to thee.
Our way uncertain,
Surrounded by foes,
Unfailing counsel
You give to those
Who turn to thee.
O gentle Mother
Who in Carmel reigns,
Share with your servants
That gladness you gained
And now enjoy.
Hail, Gate of Heaven,
With glory now crowned,
Bring us to safety
Where thy Son is found,
True joy to see. Amen.
* * * * * *
Whose conception is it anyway?

There always seems to be a bit of confusion around this week’s Solemnity. Despite falling in the middle of Advent, December 8 is not a celebration of the conception of Jesus—which would have meant a remarkably brief pregnancy—but of Mary.
Still, even if we remember whose life it is we’re celebrating, that doesn’t clear up every mystery about the Immaculate Conception. I must confess that for most of my life even though I knew we had to go to church on December 8, I wasn’t exactly sure why. It had something to do with one of those Marian dogmas, I knew, but most Catholics tiptoe around those nowadays for fear of offending the Protestants. And even though I, being a somewhat contrarian lad, was prepared to pick Mary over the Protestants, I really had no idea why.

Even today, while I know a bit more about theology, I still have to admit to finding this particular Mystery particularly mysterious. Among the writing I’ve found shedding light on the subject is an excellent essay titled “The Immaculate Conception” by the British Thomist, Herbert McCabe, OP.

McCabe begins by noting that December 8 is not the feast of a doctrine but of a person, Mary, and the spectacular way God worked in her life. He then goes on to talk a bit about the doctrine’s history and its meaning.

Doing so requires some humility for a Thomist, since Aquinas himself denied the Immaculate Conception, as did a bevy of medieval theologians. It was the Franciscan Duns Scotus who resolved the conundrum that had perplexed Aquinas and the others: if Mary was conceived without sin, how can we say she was redeemed by Jesus? Scotus answered that an ounce of prevention is worth a pound of cure… or something like that. McCabe puts it rather more elegantly:

The highest act of Christ’s redeeming power would be not just to cure sin but to prevent it in the first place. Thus to be in this world and yet to be prevented from ever falling under the domination of the world is to be not less but more dependent on Christ our redeemer. Mary is more thoroughly redeemed than we are and has greater, not less, cause for gratitude to Christ than we have.

Though the doctrine itself is not stated in Scripture and would most likely never have been articulated as such by Mary herself, it arose, according to McCabe, out of a profound Christian instinct, the recognition of Mary as radically holy and the need to somehow praise this holiness. All our doctrines, McCabe argues, spring from this same instinct, the need to praise God, or in this case God’s working through Mary. Doctrine, he says rather nicely, is “nothing but an interpretation of our need to worship.”

As McCabe describes it there was something very democratic in the development of the doctrine of the Immaculate Conception, the fruit of popular devotion stubbornly growing despite the opposition of even the greatest theologians. Perhaps it’s appropriate, then, that Our Lady of the Immaculate Conception should have become the patroness of the United States, a populist patroness for a democratic people. McCabe describes the eventual acceptance of the doctrine by the Church as “a victory for the affective over neat rational systems… a very Franciscan thing.” (And here take note, dear reader, of Jesuits and Dominicans together in a humble nod to Duns Scotus and the Franciscans—a remarkable feast this is indeed!)

There is even more, though, to this instinct for popular Marian devotion. All of the Marian doctrines, so far as I can see, tell just as much about Jesus and the Church as they do about Mary herself. McCabe notes a certain appropriateness in celebrating this feast in Advent, despite the confusion over just whose conception it is we’re commemorating. This appropriateness is because the feast—and the doctrine—remind us that the appearance of Gabriel to Mary and the birth of Jesus that followed were not just accidental events in Mary’s life. It wasn’t as if Mary won the lottery and all of the sudden—golly!—became the Mother of God. As McCabe puts it, the Annunciation of the conception of Jesus “was the culmination of a coming of the Spirit in Mary that was from the beginning, from the roots of her existence.”

What does this mean for us? Well, just as Mary’s Assumption is the beginning of our resurrection, of the “resurrection of all who are taken up into Christ’s resurrection,” so too does the Immaculate Conception tell us something about our own redemption. Mary’s redemption comes from the depth of her being; it is not something external that just coincidentally starts when the angel shows up. Her radical holiness—her being “as holy as she could be said to be”—is not the negation of her being; it is her deepest self.

There is a hope here for all of us, a great lesson about the mystery of God’s love, God who redeems us without destroying us, God whose redeeming love reaches down to the depths of our being. As McCabe says,

What we celebrate on the feast of the Immaculate Conception is that Christ’s love for us brings us further than this. What he wants for us is not just that we should be forgiven sinners but that we should be as though sin had never been. Redemption for us will involve a rebirth from an immaculate conception. Our redemption will not just be the successful end of a journey, the triumphant culmination of the history of man, but in some utterly mysterious way we will be freed from our history, or our history will be taken up into some totally new pattern in which even our sins become part of our holiness. We will somehow be able to accept them as God accepts them. There will be no more sorrow for sin, no more remorse over the past, no more contrition; we will be radically and totally free…

Perhaps these reflections only add more mystery to this week’s Solemnity, but maybe it’s better that they do. For perhaps as we celebrate Mary’s conception this week, we are also celebrating the hope of our own conception, our own rebirth in the New Jerusalem, beyond the pain of sin, when even sin’s memory no longer has any power over us, when there shall be no more death or mourning, wailing or pain, when the old order has finally passed away…

*** (The essay referred to can be found in McCabe’s interesting collection of essays God Matters, Continuum).


--Anthony Lusvardi, SJ (on the blog: http://whosoeverdesires.wordpress.com/
Posted by Archbishop Terry at 6:26 AM