A beloved pastor and an extraordinary administrator will succeed Mgr Mario Paquette (of the Archdiocese of Montreal) as General Secretary of the Canadian Conference of Catholic Bishops.

Msgr Powers was born in Montreal and lived there his early years. After studies in business at Sir George William University (today part of Concordia University, Montreal), he first worked for a major Canadian company where he served as employment and personnel services manager, among other responsibilities, before entering the Ottawa major seminary at the beginning of the 1980s.

Ordained priest in 1986, Msgr Powers holds a bachelor’s degree in theology from Saint Paul University, Ottawa, and a licentiate in canon law from the Pontifical Gregorian University, Rome. 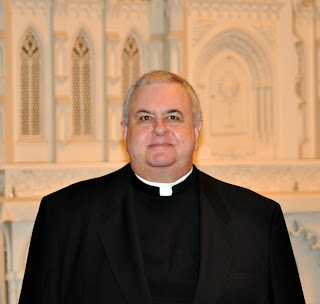 Msgr Powers has also served outside the Archdiocese of Ottawa, including as a member of the Insurance Management Board of the Ontario Assembly of Catholic Bishops, as well as president of the Canadian Canon Law Society, 2002 to 2004.

This is the statement I made in today's press release marking Msgr's appointment:

“The appointment of Msgr Powers as General Secretary of our national conference is a tribute to his administrative and pastoral skills. Although he will be greatly missed in our diocese during his time at the conference, Msgr Powers’ appointment is being done with my consent and in the interests of the Catholic Church in Canada.

"I know that there are very few priests in Canada who have the requisite competence and experience to undertake this important position. I know that Msgr Powers will fulfill the responsibilities of the office with his usual dedication and ability. He takes up this new challenge with the assurance of my prayers and with the best wishes of the Catholics of our archdiocese.

"As for the future pastoral leadership of our Cathedral, I can advise you that succession planning is well advanced. I expect to make an official announcement in coming weeks. As Msgr Powers new responsibilities do not take effect until February 1st of next year, I know that we will be able to count him for a period of transition and the initiation of his successor.”
Posted by Archbishop Terry at 7:08 PM