Arrival in Paray-le-Monial: the historical city of the Sacred Heart Apparitions and now the host of Emmanuel gatherings 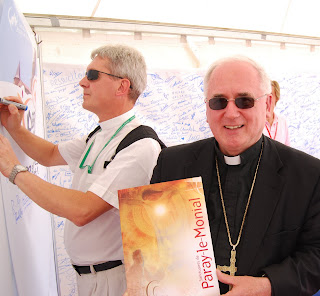 On Sunday, Frere Etienne drove me from Sept-Fons to Paray-le-Monial, a city I had often heard about in conjunction with the Apparitions of the Sacred Heart to a cloistered sister of the Visitation Monastery (cf. earlier link), now known as St. Margaret Mary Alocoque. With the assistance on her Jesuit spiritual director St. Claude La Colombiere who encouraged her to trust in the manifestations and to make them known.

In a future post, I will give a more extensive pictorial report on my visit, but meantime I note that some 30,000 visitors--many of them families--come to Paray for a period of 3-5 days for conferences to strengthen and encourage couples, families and Catholic life in general. The 12th century basilica, associated with the famous abbey of Cluny nearby, dedicated in the 20th century to the Sacred Heart, is no longer adequate to handle the large number of visitors and pilgrims attending, so they now make use of large tents (the largest of which can accommodate over 2000 for Mass).

There is a program to address the needs to enlarge the facilities by the year 2020 at the cost of about four million Euros. This summer, there is an effort being made to collect some 50,000 signatures supporting the renewal program and to enlist initial contributions. Naturally, after celebrating the midday Sunday Eucharist, I was invited to sign up for the cameras.
Posted by Archbishop Terry at 2:34 PM