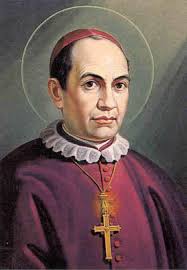 The founder of the Missionary Sons of the Immaculate Heart of Mary, Anthony Mary Claret died in the Cistercian monastery at Fontfroide in France on this date in 1870. He was canonized in 1950 and listed in the Roman Calendar in 1960. Anthony was born at Salent in the Diocese of Vich in Catalonia, Spain, in the year in which Napoleon invaded Spain. He was trained for manual labor, since his father was a weaver, but in 1829 he entered the seminary at Vich. Ordained to the priesthood in 1835, he was assigned as pastor in his home parish. Later he went to Rome to work for the Propagation of the Faith. He also entered the novitiate of the Jesuits but had to leave because of ill health, so he returned to Spain and was assigned as pastor of a parish. His apostolate consisted of rural preaching, conferences for the clergy and publications (he wrote more than 150 books). Because of his successful apostolate he aroused the animosity of some of the clergy and as a result he left Catalonia for the Canary Islands (1848). After a year he returned to Catalonia and resumed his preaching apostolate.

In 1849 Anthony gathered together five priests who formed the basis of the Missionary Sons of the Immaculate Heart of Mary (popularly known as Claretians). At the suggestion of the Queen of Spain, Isabella II, Anthony was named archbishop of Santiago, Cuba (1850). For the next seven years he made pastoral visitations, preached against the slavery of the Negroes, and regularized numerous marriages. As a result of his activity he was frequently threatened with death and on one occasion an attempt was actually made on his life. In 1857 he was recalled to Spain as confessor to the queen. In this way he was able to exert some influence in the naming of bishops, set up a center of ecclesiastical studies at the Escorial, and work towards the recognition of religious orders in Spain. In 1869 he was in Rome, preparing for the First Vatican Council. He followed Isabella II into exile and at the insistence of the Spanish ambassador, was placed under house arrest in the Cistercian monastery at FontFroide, where he died at the age of 63. His remains were ultimately returned to Vich.

Message And Relevance: In the new Opening Prayer of the Mass for this nineteenth-century apostle we pray: "Father, you endowed Anthony Claret with the strength of love and patience to preach the gospel to many nations." From his earliest years in the priesthood Anthony had a zealous missionary spirit that took him to Rome, the Canary Islands, and eventually to Cuba. Not only did he serve as rector of the seminary at the Escorial in Madrid, but he promoted Catholic publications and founded an academy of St. Michael for artists and literary persons. In Cuba he worked for the general uplifting of the population but did not succeed in founding a school of agriculture, as he had wished. He did, however, establish the Apostolic Institute of Mary Immaculate.

The patience of St. Anthony Claret was tested in the political upheavals of the nineteenth century, both in his native Spain and in Cuba. His efforts at reform stirred up a great deal of hostility. Therefore, we ask in the Opening Prayer that we may "work generously for God's kingdom and gain our brothers and sisters for Christ." In the Office of Readings, an excerpt from the writings of St. Anthony Mary Claret states: "The zealous man desires and achieves all great things and he labors strenuously so that God may always be better known, loved and served in this world and in the life to come, for this holy love is without end."

This great apostle, whose major work, The Right Way, reached millions of people, promoted fidelity to the gospel among all classes of people, and especially among the laity and religious. In this way he anticipated the teaching of the Second Vatican Council concerning the vocation of all the faithful to the perfection of charity. (Taken from "Saints of the Roman Calendar" by Enzo Lodi. Published by Alba House, Society of St. Paul, 2187 Victory Blvd., Staten Island, NY 10314.)

O God, who for the evangelization of peoples strengthened the Bishop Saint Anthony Mary Claret with admirable charity and long-suffering, grant, through his intercession, that, seeking the things that are yours, we may earnestly devote ourselves to winning our brothers and sisters for Christ. Who lives and reigns with you in the unity of the Holy Spirit, one God, for ever and ever.

Posted by Archbishop Terry at 12:24 AM