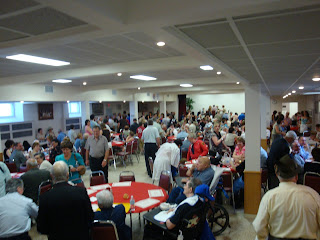 Yesterday after the Feast of St. Anthony: Mass and Procession with the Statue of St. Anthony through the streets surrounding the church (about 45 minutes, by which the crozier was starting to weigh heavily), and festive meal of pasta and the chance to meet many of the parishioners and to appreciate the service to them of pastor Father Paul McKeown and the other Servites of Mary and the Marian Sisterhoods, I drove to Montreal to have a barbecue in my brother and family's backyard.

******
Sister-in-law Renee Prendergast, daughter Caitlin (just graduated from McGill with great distinction and accepted into medical school there) and friend Tolly. A very pleasant evening, with summer weather finally here! It was wonderful to see how Sonia and John's children Clara and Paul are growing by leaps and bounds. Renee is excited that the homestead of 32 years has been sold; now she and Caitlin, the last child at home (but for how long?), are looking for new quarters by September 1st.

******
Pied-a-terre at the Jesuit Novitiate
The Pedro Arrupe House community of novices at 5611 Gatineau in the Cote-des-Neiges neighbourhood extended their hospitality to me overnight as I carried out a couple of devotions of filial piety: a visit to my parents' grave in Notre Dame-des-Neiges Cemetery (established 1855) and a mini-pilgrimage to St. Joseph's Oratory.

Though I have dropped in on this community over the years it's only the second time I've stayed at this residence. But I boast of being "from the neighbourhood" as St. Mary's Hospital where I and my other siblings were born is only a few minutes' walk away on Lacombe Avenue. French Canada Provincial Daniel Leblond came by to see the Novices off (they leave on Wednesday for Regis University, Denver for a month-long history of the Jesuits) and superior of the house, Bernard Carriere was celebrating his 73rd birthday.

Still, I was honoured to be asked to preside at the community Mass just before supper and to join in the birthday traditions: Instead of "Happy Birthday", Quebec has its own birthday song (found also in Ottawa and other French-speaking regions), "Mon cher Bernard, c'est a ton tour de te laisser parler d'amour", which was sung with great gusto! 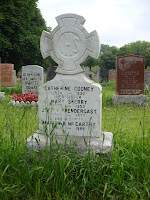 Walking Notre-Dame-des-Neiges Cemetery
Generally when I come to pray at my parents' resting place, I drive. So walking through the cemetery gave a whole other feel to the experience, a sense of its breadth, peace and vastness. There are at least a half-dozen large mausolea and new styles of grave markers with stylized glass monuments; there are a number of temple-like tombs being constructed. It's hard to keep up with innovations of funeral practices.

My family's plot is in one of the older sections (Troie) and in the very first row as my grand-aunt Catherine Cooney passed away in 1930; her sister, my grandmother Mary Skerry died in 1953 in her 79th year; my father John Vincent Prendergastpassed away in 1970 and my mother, who remarried (so is listed as Marion Bridget McCarthy), died in 1988. Relettering was done at that time, but it looks as if it needs to be touched up a bit.

Oddly--and perhaps due to the wet spring or some natural cycle--the cottonwoods in the Montreal region are abundantly shedding their white wispy moulting, balls of which blew steadily across the backyard yesterday evening during the barbecue; today the residue made it seem like a light snowfall had fallen on parts of the cemetery.

******
The legacy of Brother Andre
As a youngster, I often took visiting relatives on my guided tour to St. Joseph's Oratory, the largest shine to the Foster Father of Jesus and Spouse of the Blessed Mother in the world (it was recently designated a basilica but I'll wager that title will not catch on).

Over the years, the Oratory, directed by the Congregation of the Holy Cross, continues to be upgraded and ameliorated for the more than two million pilgrims and tourists who come annually to pray and rest and be uplifted. There are new, faster elevators and on level 4, there is a display about Brother Andre Bessett's life (that reflects what used to be in the small chapel) and here his heart is displayed.

[The heart was once located near his tomb on the first floor outside the crypt church, stolen by miscreants and held for ransom, but no one would pay up and finally the perpetrators let it be known it was in a locker in the main Metro (subway) station.]

We are invited to pray that the "Miracle Worker of Mount Royal" will soon be canonized.

The large upper church continues to be developed and there are new pews in about two-thirds of the space, with the grey folding chairs continuing to fill the rest. I was disappointed that there aren't kneelers in these pews, but someone said they came from Protestant churches that had closed. 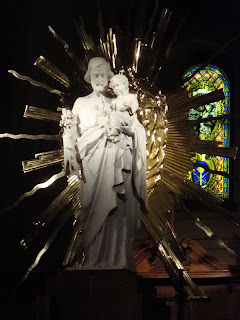 The Crypt Church is still, to me, the most peaceful and awesome site in the Oratory complex. The statue of St. Joseph with the Child Jesus above the altar is spectacular, yet gentle in tone. So too is the large crucifix before which pilgrims pray while touching the feet of their Crucified Lord; like the feet of St. Peter in Rome, the toes are worn from human touches.

On this brief pilgrimage, I gave thanks to the Lord for graces spiritual and material received from God's provident hands at the intercession of St. Joseph, Patron of the Universal Church and of Canada.

******
There is a new logo on a banner in the sanctuary which says, "C'est une fois qu'un portier a bati pour un charpentier" (This time a door-keeper did the building for a carpenter.) St. Joseph and Brother Andre are closely bound in the minds and hearts of Montrealers and those who come to pray and unburden themselves at "the Oratory".
Posted by Archbishop Terry at 11:10 PM