Solemnity of the Sacred Heart Begins the Year of the Priesthood; Quo Vadis Vocation Meeting; Last Confirmations of the Pastoral Year 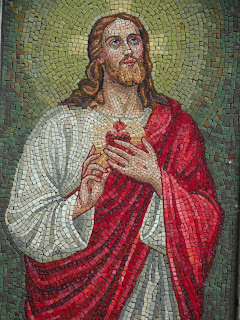 POPE BENEDICT LINKS HEART OF CHRIST, HEART OF THE PRIEST
In inaugurating the Year of the Priest that runs from this years’s Solemnity of the Sacred Heart (June 19, 2009) until the same feast next year (June 11, 2010), Pope Benedict closely aligns the sentiments of the Heart of Jesus, pierced for our sins out love, to the heart of the priesthood. Some of these connections are bolded below in the opening paragraphs of the Holy Father’s letter to the world’s priests. Further passages will be noted in coming days.

Dear Brother Priests,
On the forthcoming Solemnity of the Most Sacred Heart of Jesus, Friday 19 June 2009 – a day traditionally devoted to prayer for the sanctification of the clergy –, I have decided to inaugurate a “Year for Priests” in celebration of the 150th anniversary of the “dies natalis” of John Mary Vianney, the patron saint of parish priests worldwide. 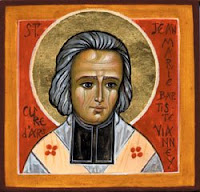 This Year, meant to deepen the commitment of all priests to interior renewal for the sake of a more forceful and incisive witness to the Gospel in today’s world, will conclude on the same Solemnity in 2010. "The priesthood is the love of the heart of Jesus”, the saintly Curé of Ars would often say.

This touching expression makes us reflect, first of all, with heartfelt gratitude on the immense gift which priests represent, not only for the Church, but also for humanity itself. I think of all those priests who quietly present Christ’s words and actions each day to the faithful and to the whole world, striving to be one with the Lord in their thoughts and their will, their sentiments and their style of life. How can I not pay tribute to their apostolic labours, their tireless and hidden service, their universal charity? And how can I not praise the courageous fidelity of so many priests who, even amid difficulties and incomprehension, remain faithful to their vocation as “friends of Christ”, whom he has called by name, chosen and sent?

I still treasure the memory of the first parish priest at whose side I exercised my ministry as a young priest: he left me an example of unreserved devotion to his pastoral duties, even to meeting death in the act of bringing viaticum to a gravely ill person. I also recall the countless confreres whom I have met and continue to meet, not least in my pastoral visits to different countries: men generously dedicated to the daily exercise of their priestly ministry.

Yet the expression of Saint John Mary also makes us think of Christ’s pierced Heart and the crown of thorns which surrounds it. I am also led to think, therefore, of the countless situations of suffering endured by many priests, either because they themselves share in the manifold human experience of pain or because they encounter misunderstanding from the very persons to whom they minister. How can we not also think of all those priests who are offended in their dignity, obstructed in their mission and persecuted, even at times to offering the supreme testimony of their own blood?

******
"Quo Vadis" Meets at St. Theresa's Church
Quo Vadis is the name of the monthly Third Friday meeting of men interested in discerning a vocation to the priesthood. As I already had a commitment at the Parish of St. Michael's, Corkery and St. Peter Celestine, Pakenham, the English Pastoral Office's Director of Youth, Ted Hurley helped me prepare a short video presentation thanking those open to searching out God's will in their regard and encouraging them as they struggle with saying "yes" to such a call when they discover that God wants them to serve His People in this wonderful ministry.

I am grateful to Father Tim Mccauley, our Director of Vocations for his strong leadership in holding a festive get-together this evening. The usual format is a period of prayer in common (often the Liturgy of the Hours), a testimony by one of the priests of the Archdiocese on his discernment of Christ's call (today Msgr. Kevin Beach, Vicar General) and a simple meal.

Men interested in discerning a call to the priesthood may contact Father Tim, who is pastor of Our Lady of the Miraculous Medal Parish in Russell by email [tmccauley@archottawa.ca] or by requesting to see him on Tuesdays at the Diocesan Centre (613-738-5025).

******
Completion of Confirmations for 2008-2009 Pastoral Year
Last night I celebrated the Sacrament of Confirmation for 16 youth at Paroisse St-Jean Baptiste, the parish directed by the Dominican Fathers; it is adjacent to Dominican University College on Empress Avenue. This evening I will confirm a small group in Pakenham, while tomorrow I will celebrate with youth from the Croatian Parish of St. Leopold Mandic in the western section of Ottawa.
Posted by Archbishop Terry at 7:46 AM