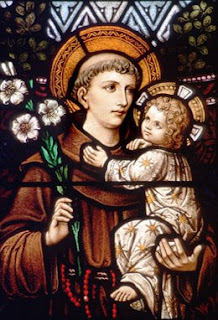 "The saints are like the stars. In his providence Christ conceals them in a hidden place that they may not shine before others when they might wish to do so. Yet they are always ready to exchange the quiet of contemplation for the works of mercy as soon as they perceive in their heart the invitation of Christ" (from the sermon notes of St. Anthony).

Tomorrow, I will visit the Parish of St. Anthony directed by the Servite Fathers (Pastor is Father Paul McKeown, O.S.M.), for the celebration of the Feast of St. Anthony, whose extent ranges into the neighbouring streets: and the road closures on account of the feast will make for total chaos as half of Preston Street is already being dug up for the replacement of sewers, etc, to the chagrin of restauranters and other small businesses that are suffering from such disruptions for the second year running!

******
This afternoon as I was dozing over The Saturday Citizen, enjoying life on the patio outside my quarters, I was told that there were "seminarians" come to visit me. Well, the term Jesuits use for beginners is novices and three of them from the Montreal Novitiate (Edmund Lo, John O'Brien and Santiago Rodriguez) had dropped by for refreshments after attending the funeral in Gatineau of the younger sister of their Superior, Pere Bernard Carriere.

We were able to get caught up on some of our news and plans for the future (for example, they will be going to Regis University, Denver, CO for a month-long program on the history of the Society of Jesus on June 18), something that I hope to learn more when I visit them on their home turf.

Meeting young people like these men on fire with love for the Lord and zeal for his Kingdom always edifies me, reminding me too of the energy I had "way back when", almost 48 years ago when I left home in Montreal to enter the noviceship, then located at Ignatius College, Guelph, ON.

******
Catechesis for Adults
This afternoon following an anticipated Sunday Eucharist to mark the Solemnity of the Body and Blood of Christ (Corpus Christi), we held a brief ceremony, presided by Father Mark Slatter, Director of Adult Faith Formation, to honour those from the English sector of the Archdiocese who have successfully completed a three-year (180-hours) of adult faith formation courses, programs and events with a diploma to this effect; others who had engaged in a significant number of these exercises were awarded a certificate of participation.

After three participants shared statements of what the program meant to them, Ms. Carol Kuchmozka, who had directed the program until last year spoke about the importance of addressing adult modes of learning, including that of one's faith. She began her remarks by harking back to Pope John Paul II's first post-synodal exhortation (October 16, 1979, the first anniversary of his election) Catechesi Tradendae, which includes adult Christian learners among those who are to be catechized (a step post-evangelization) in their knowledge of Christ, the Church and all that flows therefrom:

To continue the series of receivers of catechesis, I cannot fail to emphasize now one of the most constant concerns of the synod fathers, a concern imposed with vigor and urgency by present experiences throughout the world: I am referring to the central problem of the catechesis of adults.

This is the principal form of catechesis, because it is addressed to persons who have the greatest responsibilities and the capacity to live the Christian message in its fully developed form.

The Christian community cannot carry out a permanent catechesis without the direct and skilled participation of adults, whether as receivers or as promoters of catechetical activity.

The world, in which the young are called to live and to give witness to the faith which catechesis seeks to deepen and strengthen, is governed by adults. The faith of these adults too should continually be enlightened, stimulated and renewed, so that it may pervade the temporal realities in their charge.

Thus, for catechesis to be effective, it must be permanent, and it would be quite useless if it stopped short at the threshold of maturity, since catechesis, admittedly under another form, proves no less necessary for adults. [#43]
Posted by Archbishop Terry at 12:00 AM