In 1929 Catholics in the Lebreton area petitioned Archbishop Forbes for a new parish that would serve their area, but it was only in 1938 that the Parish of Our Lady of Perpetual Help was established.

A key feature of the parish's life were the weekly devotions in honour of OLPH on Wednesday, sometimes up to seven times that day and with the devotions broadcast for a time on CFRA.

Demographics transformed the location close to Chinatown into an area where few Catholics resided as many of the original faithful moved to other areas of Greater Ottawa. Several attempts were made to continue the parish's ministry or give it another direction, but eventually the church was closed and later sold to the Orthodox Church in America; it has become the Archdiocese of Canada's Annunciation Cathedral.

The OLPH devotions were transferred to St. Patrick's Basilica, where the annual celebration of the Feast is held on a Wednesday near the official calendar feast day of June 27. And so, this afternoon at the regular afternoon Mass time of 4:30, I presided at a 71st annual celebration in honour of Our Lady of Perpetual Help: a concelebrated Mass with devotional prayers before and after the Eucharist.

Some three hundred of the faithful were present, singing passionately the traditional Marian hymns and taking part in the traditional prayers of intercession. Afterwards, there was reception in the Scavi area of the basilica's basement.

Popular devotions of this kind do not draw crowds as in the past, but there is still room for such prayers which profoundly touch the lives of those who take part. 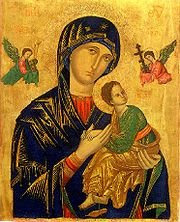 Our Mother of Perpetual Help is a title given to the Blessed Virgin Mary, associated with a Byzantine icon of the same name, said to be 13th or 14th century, but perhaps 15th century. The icon has been in Rome since at least the late 15th century.

In the Eastern Orthodox Church this iconography is known as the Theotokos [God-bearer] of the Passion. An image very popular among Catholics, it has been much copied and reproduced, with reproductions sometimes displayed in homes or elsewhere. A treasured image of OLPH was prominently displayed in the sanctuary at St. Patrick's.

Today, as from earliest times, Catholics continue to ask the Blessed Virgin to intercede on their behalf with Christ, her Son.
Posted by Archbishop Terry at 10:16 PM