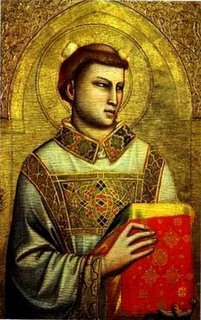 Today is a special day for Permanent Deacons the world over. It is the 42nd anniversary of Pope Paul VI’s Motu Proprio SACRUM DIACONATUS ORDINEM, subtitled "General Norms for Restoring the Permanent Diaconate in the Latin Church."

Some excerpts from that text follow, along with photos taken at the recent ordination of three Permanent Deacons for the Archdiocese of Ottawa: James Kubina, William Read and Louis Seward. The icon is a representation of St. Stephen, deacon and protomartyr (Acts 6:1-6; 6:8-8:1).

Beginning already in the early days of the Apostles, the Catholic Church has held in great veneration the sacred order of the diaconate [Sacrum Diaconatus Ordinem], as the Apostle of the Gentiles himself bears witness. He expressly sends his greeting to the deacons together with the bishops and instructs Timothy[1] which virtues and qualities are to be sought in them in order that they may be regarded as worthy of their ministry.

Furthermore, the Second Ecumenical Vatican Council following this very ancient tradition, made honorable mention of the diaconate in the Constitution which begins with the words "Lumen Gentium" where, after concerning itself with the bishops and the priests, it praised also the third rank of sacred orders, explaining its dignity and enumerating its functions…. 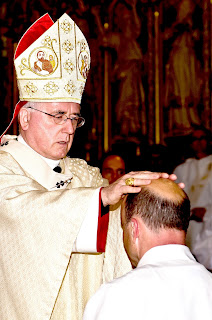 Although some functions of the deacons, especially in missionary countries, are in fact accustomed to be entrusted to lay men it is nevertheless "beneficial that those . . . who perform a truly diaconal ministry be strengthened by the imposition of hands, a tradition going back to the Apostles, and be more closely joined to the altar so that they may more effectively carry out their ministry through the sacramental grace of the diaconate."

Certainly in this way the special nature of this order will be shown most clearly. It is not to be considered as a mere step towards the priesthood, but it is so adorned with its own indelible character and its own special grace so that those who are called to it "can permanently serve the mysteries of Christ and the Church." …
According to [Lumen Gentium,] the above-mentioned Constitution of the Second Vatican Council it pertains to the deacon, to the extent that he has been authorized by the local Ordinary to attend such functions:


1) To assist the bishop and the priest during liturgical actions in all things which the rituals of the different orders assign to him;


2) To administer baptism solemnly and to supply the ceremonies which may have been omitted when conferring it on children or adults;

3) To reserve the Eucharist and to distribute it to himself and to others, to bring it as a Viaticum to the dying and to impart to the people benediction with the Blessed Sacrament with the sacred ciborium;

4) In the absence of a priest, to assist at and to bless marriages in the name of the Church by delegation from the bishop or pastor observing the rest of the requirements which are in the Code of Canon Law with Canon 1098 remaining firm and where what is said in regard to the priest is also to be understood in regard to the deacon;

5) To administer sacramentals and to officiate at funeral and burial services;

6) To read the sacred books of Scripture to the faithful and to instruct and exhort the people; 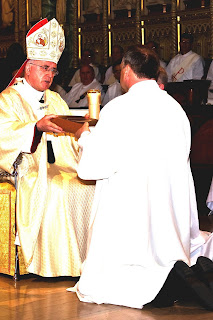 7) To preside at the worship and prayers of the people when a priest is not present;

8) To direct the liturgy of the word, particularly in the absence of a priest;

9) To carry out, in the name of the hierarchy, the duties of charity and of administration as well as works of social assistance.

10) To guide legitimately, in the name of the parish priest and of the bishop, remote Christian communities; 11) To promote and sustain the apostolic activities of laymen.

All these functions must be carried out in perfect communion with the bishop and with his presbytery, that is to say, under the authority of the bishop and of the priest who are in charge of the care of souls in that place.
Posted by Archbishop Terry at 3:59 PM