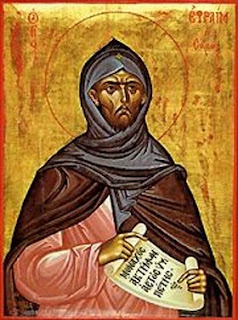 In our own day, we are striving to address matters of important to the Church in our country at this juncture in history what the saint of the day did in his.

Saint Ephrem, "the Lyre of the Holy Spirit"
The liturgy gives us a model for addressing the concerns of our day as St. Ephrem did in his time (306?-373). Poet, teacher, orator and defender of the faith, Ephrem is the only Syrian recognized as a doctor of the Church. He took upon himself the special task of opposing the many false doctrines rampant at his time, always remaining a true and forceful defender of the Catholic Church.

On November 28, 2007, Pope Benedict XVI spoke about Ephrem at a weekly Wednesday audience: “He was the most important representative of Syriac Christianity, and succeeded in a unique way to reconcile the vocation of the theologian with that of the poet. He was brought up with James, bishop of Nisibis (303-338), and with him he founded the theological school of his town. Once ordained a deacon, Ephrem completely immersed himself in the life of the local Christian community until 363, the year in which Nisibis fell under Persian rule.

In speaking of Ephrem, the Holy Father continued in the tradition of his namesake predecessor: In an encyclical letter (Principi Apostolorum Petro), Pope Benedict XV on October 5, 1920 declared the holy deacon St. Ephrem, “the lyre of the Holy Spirit” a Doctor of the Church.

“In his youth Ephrem, as he bewails in his little book of confessions, was languid and remiss in resisting the temptations by which that age is usually troubled. He was hot tempered, easily angered, quarrelsome, and unrestrained in mind and language. But while in prison on a false charge, he began to despise human things and the empty joys of this world.

Therefore, as soon as he was exonerated, Ephrem at once put on the habit of a monk and ever after devoted himself completely to the exercises of piety and to the study of the Sacred Scriptures. James, the bishop of Nisibis, one of the three hundred eighteen Fathers of the Nicene Council, who had established a renowned school of exegesis in the episcopal city, became his patron.

He not only fulfilled James' expectations with his diligent and sharp-witted commentaries on the Bible, but even surpassed them. As a result, he soon became the greatest of all commentators of that school, earning the title Doctor of the Syrians.”

After his move to Edessa, he established in his home a library and an academy. “Ephrem never left his solitude in Edessa except on fixed days to preach. In his preaching, he defended the dogmas of faith from swelling heresies. If, conscious of his lowliness, he did not dare to rise to the priesthood, he nevertheless showed himself a most perfect imitator of St. Stephen in the lower rank of the diaconate.

"He devoted all of his time to teaching Scripture, to preaching, and to instructing the nuns in sacred psalmody. Daily he wrote commentaries on the Bible to illustrate the orthodox faith; he came to the aid of his fellow citizens, especially the poor and the stricken. What he sought to teach others, he first did absolutely and perfectly. In this way, he could serve as the example which Ignatius Theophorus proposes to the deacons when he calls them ‘charges of Christ’ and asserts that they express ‘the mystery of faith in a pure conscience’”.

What was his method and purpose? He was a Christian songster, apologist and melodist: “Ephrem lived among people whose nature was attracted by the sweetness of poetry and music.

The heretics of the second century after Christ used these same allurements to skillfully disseminate their errors. Therefore Ephrem, like youthful David killing the giant Goliath with his own sword, opposed art with art and clothed Catholic doctrine in melody and rhythm. These he diligently taught to boys and girls, so that eventually all the people learned them. In this fashion he not only renewed the education of the faithful in Christian doctrine and supported their piety with the spirit of the sacred liturgy, but also happily kept creeping heresy at bay.”

As with all orthodox Christians, he loved the Mother of God and sang particularly well of her: “The lyre of the Holy Spirit" never sounded sweeter than when he was asked to sing the praises of Mary or to celebrate her perfect virginity, her divine maternity, or her full patronage of mercy toward man.”

"The shepherd came to her
and the Lamb is born, who humbly cries.
Because Mary's womb
has reversed the roles:
The one who created all things
wasn't born rich, but poor.

"The Almighty came to her (Mary),
but he came humbly.
Splendor came to her,
but dressed in humble clothes.
The One who gives us all things
met hunger.

"The One who gives water to everyone
met thirst.
Naked and unclothed he came from her,
he who dresses all things (with beauty)."
(Hymn « De Nativitate » 11, 6-8).

Ephrem’s testament recalls a childhood dream and its fulfillment in his life and work: "There grew a vine-shoot on my tongue: and increased and reached unto heaven, And it yielded fruit without measure: leaves likewise without number. It spread, it stretched wide, it bore fruit: all creation drew near, and the more they were that gathered: the more its clusters abounded. These clusters were the Homilies; and these leaves the Hymns. God was the giver of them: glory to Him for His grace! For He gave to me of His good pleasure: from the storehouse of His treasures."

******
Between the Commission meeting and dinner, I attended a farewell gathering to thank Pere Doris Laplante CSsR for his service as Chancellor, Judicial Vicar, Vicar Religious and overall contributor to the faith education and pastoral life of the Archdiocese. After close to a decade in Ottawa studying and ministering, the amazing cylcing canonist is moving closer to home near Quebec City, having accepted to serve in the Chancery and Tribunal of the Diocese of Sainte Anne-de-la-Pocatiere on the south shore of the mighty St. Lawrence River. "Au revoir et bonne chance!"
Posted by Archbishop Terry at 8:11 AM