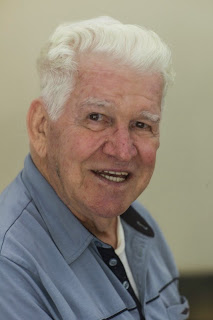 Father John Stephen (Jack) Doyle died early on May 25, 2015 at René Goupil House, Pickering. He was in his 84th year and in his 60th year of religious life.

Jack Doyle was born at Brewer’s Mills, Ontario and entered the Society at Guelph on September 7, 1955. He pronounced first vows on September 8, 1957, then devoted two years to college studies in Guelph and further studies in philosophy at Mount St. Michael’s in Spokane, Washington. In 1962, he began regency at Regiopolis High School, Kingston. Theological studies followed at Regis College, Willowdale, Ontario and priestly ordination on June 3, 1967.

Father Doyle applied for the missions in Zambia and, beginning in 1968 spent the next 40 years in various locales, as director of a school in the remote area of Katondwe, for example. He was a pastor of several parishes, Assistant to the Provincial for five years, minister of various communities, and chaplain for ten years at University Teaching Hospital, the largest in Zambia with 1,655 beds.

Fr. Jack could bring out the best in people and was very comfortable with simple people. By admitting what he could not do, he elicited amazing cooperation from many. People would come to him and ask, “How can we help?” He returned several times to Canada: in 1972 for his final year of Jesuit training before Final Vows, called Tertianship, and for other sabbatical periods in Toronto.

Fr. Doyle bade farewell to Zambia in 2008, moving to Winnipeg to serve as Associate pastor at St. Ignatius Parish. In 2012 his health took a turn for the worse with a diagnosis of cancer. He took medical treatment in Kingston and in 2013 moved to the Jesuit Infirmary at Pickering for recuperation and ongoing treatment.

Until the last weeks of his life, Fr. Jack took daily walks outside, no matter what the weather. He celebrated weekly Masses both at René Goupil House and La Storta Residence. All of his homilies were well prepared and even at Pickering he never failed to print out his homily before each of his public Masses.

Of a pleasant and agreeable personality, Fr. Jack had no trouble making friends. He enjoyed being a pastor of rather large areas in Zambia. An avid fan of the internet, he kept in regular touch with Zambia and was up to date on the latest Jesuit and ecclesial announcements.

The Wake for Father Doyle will take place Tuesday evening, May 26 from 7-9 PM (with Prayers at 8 o’clock) at Ignatius Chapel of Manresa Retreat House, where the Funeral Mass will take place on Wednesday, May 27 at 11 o’clock (followed by a reception).

Burial will take place Wednesday at 2:30 at the Jesuit Cemetery, Guelph.


Requiescat in pace.
Posted by Archbishop Terry at 4:57 PM