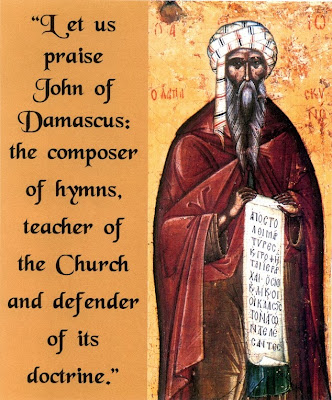 This article from Saint of the Week at the Catholic Herald  telling us of today's optional memorial of St. John of Damascus, doctor of the Church, reminds us to keep the people of Syria, particularly Christians there, in our thoughts and prayers.  Let us continue to pray for peace in this war-torn land:

Iohannes Damascenus, or Yuḥannā Al Demashqi, also known as the “golden speaker” (literally “streaming with a gold”) for his ability to write and argue, was a Syrian monk who made a crucial difference to the Church and without whom Eastern Orthodoxy might not have retained its attachment and beauty.

Born in 675 or 676 in the Syrian capital into a prominent family, the Mansour, his grandfather Mansur Bin Sargun had surrended the city to the Muslims, but Damascus continued to be effectively run by a Christian civil service for hundreds of years, and John’s father Sergius served the caliphs, as did John after him. One of the great polymaths of the age, John had particular skill in law, theology and music, writing hymns that are still used in Orthodox liturgy. Revered across Christendom, the Orthodox Church refers to him as “the last of the Fathers” while the Catholic Church regards him as a Doctor of the Church, in particular, the Doctor of the Assumption because of his writings on that subject.

Syria had been the land where followers of Jesus first called themselves Christian and it was steeped in the Hellenistic culture in which the faith developed.

His learned father had insisted that John “learn not only the books of the Muslims, but those of the Greeks as well” and he grew up at least partly speaking Greek, and earning a Hellenic education. His tutor may have been Cosmas, a Sicilian Greek kidnapped by Arabs, although the biography is sketchy, and Cosmas probably also taught John’s childhood friend, St Cosmas of Maiuma,

John grew up to become a major opponent of the iconoclasts, then gaining ground in the court of Constantinople. In 726 Emperor Leo III ordered that images should not be venerated, against the wishes of the patriarch, and St John undertook a defence of holy images, gaining a reputation as a writer and influencing the Second Council of Nicaea.

John left Damascus in his 40s to become a monk, partly due to the increasingly Islamic atmosphere of Damascus, and he died in Palestine on December 4, 749, at the Mar Saba monastery outside Jerusalem.

He was declared a Doctor of the Church by Leo XIII in 1883.

On Friday, December 6 at 7 pm, the Archdiocese of Ottawa and the Ottawa Family Cinema will be showing the new motion picture Mary of Nazareth at the Ottawa Family Cinema, 710 Broadview Avenue, Ottawa. This true story uses a historic backdrop to tell the story of Saint Mary – the mother of Jesus; one of the Church’s most beloved and well-known saints.
Its message is as timely today as when Jesus was born. It is the story of one who’s simple and humble “yes” led to the transformation of the world, who’s heart was pierced as with a sword and who was welcomed into heaven.
For tickets – $8 in advance or $10 at the door, or $6 in advance for Ottawa Family Cinema members or $8 at the door for members – visit www.familycinema.ca or call the cinema at 613-722-8218. For more information, contact Ted Hurley at thurley@archottawa.ca or call him at the Diocesan Centre at 613-738-5025, ext. 231.
Posted by Archbishop Terry at 10:01 AM