To Honour a Saintly Brother 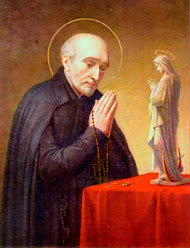 While much attention is given to Hallowe'en today, in the Jesuit Order we honour the feast of St. Alphonsus Rodriguez who foreshadowed the life of our St. Andre Bessette in his role as door-keeper.  He had a marvellous influence on many who came and went at the Jesuit College, including on St. Peter Claver, whom he helped discern a call to serve the slaves in Colombia.  Here is the Jesuit poet Gerard Manley Hopkins's tribute to him:

In Honour of St. Alphonsus Rodriguez, Lay Brother of the Society of Jesus

Honour is flashed off exploit, so we say;

And those strokes once that gashed flesh or galled shield

Should tongue that time now, trumpet now that field,

And, on the fighter, forge his glorious day.

On Christ they do and on the martyr may;

But be the war within, the brand we wield

Unseen, the heroic breast not outward-steeled,

Earth hears no hurtle then from fiercest fray.

Yet God (that hews mountain and continent,

Earth, all, out; who, with trickling increment,

Could crowd career with conquest while there went

Those years and years by of world without event

That in Majorca Alfonso watched the door.

Posted by Archbishop Terry at 5:20 AM