At the opening and closing of his Apostolic Letter Novo Millennio Ineunte (“Beginning the New Millennium”), Pope John Paul II quoted, in Latin, Jesus' invitation to Peter in today's gospel, “put out into the deep” (Luke 5.4).

“Duc in altum!” These words ring out for us today, and they invite us to remember the past with gratitude, to live the present with enthusiasm and to look forward with confidence: “Jesus Christ is the same yesterday and today and forever” (Hebrews 13.8 [NMI, #1]).

After reviewing the graces of the Great Jubilee Year 2000 and describing the challenges ahead, the Holy Father reiterated Christ's command:

“Duc in altum! Let us go forward in hope! A new millennium is opening before the Church like a vast ocean upon which we shall venture, relying on the help of Christ. The Son of God, who became incarnate two thousand years ago out of love for humanity, is at work even today: we need discerning eyes to see this and, above all, a generous heart to become the instruments of His work” (NMI, #58).

The context of Jesus' command to Peter to head for deep water and “let down your nets for a catch” was his preaching to the crowds from Peter's boat on Lake Gennesaret, also known as the Sea of Galilee. “The crowd pressed in on him to hear the Word of God”.

After a night of fruitless fishing, Simon Peter sensed a power present in Jesus' teaching and so responded to his invitation with a hint of trust, “if You say so [literally “at your word”], I will let down the nets”.

The ensuing catch, which threatened to sink his boat and that of his fishing partners, occasioned a powerful reaction in Peter. “Go away from me, Lord, for I am a sinful man!”

It was a response not unlike Isaiah's during his encounter with God in the Temple, “Woe is me! I am lost, for I am a man of unclean lips, and I live among a people of unclean lips; yet my eyes have seen the King, the Lord of hosts!”

Still, recognition of one's unworthiness before the divine activity—as it breaks into ordinary life—leads to purification and inner renewal. God sent a seraph to purify Isaiah's lips, taking away his sin and guilt. Now Isaiah could say when the voice of the Lord asked who might be sent to the people, “Here am I; send me!”

Jesus prompted a similar interior transformation in Simon Peter. “Do not be afraid; from now on you will be catching people”.

This call did not belong to Peter alone; it was shared with his companions: “When they had brought their boats to shore, they left everything and followed him”.

The symbolism of Jesus' declaration that the apostles would henceforth be “catching people” implies taking them out of the sea, a place that symbolized, at that time, control by the evil and destructive powers lurking underwater.

So the net in which fish (and, symbolically, people) are caught represents their transfer to another realm, in this case God's Kingdom. Henceforth, disciples share in Jesus' liberating activity, rescuing men, women and children from the power of death and introducing them to a new, Spirit-inspired assembly, the church.

The church needs men and women to continue the legacy of the apostolic era by serving as priests and religious. Today's church faces a great challenge, to help younger generations to know that Christ is at work in their lives. Once having shared this experience of intimacy with Christ, they can be open to heeding a ministerial vocation: “Come follow me, says the Lord, and I will make you fishers of my people” (alleluia verse).

Paul's magisterial teaching on the resurrection offered to the Corinthians makes clear that the Church's life and activity are grounded in the paschal mystery foretold by God (“in accordance with the scriptures”).

Christ's death, burial, resurrection and appearances to the apostles (including Paul, “as to one untimely born”) help clarify Christian belief and moral conduct when they begin to drift. Only because Christ Jesus is risen from the dead can the Church hear him say again today, “put out into the deep”. 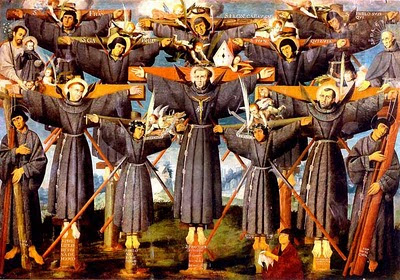 Paul Miki, a Japanese Jesuit, and his twenty-five companions were martyred in Nagasaki, Japan.

They were the first martyrs of East Asia to be canonized. They were killed simultaneouly by being raised on crosses and then stabbed with spears.

Their executioners were astounded upon seeing their joy at being associated to the Passion of Christ.
* * *

O God, strength of all the Saints, who through the Cross were pleased to call the Martyrs Saint Paul Miki and companions to life, grant, we pray, that by their intercession we may hold with courage even until death to the faith that we profess. Through our Lord Jesus Christ, your Son, who lives and reigns with you in the unity of the Holy Spirit, one God, for ever and ever.
Posted by Archbishop Terry at 6:28 AM