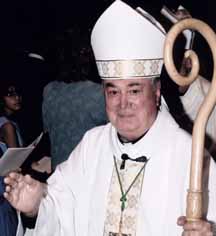 Most Reverend Arthé Guimond, Emeritus Archbishop of Grouard-McLennan, passed away in Edmonton last week at the age of 81.

His funeral Mass will be celebrated at St. Joseph Basilica, Edmonton, today, February 15, at 10:30 am, with the Most Reverend Richard Smith, Archbishop of Edmonton and President of the CCCB, presiding.

A memorial Mass will be celebrated at St. John the Baptist Cathedral, McLennan, on Friday, February 22, at 7:30 pm, with Archbishop Gerard Pettipas, C.Ss.R., presiding.

I did not know Archbishop Guimond very well, though I always found him a gentle personality whenever we met at the annual Plenary Assembly of the Canadian Conference of Catholic Bishops, first when he was the diocesan administrator of Grouard-McLennan, and then as the eighth bishop of Grouard and fourth archbishop of the Peace River archdiocese of Grouard-McLennan.

Glen Argan did a story on his episcopal ministry as an "unfinished sympathy" because of the illness that cut short even what would have been a short episcopal service (in the January 29, 2007 edition of the Western Catholic Reporter) reprinted below:

He has slowed down a lot since he became archbishop of Grouard-McLennan in August 2000. But the mind of Archbishop Arthé Guimond is as sharp as ever.

Guimond now lives at Foyer Lacombe, the Oblate retirement home in St. Albert, and gets around in a wheelchair. He was felled by a ruptured abdominal aneurysm in August 2005 and a diocesan administrator was appointed the following month.

"I thank God everyday that I'm still alive," Guimond said in an interview.

"Right now I've taken the attitude that I'm going to accept my condition. I leave it to the Lord and I live it day by day."

But at age 75, the retired archbishop is learning Spanish. He quotes the Code of Canon Law and Second Vatican Council documents from memory. As well, he muses about what he would do if someday he returned to active ministry.

"If my health gains, I would like to do some sort of ministry, to do some teaching."

A few months ago, he even ordained a deacon for the archdiocese - "my good friend Bob Jacobson," the former Lutheran bishop who will be ordained a Catholic priest next month.


Ministry cut short: Guimond became archbishop at the advanced age of 69 with the prospect of only six years of ministry before retirement. Even that was cut short by his health problems.

"The image that comes to me is that of an unfinished symphony."

Arthé Guimond was born near Rimouski, Quebec, one of 11 children. The family moved to the Peace River Country in 1951. Six years later, Guimond was ordained a priest for the northwestern Alberta archdiocese. He will celebrate his 50th anniversary of ordination on June 23.

After ordination, he served in parishes, studied in Montreal and Rome, taught in a seminary, and served as a theological advisor to the Canadian Conference of Catholic Bishops for 12 years.

Found his niche: He'd been away from Alberta for a long time, but when he returned, it seemed he'd found his niche as a pastor to parishes in Fairview and Peace River.

But in 1998, Archbishop Henri Goudreault died suddenly and the priest consultors for the archdiocese chose Guimond to be the archdiocesan administrator. It took two more years before the pope appointed him archbishop.

Now, looking back on his "unfinished symphony," Guimond speaks of four principles derived from Vatican II that guided his work as archbishop:

1. Allowing the light of Christ to shine on the face of the Church.

2. Seeing the Church as a communion of people with God.

3. Seeing the work of the Church as one of co-responsibility. Bishops are co-responsible for the whole Church with the pope as well as for their individual dioceses; the laity are the front line of the Church whose role is to consecrate the world to Christ.

4. Treating evangelization as the reason for the Church to exist.

"These points to me are like an overall program," Guimond said. "Much of this is not done yet. I leave it to the new bishop to complete the work. I am confident he will do very well."

He sees the adult faith education program he helped to develop as a cornerstone of the archdiocese. "The people who took it are extremely positive. We touched over a hundred people that way."

He also cherished the work of Catholic schools and the faith formation of youth.

Guimond said the archdiocese has an important ministry to Aboriginal people. "We have to rethink the mission to the natives, putting the emphasis more on their taking responsibility for themselves."

As well, the archdiocese is home to the booming population of Grande Prairie as well as well-established French and English rural communities.


"We have to find ways to keep our own culture meanwhile living with other cultures."

Residential school 'adventure': As archbishop, he said, he left many issues still to be dealt with. "A big one is what happens to the diocese after the adventure of the residential schools."

That "adventure" almost bankrupted the archdiocese. Father Charles Lavoie, the archdiocesan administrator after Guimond stepped down, said the residential school lawsuits "kind of paralyzed us."

The diocese, which "has never been very rich," has signed an agreement to pay out "a significant amount" of money to settle the suits and also faces legal bills, Lavoie said.

Guimond said he "would love" to attend the Jan. 25 installation of his successor, Archbishop Gerard Pettipas, although he admits that he is not a good candidate for making a long trip.

He would also love, it appears, to find a way to live in his home archdiocese.

"I left my heart in the Peace River Country," he said. "I did the best I could and I felt at home over there.

"I would not have liked to be a bishop elsewhere. I loved the people and I loved the country. The people were very receptive to me. Not for one moment would I have wanted to be elsewhere."

May his soul and the souls of all the faithful departed,
through the mercy of God, rest in peace. Amen.

Show gracious favor, O Lord, we pray, to the works of penance we have begun, that we may have strength to accomplish with sincerity the bodily observances we undertake. Through our Lord Jesus Christ, your Son, who lives and reigns with you in the unity of the Holy Spirit, one God, for ever and ever.

This is a special day for the Jesuits, who claim today’s saint as one of their own. It’s also a special day for people who have a special devotion to the Sacred Heart of Jesus—a devotion Claude la Colombière promoted, along with his friend and spiritual companion, St. Margaret Mary Alacoque. The emphasis on God’s love for all was an antidote to the rigorous moralism of the Jansenists, who were popular at the time.

Claude showed remarkable preaching skills long before his ordination in 1675. Two months later he was made superior of a small Jesuit residence in Burgundy. It was there he first encountered Margaret Mary Alacoque. For many years after he served as her confessor.

He was next sent to England to serve as confessor to the Duchess of York. He preached by both words and by the example of his holy life, converting a number of Protestants. Tensions arose against Catholics and Claude, rumored to be part of a plot against the king, was imprisoned. He was ultimately banished, but by then his health had been ruined. 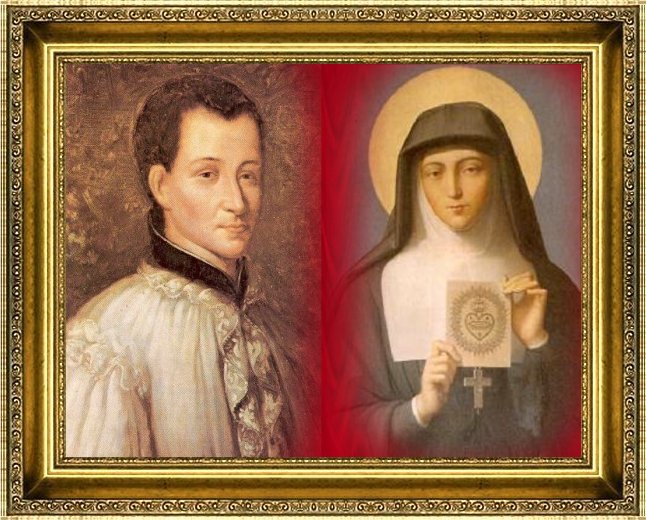