Saturday of the First Week in Lent/OM: Saint Polycarp, Martyr - Visit to Prince of Peace School 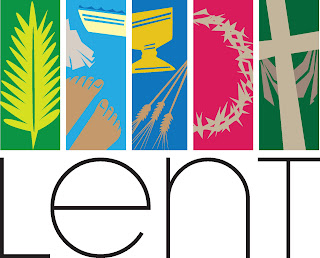 Turn our hearts to you, eternal Father, and grant that, seeking always the one thing necessary and carrying out works of charity, we may be dedicated to your worship. Through our Lord Jesus Christ, your Son, who lives and reigns with you in the unity of the Holy Spirit, one God, for ever and ever. 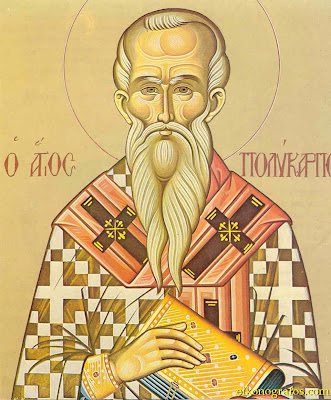 "To the angel of the church in Smyrna write: These are the words of him who is the First and the Last, who died and came to life again. I know your afflictions and your poverty—yet you are rich! I know the slander of those who say they are Jews and are not, but are a synagogue of Satan. Do not be afraid of what you are about to suffer. I tell you, the devil will put some of you in prison to test you, and you will suffer persecution for ten days. Be faithful, even to the point of death, and I will give you the crown of life. He who has an ear, let him hear what the Spirit says to the churches. He who overcomes will not be hurt at all by the second death. (Revelation 2:8-11)

* * *
Saint Polycarp was disciple of Saint John the Evangelist, and Saint John ordained him bishop of Smyrna. And there were at Rome then two heretics, that one was called Marcian and that other Valentine, the which had deceived much people by their false doctrine. Then Saint Polycarp went to Rome on Easter-day, and there by his predication he brought again to the faith them that they had deceived. He wrote to the Philippians a much fair epistle, and much profitable, the which is yet read in Asia unto this day. It happened that in the time that Marcus Antoninus and Marcus Aurelius reigned, which was the year of grace one hundred and sixty-two, was made the fourth persecution on christian people, after the Emperor Nero, through all Asia.

Saint Polycarp heard how the people cried and was moved, he therefore was never moved, but abode without dread. And he was gracious and courteous in manners and pleasant in regard, and tarried always in the city as an hardy champion of God. He was so much required of the people that he departed from the city with their familiar friends, that he went to the field nigh unto the city, and there he prayed all the night for the peace of all holy church. And thereof had he a custom all the days of his life.

It happed that three days before that he was taken, as he prayed in a night he had a vision, that seemed that his hair was burnt, and when he awoke he told to them that were with him the vision, and expounded it to them, saying that: For certain he should be burnt for love of God. When he saw that they approached him that would have taken him, he went to meet them and right gladly received them, whereof they were much abashed that they were commanded to take so good a man. And anon he laid the table to his enemies, and made to them as good cheer as they had been his friends, and gave to them largely wine and meat, and get of them leave to pray an hour, and all that hour he prayed much devoutly for all the state of holy church.

When the hour was passed he mounted upon an ass, and was brought into the city, and as they led him, Herod came, which wwas provost of the country, and his father with him, and they took him into a chariot with them, and said to him much sweetly: Wherefore do ye not sacrifice as the others do? What harm is it to call Cæsar his lord, and to do sacrifice to the gods for to live surely? And when they saw that it availed not, and that always he was firm and constant in the law of God, they were much wroth with him and did to him much harm in the chariot, and as he approached the city a great multitude of people began to murmur against him. Anon a voice descended from heaven saying unto him: Polycarp be strong and constant. That voice was heard of many but none saw it. Then anon it was told to the provost all openly, that Polycarp had three times confessed to be christian.

When these tidings were heard all the people of the city of Smyrna...began to cry in great ire: This is the master and doctor of all the christian people that be in Asia, and hath destroyed all our gods, we require that he be burnt all quick. Then the people assembled much wood and brought him to a stake. And when they brought him to the stake they would have bound him thereto, and nailed the bonds with great nails. Then he said to them: Let me alone, for he that hath ordained me to suffer this torment of fire shall give to me virtue of patience, without moving me from this place, for to endure and suffer the flame of the fire.

Then the tyrants left the nails, and bound him with cords to the stake, and his hands bound behind him. And as in his passion he praised and blessed our Lord, and the fire was burning and a great flame shining, a much notable miracle was showed right there to much people, which God showed to the end that it should be showed unto all other. And the miracle was this, that the flame departed all about him in manner of a chamber by virtue of a sweet wind that came from heaven, and the body of the martyr was not as flesh burnt in the flame, but as fair as it had been purified in a furnace, and they that were about him felt an odour so sweet as it had been incense or precious ointment.

When the tyrants saw that the fire might not consume the body of the glorious martyr, they made the ministers to approach and did them to smite him through the body with a spear, and then issued out of his glorious body so great abundance of blood that it quenched the fire. And when the people saw the miracle they departed, having much marvel that they did so much cruelty to the friends of God. And with this glorious martyr were twelve other martyrs martyred, for to get the joy of heaven. The which grant us the Father, the Son, and the Holy Ghost. Amen. [The Golden Legend]


* * *
God of all creation, who were pleased to give the Bishop Saint Polycarp a place in the company of the Martyrs, grant, through his intercession, that sharing with him in the chalice of Christ, we may rise through the Holy Spirit to eternal life. Through our Lord Jesus Christ, your Son, who lives and reigns with you in the unity of the Holy Spirit, one God, for ever and ever.
* * * * * *

VISIT TO PRINCE OF PEACE SCHOOL 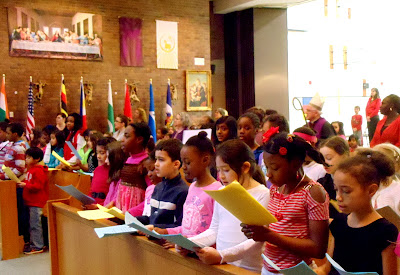 As part of the Visitation of St. Peter's Parish last weekend, Fr. Geoffrey Kerslake and I visited Prince of Peace School a few days beforehand.

The school shares a chapel with the parish, which is supplemented with additional chairs in the attached gymnasium, which conveniently serves both parish and school.

We are grateful to Father Joseph Vayalil, Pastor and Mr. Stephen Gay, Principal, as well as the school staff for the warm welcome.

Here are some photos from the School Visitation, a most joyful occasion; pictures of the parish Masses will be forthcoming. 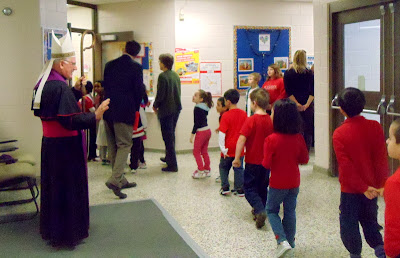 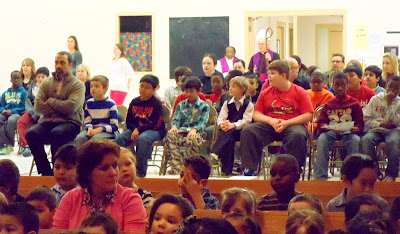 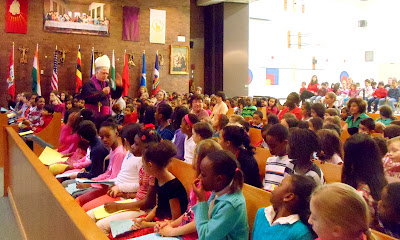 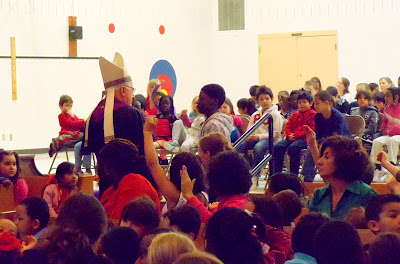 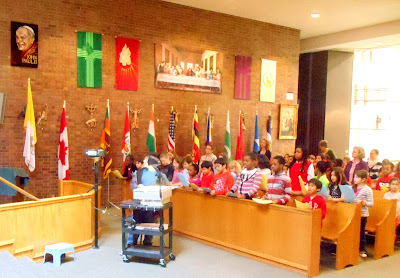 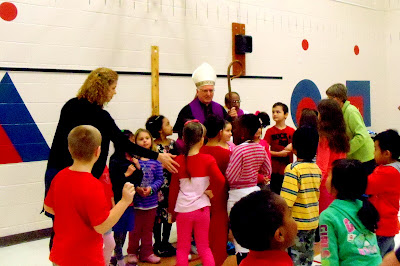 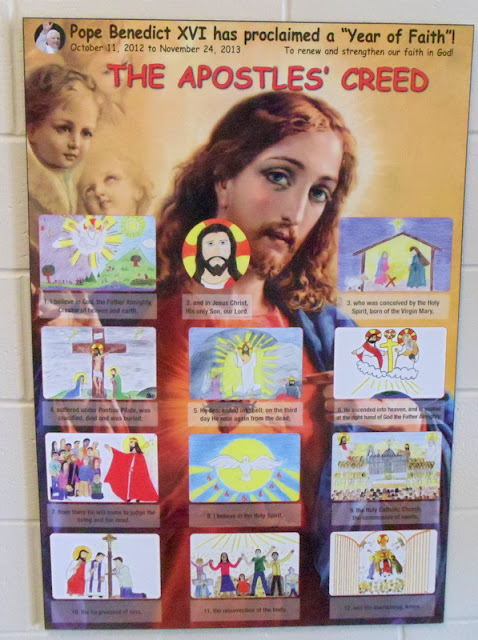