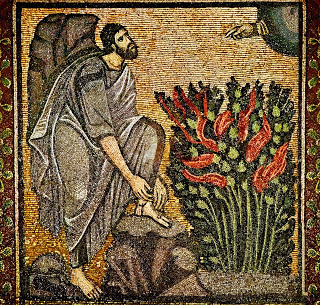 The Exodus reading describes God's self-revelation in the burning bush, Moses' called and commission and how God made known His mysterious Name. It shows how God far transcends our world and yet can be made present on earth.

We see how weak, unworthy human beings can become involved with God's saving plans to rescue those in physical bondage or in physical and spiritual servitude—all who are caught in sin or sinful social structures. God revealed himself as the God who had been deeply committed to the ancestors of the suffering Israelites.

In answer to Moses' inquiry God revealed his Name, Yahweh a word that was and remains today very difficult to translate. Some suggest Yahweh means, “I Am Who I Am,” or “I Will Be Who I Will Be”, indicating that God cannot be grasped by human categories. Others prefer the meaning, “The One Who Causes to Be”—the God who is the origin of all life and all saving activity.

Out of reverence, pious Jews simply wrote the four sacred letters, YHWH without pronouncing the vowels in the divine name, saying instead Adonai, “the LORD”. To respect Jewish sensibilities, Christians are asked to say “the LORD” when the name Yahweh is to be read or spoken in public.

God's relationship to the chosen people of Israel was and remains an elusive presence: burning bush, pillar of cloud by day and pillar of fire by night. What is clear is that God appears in our world to save those he loves. The divine presence became fully manifest in Jesus, who, like the Father, comes to save us by calling us to a change of heart.

In today's gospel, Jesus speaks of two disasters that were in the news during his ministry. People told Jesus about some Galileans (their neighbours?) killed by Pilate while they were offering their sacrifices in the Temple, expecting that he would comment. Aware that many of his contemporaries would think this implied that these people were being punished by God for some sin, Jesus stated their speculation (“Do you suppose these Galileans...were greater sinners than any other Galileans?”), only to deny it outright (“They were not, I tell you”).

Even today, Jesus' teaching that accidents or illnesses are not punishments from God is difficult for people to accept. While denying that accidents are divine retribution, Jesus drew a lesson from the sudden deaths—a call to repentance: “Unless you repent you will all perish (spiritually) as they did (physically)”.

Sudden deaths challenge those still alive to reformation of life, coming to terms with their status as sinners loved by God. Biblical teaching asserts that God does not permit accidents to happen to people to punish them for their sins.

According to Jesus' parable, neither does God lie in wait for the sinner to be caught in sin. Instead, the key point of the parable suggests that God, under the image of the owner of the fig tree, is infinitely patient.

A mature fig tree should produce fruit every year, just as human lives should bear the fruits of good deeds. This fig tree had been barren ‘for three years” and, not only did it not bear figs, it seemed to be draining nourishment from the other vineyard plants.

Some human lives seem to produce little or even to cause damage to others. But like the owner of the garden, God listens to the gardener's appeal for patience with the unproductive (and hurtful) and his suggestion of further treatment (“give me time to dig round it and fertilize it”). God gives people the time they need.

Still, there will be a day of reckoning and, if a person, instead of bearing fruit, continues in procrastination and non-productivity, he or she must be ready to face the fate of the barren fig tree. Here we find echoes of the warnings Paul noticed in the history of Israel (second reading).

Pilate's malice may have occasioned the deaths of some Galileans and 18 people from Jerusalem may have died by chance. But the fig tree (some individuals) will die spiritually because of their inactivity and unresponsiveness to God's appeal made by Jesus and His Church: “Unless you repent, you will all perish.”

Keep your family, O Lord, schooled always in good works, and so comfort them with your protection here as to lead them graciously to gifts on high. Through our Lord Jesus Christ, your Son, who lives and reigns with you in the unity of the Holy Spirit, one God, for ever and ever. 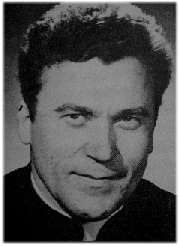 Commended to our prayers is the soul of Fr. Victor SKILANDZIUNAS, who died on Sunday, February 24, 2013 at the age of 93.

Father served in a number of parishes in the Archdiocese of Ottawa from 1954-1970 and from 1972-1984 as Chaplain at the Ottawa Carleton Detention Centre. He was also Chaplain of the Lithuanian Canadian Community in Ottawa.

Mass of the Resurrection at Lithuanian Martyrs Parish, 494 Isabella Avenue, Mississauga, ON on Saturday, March 2 at 1:00PM, followed by burial in St. John's Lithuanian Cemetery, Mississauga.

Requiescat in pace.
Posted by Archbishop Terry at 6:05 AM