Today is a travel day, so here are brief descriptions of the martyr saints that we can observe as optional memorials in this Easter season: 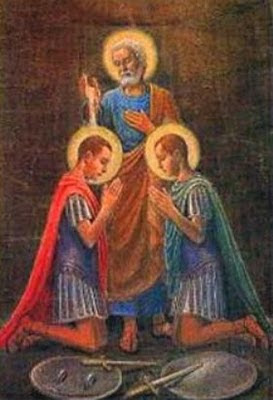 Sts. Nereus and Achilleus are associated with St. Domitilla, as may be seen from this summary, taken from an article by Dom Gueranger:

It was under the persecution of Domitian, during which John the Evangelist was condemned to be burned alive in the cauldron of boiling oil, that Flavia Domitilla was honored with banishment and death for the sake of our Redeemer, whom she had chosen for her Spouse. She was of the imperial family, being a niece of Flavius Clemens, who adorned the consular dignity by martyrdom. She was one of the Christians belonging to the court of the Emperor Domitian, who show us how rapidly the religion of the poor and humble made its way to the highest classes of Roman life.

A few years previous to this, St Paul sent to the Christians of Philippi the greetings of the Christians of Nero's palace. There is still extant, not far from Rome, on the Ardeatine Way, the magnificent subterranean cemetery which Flavia Domitilla ordered to be dug on her praedium, and in which were buried the two martyrs, Nereus and Achilleus, whom the Church honors today together with the noble virgin who owes her crown to them. Nereus and Achilleus were in Domitilla's service. Hearing them one day speaking of the merit of virginity, she there and then bade farewell to all worldly pleasures, and aspired to the honor of being the Spouse of Christ. She received the veil of consecrated virgins from the hands of Pope St Clement: Nereus and Achilleus had been baptized by St Peter himself.


The bodies of these three Saints reposed, for several centuries, in the Basilica, called the Fasciola, on the Appian Way; and we have a Homily which St Gregory the Great preached in this Church on their feast. The holy Pontiff dwelt on the vanity of the earth's goods; he encouraged his audience to despise them by the example of the three martyrs whose relics lay under the very altar around which they were that day assembled. "These Saints," said he, "before whose tomb we are now standing, trampled with contempt of soul on the world and its flowers. Life was then long, health was uninterrupted, riches were abundant, parents were blessed with many children; and yet, though the world was so flourishing in itself, it had long been a withered thing in their hearts." [— Excerpted from Abbot Gueranger, O.S.B., The Liturgical Year.]

Grant, we pray, almighty God, that we who know how courageous the glorious Martyrs Nereus and Achilleus were in confessing you, may experience their loving intercession for us in your presence. Though our Lord. 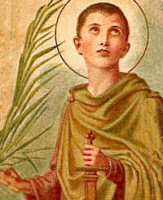 Pancratius was the descendant of a noble Phrygian family. As a youth of fourteen, he came to Rome while Diocletian and Maximian were in power (about 304). He was baptized by the Pope and given instructions in the Christian religion. Arrested for his action, he steadfastly refused to sacrifice to the pagan gods and was condemned to death. With manly courage, he bared his neck for the sword and received the martyr's crown. During the night his body was removed by the pious matron Octavilla, anointed with sweet smelling balsam and interred on the Via Aurelia.

Pancratius is the patron saint of fidelity to oaths. The basilica that Pope Symmachus erected over his remains about the year 500 later became a station church (since 1798 his relics have been lost). On the first Sunday after Easter the saint exhorted the catechumens gathered at his station church to remain loyal to their baptismal vows. The saint warns us to proceed slowly and prudently before taking an oath or vow. But once our word is given we must remain true to our pledge, true unto death itself, whether it concerns baptismal vows, ordination vows, profession vows, or marriage vows. Excerpted from Pius Parsch, The Church's Year of Grace.

May your Church rejoice, O God, confident in the intercession of the Martyr Saint Pancras, and by his glorious prayers may she persevere in devotion to you and stand ever firm. Through our Lord.


Posted by Archbishop Terry at 6:42 AM