The Holy Apostles Philip & James, the Less - Easter Sunday 5B 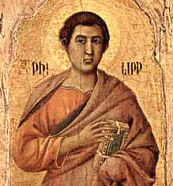 St. Philip The Apostle Philip was one of Christ's first disciples, called soon after his Master's baptism in the Jordan. The fourth Gospel gives the following detail: "The next day Jesus was about to leave for Galilee, and He found Philip. And Jesus said to him: Follow Me.

Now Philip was from Bethsaida, the town of Andrew and Peter. Philip found Nathanael, and said to him: We have found Him of whom Moses in the Law and the Prophets wrote, Jesus the Son of Joseph of Nazareth. And Nathanael said to him: Can anything good come out of Nazareth? Philip said to him: Come and see" (John 1:43ff). 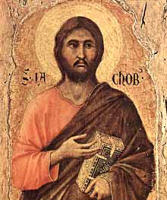 St. James the Less, a brother of the Apostle Jude, was of Cana of Galilee. He is the author of one of the Catholic Epistles in the New Testament. He was favored by an appearance of the Risen Christ (I Cor. 15:7). After the dispersion of the Apostles he was made Bishop of Jerusalem. He was visited by St. Paul (Gal. 1:19). He spoke after Peter at the meeting of the Apostles (Acts 15:13).

When he refused to deny the Divinity of Christ, the Jews cast him down from the terrace of the temple and clubbed him to death. The Breviary contains a very moving description of his death. "When he was ninety-six years old and had governed the Church for thirty years in a most holy manner, the Jews sought to stone him, then took him to the pinnacle of the temple and cast him off headlong. As he lay there half dead, with legs broken by the fall, he lifted his hands toward heaven and prayed to God for the salvation of his enemies, saying: Lord, forgive them for they know not what they do!

While the apostle was still praying, a fuller struck his head a mortal blow." His relics now rest next to those of St. Philip in the church of the Holy Apostles in Rome, and their names are mentioned in the first list in the Canon of the Mass.  [Both excerpts taken from Pius Parsch, The Church's Year of Grace.]


O God, who gladden us each year with the feast day of the Apostles Philip and James, grant us, through their prayers, a share in the Passion and Resurrection of your Only Begotten Son, so that we may merit to behold you for eternity. Through our Lord Jesus Christ, your Son, who lives and reigns with you in the unity of the Holy Spirit, one God, for ever and ever.

The words Jesus speaks in today's gospel are a continuation of His farewell discourse at the Last Supper. It is part of an extended expression of Jesus' legacy to His disciples (John 13.12-17.26). Its focus evokes ancient biblical images: the vine, vine-grower and viniculture practices such as pruning, breaking off dead branches for burning, and harvesting others that produce abundant fruit (John 15.1-17).

For example, a sacred poem depicted God's planting of a vine and its flourishing growth (“You brought a vine out of Egypt ... and planted it”) as the culmination of the exodus event (cf. Psalm 80.7-11). Also, Isaiah described God crooning a love-song to Israel under vineyard imagery (5.1-7); so the vineyard and God's people became interchangeable (“For the vineyard of the Lord of hosts is the house of Israel”). In addition, Jesus told several parables in which vineyard activities were prominent (Mark 12.1-12; Matthew 20.1-16; 21.28-32).

As he did with a number of other images (the bread of life, good shepherd, light of the world, resurrection and the life), by means of the “I am” formula Jesus personalized the vine motif (“I am the true vine”). Jesus expanded on the basic theme by commenting on the Father's role (“my Father is the vine-grower”) and, implicitly, of his disciples' part as branches abiding in him (“as the branch cannot bear fruit by itself unless it abides in the vine, neither can you unless you abide in me”).

While other “I am” sayings in the gospel include invitations to “come” to Jesus and to “believe” in him (cf. John 6.35; 8.2; 10.9), the Vine-saying invites people, instead, to remain united with Jesus (“abide in me as I abide in you”). Spiritually linked with Jesus, disciples share in an ongoing and life-sustaining fellowship (“because apart from me you can do nothing”).

The First Epistle of John develops this vision further, by arguing that it is obedience to God's words, given by Jesus, which lies at the heart of this spiritual “abiding” (“all who obey his commandments abide in him, and he abides in them”). For God's commandments are two-fold, consisting as they do in believing in his Son's name and in loving one another. As the Christian lives out these two commands, the Holy Spirit simultaneously effects and manifests a mystical union between the Christian and his or her Lord (“By this we know that he abides in us, by the Spirit that he has given us”).

The first reading offers an example of how great a struggle may be involved in the Christian community's recognition and acceptance of the Holy Spirit's transforming power at work in an individual such as Saul of Tarsus. For Luke, the “conversion” of Paul was so important that he narrated it three times (Acts 9.1-31; 22.6-21; 26.1-23), each telling of the story focusing on different facets of this dramatic episode in the early Church's life.

In each account, Saul persecuted members of the church and came to learn, through his Damascus Road experience, that Jesus identified with those suffering at his hands. As Saul lay groping on the ground, blinded by his encounter with the Risen Christ, he asked “Who are you, Lord?” The reply he received was, “I am Jesus whom you are persecuting”. Once reoriented and converted to faith in Jesus, Saul attempted to join the Jerusalem community, but met resistance when they could not “believe that he was a disciple”.

Barnabas, a disciple renowned in the Acts for his openness to the Holy Spirit's work in various ways, became an apologist for Saul, testifying “how in Damascus Saul had spoken boldly in the name of Jesus”.

Despite his all-encompassing ministry in the Holy City (“Saul went in and out among them in Jerusalem”), he roused the ire of a prominent group of Jewish zealots, the Hellenists, so that his life became at risk. Though forced to leave for Caesarea where he could embark for his native city of Tarsus, this “set-back” would become the providential first step leading to Saul's great missionary voyages once Barnabas had introduced him to the church at Antioch.

Thus, on every page of the Acts, Paul became an eminent exemplar of Jesus' dictum, “My Father is glorified by this, that you bear much fruit and become my disciples”.


Posted by Archbishop Terry at 6:48 AM