﻿
Easter, the new Passover, and Pentecost -- the Jewish celebration fifty days later -- are the hinges of the Church's liturgical year. The Greek Old Testament twice used 'Pentecost' to designate the 'feast of weeks', the second of Israel's three great annual pilgrimage celebrations (the third is the feast of 'booths' in the fall).

In the Hellenistic era, the covenant God made with Noah (Genesis 9.8-17) was renewed, but after the destruction of the Temple Pentecost was associated with God's bestowal of the Torah on Sinai. For Luke, Pentecost fulfils Jesus' promise to his followers that they would be empowered once they had received the Holy Spirit from on high (Acts 1.5, 8; cf. Luke 24.49).

The evangelist does not tell his readers where the early community was gathered when the Holy Spirit came, only that 'they were all together in one place'. Tradition suggests the group of believers numbering about 120 persons -- the minimum number in Jewish law to establish a new community -- met in 'the room upstairs' (Acts 1.13). Whatever its precise location, there they gathered around the apostles, 'with certain women including Mary the mother of Jesus, as well as his brothers', and devoted themselves to prayer.

Powerful symbols describe the Spirit's coming: there was 'a sound like the rush of a violent wind'; also 'divided tongues, as of fire, appeared among them, and a tongue rested on each of them'. These were the outward signs of the invisible reality, that 'all of them were filled with the Holy Spirit'. The subsequent external manifestation of the indwelling Spirit was that these all 'began to speak in other languages, as the Spirit gave them ability'.

Elsewhere in Scripture the 'Spirit' is likened to the .wind' (cf. John 3.8). In fact, pneuma in Greek has both meanings. The noise made by the violent wind of the Holy Spirit was so palpable that its sound seemed to have 'filled the entire house where they were sitting'. In the past, God's presence at Sinai had been accompanied by a loud sound (cf. Exodus 19.16-19), while a turbulent wind had been associated with the theophany to Elijah (1 Kings 19.11-12) as well as his ascent to God in the flaming chariot (2 Kings 2.11).

God had been revealed to Moses in the flaming bush (Exodus 3.2) and the image of a fire was often featured in moments of divine presence. John the Baptist foretold that God's coming in judgment would be manifest in a divine, cleansing fire (cf. Luke 3.16). Luke's description of the divided flames says that a tongue came to rest on each person. It is interesting to note that in Jewish tradition fire occasionally was said to rest on the heads of rabbis when they studied or disputed about God's law.

The ancient world valued highly ecstatic speech because it was thought to derive from direct possession by the deity. Paul's discussion of the phenomenon of glossolalia or 'speaking in tongues' (cf. 1 Corinthians 10-12) suggests that ecstatic, babbling speech was known at Corinth. Luke stresses not the ecstatic but the communicative feature of this religious experience ('all heard them speaking in their own languages'). One commentator tries to resolve the two types of speech by suggesting the hearers thought they heard and recognized words of praise to God in their own dialects ('in our own languages we hear them speaking about God's deeds of power').

The sequence in the list of nations present at the first Christian Pentecost ('Parthians, Medes and Elamites ...') has long fascinated interpreters, but no one has yet been able to give a satisfactory explanation for its origin (a list of nations where Jews resided?) or the order in which regions are mentioned.

The catalogue of nations begins in the east and moves westward, from Persia and Iran towards modern Iraq, with Judea -- where Jerusalem is located -- suddenly appearing in the midst of the pattern. Next, areas of Asia Minor are mentioned, then Egypt and the region west of it; finally comes Rome, capital of the Empire, where Acts will terminate. 'Jews and converts' suggests that mix of God's people and Gentiles who would be fashioned by 'the Spirit of Truth' into the mystery called 'the Church'.

In Galatians, Paul shows that the Spirit helps believers overcome the 'desires of the flesh' to produce 'the fruit of the Spirit'.

THE BLESSED SACRAMENT
IN THE STREETS OF MONTREAL 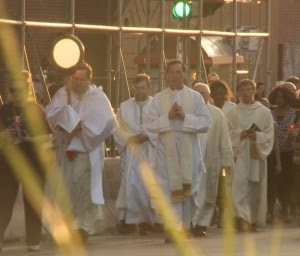 On Sunday evening, several of us bishops took turns carrying the monstrance with the Blessed Sacrament in a procession from St. Joseph's Oratory to the Cathedral of Mary, Queen of the World in downtown Montreal.  Kyle Ferguson, the new national coordinator of Canadian Catholic Campus Ministry Association, sent the following report to Salt and Light TV's blog.

On Saturday evening about 450 young people accompanied by Bishops Lepine (Montreal), Dowd (Montreal), Lacroix (QC) and Prendergast (Ottawa) took part in a Eucharistic procession which started at St. Josep’s Oratory and cut right through the heart of downtown Montreal arriving at the Cathedral: Mary Queen of the World.

For five kilometres, the four bishops walked shoulder to shoulder sharing the task of carrying the monstrance every step of the way. As one got fatigued the other bishop stepped up and took on the weight for his brother bishop. It was an incredible witness of episcopal friendship, collaboration and solidarity.

When we turned onto St. Catherine’s Street, Bishop Lepine, the Archbishop of Montreal, held the monstrance high and quite bravely lead us down the middle of St. Catherine’s with 450 young people joyfully clapping, singing and bearing witness to Christ in the midst of the glamour, glitter and sensuality of St. Catherine’s night life as it unfolded.

In this act, it was as though the Archbishop was reclaiming the city and its people to Jesus. Those who passed by were visibly touched by this public witness to Christ, many stopping to applaud us, take pictures, join in the procession, or with arms tightly crossed to their chest watch curiously. The procession did not go unnoticed!

People, young and old, were being drawn to their apartments and shop windows to witness not a protest of aggression unfolding, but a procession of love outpouring. Moreover, spectators were being drawn out of themselves, out of the mundane and into the mystery and joy of the Christian faith. To say the least, it certainly was a juxtaposition to the recent protests in Montreal.

I really think the bishops of Quebec should be commended for this act of bravery. I am certain that the bishops of Montreal received no shortage of advice telling them to cancel this procession given (a) the current circumstances of the city and its student protests, and (b) the precarious position, in general, of religion and its public displays in Quebec society. Yet, despite these serious concerns, they went ahead and took the risk.

The Quebec Church, I think, provided a great witness to three things this weekend: first, that we need to be bold in our proclaiming of the Gospel, yes, we must listen and be attentive, and have charity rooted in everything we do, but we cannot hide out light under the bushel basket; second, being bold will involve vulnerability and risk and if we try to mitigate all risk and vulnerability from our efforts we end up burying our talents in the sand; and third, the unity and community of our Church is essential for effective proclamation and witness – no person is an Island, we need to stand together.

Posted by Archbishop Terry at 6:02 AM