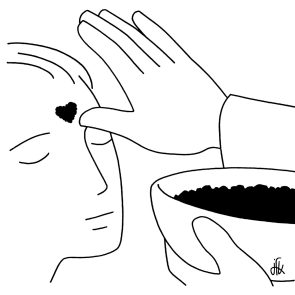 Grant, O Lord, that we may begin with holy fasting this campaign of Christian service, so that, as we take up battle against spiritual evils, we may be armed with weapons of self-restraint. Through our Lord Jesus Christ, your Son, who lives and reigns with you in the unity of the Holy Spirit, one God, for ever and ever.

Lent is about each Christian's rediscovering and re-appropriating the death to sin and rising to new life in Christ that took place when he or she was baptized.

As Lent approaches, Christians wonder about ways to develop spiritual union with Jesus.

Jesus' replies in today's gospel are all drawn from the Word of God. This suggests that meditating on Scripture is a key spiritual discipline for personal growth.

An excellent way to be rooted in God's Word is the practice of sharing in daily Mass, a favourite Catholic Lenten observance. For the daily Eucharist affords the opportunity to hear God's Word and to celebrate its fulfilment in the Paschal Mystery by Holy Communion.

The Mass aired on Vision-TV by the National Catholic Broadcast Council as well as on Salt and Light Television helps the homebound or those who do not have access to daily Mass in their locality to hear the Scriptures read and to meditate with the homilist on what is proclaimed. Households where members must work or be at school could video-tape the Daily Mass and watch it prayerfully later in the day as a personal or family Lenten exercise.

Those unable to attend daily Mass may wish to devote time each day to reading a portion of God's Word, either reflecting on the Sunday readings through the week or meditating for a few minutes on the Lenten weekday scriptural readings.

Other followers of Jesus might prefer to read continuously through a gospel (Luke and John are especially apt this year) or another biblical book. Exodus and Deuteronomy, with their ‘Lenten’ themes of liberation, temptation, sin and renewal, come readily to mind, as does Paul's letter to the Romans.

﻿
In his three temptations, Jesus refuted the devil with quotations from the Book of Deuteronomy, a biblical text Jesus must have contemplated often. In reply to the first temptation Jesus recalled that “one does not live by bread alone”. In other words, besides attending to one's physical sustenance each day, one needs to feed on God's Word for spiritual nourishment.

In the second reading Paul, quoting from Deuteronomy as Jesus had, says that for those who ground themselves in study and reflection of the Scriptures, “the Word is very near you, on your lips and in your heart” (Deuteronomy 30.14). Grasping God's Word inwardly, then, helps disciples not only to face temptations but also to meet the challenges to believe that come with each one's struggle to be faithful to God's way.

The closing of the temptation account noted Satan's departure “when the devil had finished every test”. This suggests that the three tests mentioned were simply typical of other temptations. As well, we learn that the devil left Jesus only “until an opportune time”, likely the Passion events when “Satan entered into Judas Iscariot” (Luke 22.3).

Unlike the versions of Mark and Matthew, Luke said nothing about angels ministering to Jesus after the temptations ended (cf. Mark 1.13; Matthew 4.13). Later, Luke would note the presence of a comforting angel during Jesus' Gethsemane prayer (22.43-44).

Besides prayer, Lenten practices traditionally include fasting and almsgiving. The Church prescribes fasting (only one full meal) and abstinence from meat on Ash Wednesday and Good Friday. Abstinence is recommended on the other Fridays of Lent, though Catholics in Canada may substitute other acts of penance instead.

Money saved by self-denial is given to the poor in solidarity with “the least of Jesus' brothers and sisters” (the ShareLent appeal being a privileged beneficiary, but Catholics, of course, are free to choose another charity).

Lenten Preface III presents this, too, as the response of disciples to God's goodness, “For you will that our self-denial should give you thanks, humble our sinful pride, contribute to the feeding of the poor and so help us imitate you in your kindness”.

The Israelite identified with Israel's history when he and his family came before the Lord at harvest time (“a wandering Aramean was my ancestor.... The Lord brought us out of Egypt”). So, too, the Christian identifies with Jesus who won the victory over temptation and sin. The stories of Jesus and the Christian become one through many Lenten observances, but especially scriptural prayer.

Posted by Archbishop Terry at 6:17 AM