General: Knowledge of God's Word That the word of God may be better known, welcomed and lived as the source of freedom and joy.

As the Ottawa priests drew near to Cap-de-la-Madeleine and the Shrine of Our Lady, they could not help noticing the many signs gracing the highways and various buildings drawing attention to the founding of Three Rivers/Trois Rivieres 375 years ago.

What I like about the logo is the way the number seven (often written by Europeans with a bar through it to distinguish it from the number one) reveals the cross planted by French settlers from earliest days.

The top of the seven becomes a torch giving light and hope for the future (a veiled image of the fire of the Holy Spirit?)

Let us pray that Our Lady, as the Star of the New Evangelization will intercede for us to find the way to the new evangelization, one that as Pope John Paul II suggested in "Ecclesia in America", would be new in its "ardor, methods and expression".

As the theme of the Synod preceding this Apostolic Exhortation indicated, the goal of all our pastoral activity should be to lead to an "Encounter with the Living Christ: the Way to Conversion, Communion and Soliarity in America"

Although Trois-Rivières was founded in 1634, its location was known to the French since 1535, when Jacques Cartier stopped here during a trip along the St. Lawrence and planted a cross on Île Saint-Quentin. It wasn't until 1599, however, that the name Trois-Rivières was first used by a geographer working for Champlain, Sieur Depont Gravé, who confirmed the name in 1603.

While navigating the river in the direction of Montreal, Sieur De Pont Gravé noticed a first tributary followed by a strip of land, then a second tributary followed by a strip of land, and finally a third tributary that he took to be a different river altogether. He was not yet aware that two large islands (Saint-Quentin and De La Poterie) divided the Saint-Maurice River into three branches at the spot where it flowed into the river.

The name Trois-Rivières was used over the years and became official in 1931. A major fur trading post during the first twenty-five years of its existence, Trois-Rivières was the cradle of a large number of voyageurs, explorers and coureurs des bois: Nicolet, Hertel, Godefroy, Radisson, des Groseillers, Boucher and Lavérendrye are the most famous of them.

Some Images from the First Two Days of the Priests' Retreat 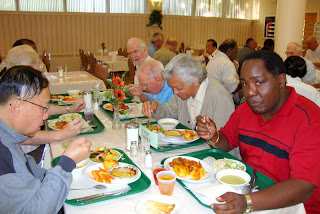 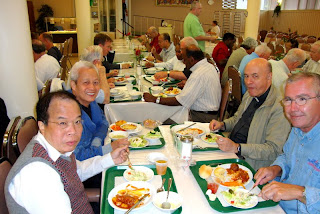 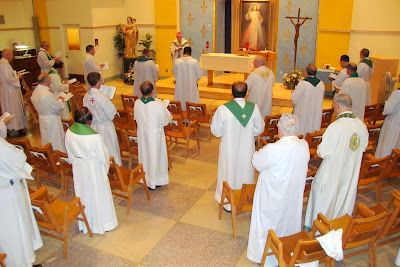 Posted by Archbishop Terry at 9:08 PM