At St. Clement's Parish, directed by the Priestly Fraternity of St. Peter, today was the Sunday after Ascension Thursday, a day on which I had been invited to celebrate Confirmations in the "usus antiquior", that is the ritual in force in 1962 (and the one by which I was confirmed in 1952).

So this morning, I confirmed some thirty plus youth and adults in a Confirmation ceremony that began at 10:30 and was immediately followed by a Solemn Pontifical Mass (my second time celebrating in the Extraordinary Form [EF]--the first was on the occasion of my earlier visit to St. Clement's in January 2008).

The altar boys knew their way around the sanctuary quite well and I was ably assisted by the Superior and Pastor Father Philip Creuer, FSSP and his curates, Fathers Joseph Lee and Denis Cruchet.

The Mass was truly reverent, particularly at the time of Holy Communion, and I know this was one of the reasons that Pope Benedict XVI in his Motu Proprio enlarged the possibilities for priests to celebrate in the EF. It will be interesting to see how the two forms will mutually enrich each other.

A wonderful luncheon for all followed in the parish hall with lots of opportunity for renewal of acquaintances, conversation and photos.

******
The return of the Ottawa seminarians from St. Augustine's Seminary in Toronto for the summer allows me the chance to interact with them as they assist by driving me to celebrations, setting up my vestments and paraphernalia for Mass, etc. It helps us--bishop and future priest--to get to know one another better.

Matthew Chojna, who has finished Second Theology drove me to Hawkesbury for a Mass of Thanksgiving at the Church of l'Ascension de Notre Seigneur Jesus-Christ, which (with Eglise St-Dominique) will close after the last Sunday Eucharist on June 21.

I noted to him en route the irony that, because of different calendars, I would be celebrating the Mass of the Sunday of the Lord's Ascension after I had celebrated the Mass for the Sunday after the Ascension!

Matt has just received a nomination to do his pastoral internship at St. Patrick's Parish in Fallowfield, where Father Stephen Amesse has recently been named pastor.

All kinds of wonderful adventures in mentoring await them both. 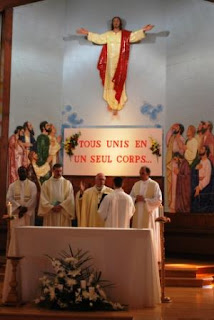 ******
The Mass of Thanksgiving was a wonderful celebration, even as it mixed gratitude to God for graces received over the 52 years of the parish's life and the 50 years of the church itself (opened in June 1959) with the sorrows of its imminent closure.

Some additions to the offertory procession symbolized the beauty of the liturgy and the graces received. At the end of Mass, two representative objects were entrusted to a couple to take to the new single parish church at the end of June: a framed photograph of the Church with a chalice and paten. The final blessing was given on the steps of the Church, after we had all processed out to "go and proclaim the Good News" in a new location.

Some years ago, declining levels of Sunday worship, the drop in the number of active priests available and the escalating costs of maintaining three good-sized churches in a town of 10,800 led to the formation of a single parish, called St. Pierre Apotre with three worship centres (the largest of which is the Church of St. Alphonse de Ligouri, which will remain open).

The last step in the restructuring is to move to a single church building that will incorporate the separate councils and bodies into one. This creates tensions as there are, for example, three councils of the Knights of Columbus, several choirs and other entities.

The two priests Abbe Jean-Pierre Fredette and Abbe Albert Kasadi (a Congolese on loan to our diocese) have challenging demands, but they have come a long way with their people and the diverse points of view. They will try to move ever more closely to the ideal of unity in the church spoken about by St. Paul in today's second reading from Ephesians:

I therefore, the prisoner in the Lord, beg you to lead a life worthy of the calling to which you have been called, with all humility and gentleness, with patience, bearing with one another in love, making every effort to maintain the unity of the Spirit in the bond of peace. (Ephesians 4:1-3, NRSV)
Posted by Archbishop Terry at 9:15 PM