The Holy Canadian Martyrs, Secondary Patrons of Canada - Sunday 26B: "Would That All Were Prophets" - CCCB Plenary Photos 
French Jesuits were among the first missionaries to go to Canada and North America after J. Cartier discovered Canada in 1534. Their mission region extended from Nova Scotia to Maryland.

The martyrdoms took place between 1642 and 1649: Goupil in 1642, Jogues and Lalande on October 18 and 19, 1646 in the area of what is now Auriesville, New York; Daniel on July 4, 1648, Brebeuf and Lalemant in March 1649, Garnier and Chabanel in December 1649--all of these five in Huronia, near present-day Midland, Ontario. Ten years after the martyrdom of St. Isaac Jogues, Kateri Tekakwitha was born in the same village in which he died. These martyrs are co-patrons of Canada.

The missionaries arrived in Canada less than a century after its discovery by Cartier in 1534, in the hope of converting the Indians and setting up "New France." Their opponents were often the English and Dutch colonists. When Isaac Jogues returned to Paris after his first capture and torture, he said to his superior: "Yes, Father, I want whatever our Lord wants, even if it costs a thousand lives." He had written in his mission report: "These tortures are very great, but God is still greater, and immense."

Isaac Jogues' declaration on leaving France to return to the mission in Canada is heroic:

"My heart tells me that if I have the blessing of being used for this mission, I shall go and I shall not return; but I would be glad if our Lord should fulfil the sacrifice where he began it, and that the small amount of blood I shed in that land should turn out to be an advance payment for that which I would give from all the veins of my body and heart."

In the Office of Readings we have an excerpt from the mission journal of St. John de Brébeuf, who had been a student of the great Jesuit spiritual writer, Louis Lallemant. He wrote:

For two days now I have experienced a great desire to be a martyr and to endure all the torments the martyrs suffered.... I vow to you, Jesus my Savior, that as far as I have the strength I will never fail to accept the grace of martyrdom, if some day you in your infinite mercy should offer it to me, your most unworthy servant.... On receiving the blow of death, I shall accept it from your hands with the fullest delight and joy of spirit.... My God, it grieves me greatly that you are not known, that in this savage wilderness all have not been converted to you, that sin has not been driven from it.
[Excerpted and adapted from Enzo Lodi, Saints of the Roman Calendar]

In 1999, the Canadian Conference of Catholic Bishops published a pastoral letter on the Canadian Martyrs to mark the 350th anniversary of the final deaths of these heroic priests in 1649.  It may be accessed at: http://www.cccb.ca/site/Files/martyrse.pdf.

O God, who chose to manifest the blessed hope of your eternal Kingdom by the toil of Saints John de Brebeuf, Isasac Jogues and their companions and by the shedding of their blood, graciously grant that through their intercession the faith of Christians may be strengthened day by day. Through our Lord Jesus Christ, your Son, who lives and reigns with you in the unity of the Holy Spirit, one God, for ever and ever.


When the Declaration of the Congregation for the Doctrine of the Faith Dominus Jesus (“on the uniqueness and salvific universality of Jesus Christ and the Church”) was published in the year 2000 it unsettled some Christians, including Catholics.

For it seemed to backtrack from the vision of the Second Vatican Council in its openness to other religions and to Christians separated from Rome. It might even have appeared to counter the tolerance manifested by Moses and Jesus in today's scriptural readings.

In Numbers, Moses revealed a generous spirit when Joshua wanted to put a stop to two unauthorized individuals, Eldad and Medad, who were given the gift of prophecy. 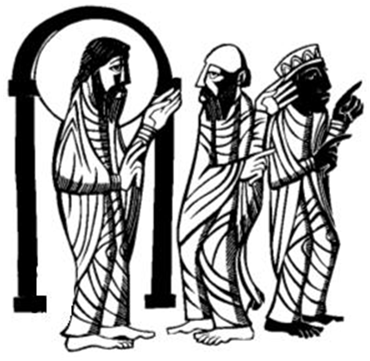 Prior to this manifestation of the Spirit's largesse, Moses had complained to God about the burdens of leading the chosen people. Heeding Moses' prayer, God had taken some of Moses' spirit and shared it with 70 elders chosen to assist with his leadership responsibilities.

In response to the gift of the spirit which had been in Moses these elders prophesied. But in contrast with Moses' unique and on-going gift of prophecy, the elders received the prophetic gift only for this occasion (“when the spirit rested on them, they prophesied; but they did not do so again”).

Mysteriously and in a seemingly unplanned way, when the spirit of Moses was being shared with the 70 elders some was spilled onto two people who stayed in their tents and were not with the 70 at the tabernacle.

Joshua implored Moses to stop such a runaway expression of God's Spirit by exercising his authority over them. Instead, Moses assured Joshua that he welcomed such a manifestation of God's insight among the people, as he had welcomed it among the 70 leaders (“would that all the Lord's people were prophets, and that the Lord would put his Spirit on them!”)

Likewise in the gospel, Jesus invited his disciples to embrace a tolerant spirit when several of them tried to curtail an exorcist found casting out demons in his name. Speaking for the Twelve, John said that they had forbidden the exorcist “because he was not following us”.

In reply, Jesus admonished them, saying they should not put constraints on such an exorcist. For he argued that such a person could not simultaneously use his name to perform an exorcism and “soon afterward” slander him. For “whoever is not against us is for us”.

Still, this same Jesus on another occasion uttered a saying that seems narrower and less open, “whoever is not with me is against me, and whoever does not gather with me scatters” (Matthew 12.30). And yet, despite appearances, these sayings of Jesus need not be contradictory, particularly if the former was spoken to the disciples about themselves and the latter to those indifferent about his message concerning themselves.

Apropos of these two sayings, the Protestant biblical interpreter Eduard Schweizer observed, ‘There are times when one can no longer remain neutral.... Ecumenical openness (Mark 9.40) and the unambiguous demand for a clear confession of Jesus (Matthew 12.30) are certainly compatible’ (The Good News according to Matthew [Atlanta: John Knox, 1975], p. 287).

The Doctrinal Congregation's purpose seems to have been to remind those who, in the name of tolerance, affirm that all religions and even all Christian denominations have equal validity as paths to salvation. For the Church has always maintained that God has proposed Jesus as the Way, the Truth and the Life. And this Lord Jesus established a will for his Church that, when lived in its purest form, must manifest certain features important for the salvation of his followers. Indeed, rigorous demands such as these were articulated in the pastoral decrees of Vatican II.

In subsequent sayings, Jesus starkly emphasized the need to maintain one's status as a disciple by avoiding sins that undermine an authentic following of him. The startling words that it is better to “enter [eternal] life” maimed or lame or with one eye than being whole “and to go to Hell” describe what is at stake in deciding to follow Jesus or not.

Like Jesus, James minced no words in excoriating the wealthy who perpetrated injustice against the poor. The material goods in which they had put their trust would recoil upon them with painful consequences (“your gold and silver have rusted, and their rust will be evidence against you”). 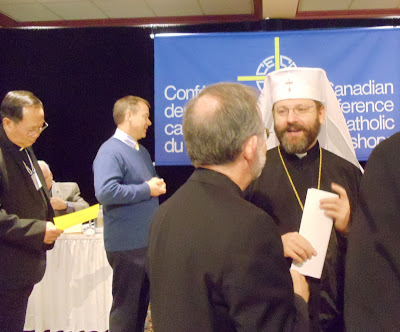 Our second day of the Plenary was very full: an address by the Major Archbishop of the Ukrainian Catholic Church (above and below); a presentation on the economic crisis and a meeting of the Board of CNEWA (Catholic Near East Welfare Association) Canada, etc.

Some photos of these aspects and of other features of the day: 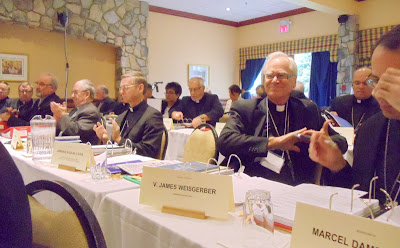 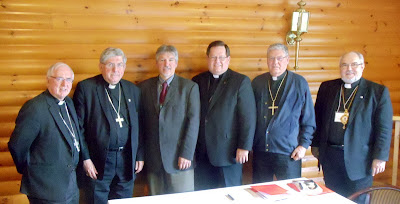 Posted by Archbishop Terry at 6:07 AM