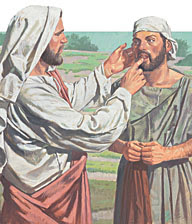 The Exodus of God's people from bondage in Egypt became a model for thinking about salvation. The Second Isaiah (chapters 40-55) foretold the return of Jewish exiles from Babylon as a `new exodus'.

This insight, in turn, inspired Isaiah's successors, writing in the fourth century B.C. (chapters 24-27 and 34-35), to apply the exodus motif to all God's saving deeds, now and in the future.

When God acts in favour of His beloved, the first evil driven out is fear (“Say to those of a fearful heart, ‘Be strong, do not fear. Here is your God.... He will come and save you’”).

Next the prophet addressed specific afflictions God would heal: “then the eyes of the blind shall be opened, and the ears of the deaf unstopped; then the lame shall leap like a deer, and the tongue of the speechless sing for joy”. A new, coming era is envisioned; Jesus called it the reign of God, and He put it into effect during His ministry.

This text from Isaiah figured in Christ's reply to John the Baptist when he wondered about the things he heard Jesus doing and asked Jesus, “Are You the one who is to come or are we to wait for another?” (cf. Matthew 11.2-6; Luke 7.18-23).

Isaiah's prediction may underlie Mark's understanding of Jesus' cure of “a deaf man who had an impediment in his speech”. One of the words used to describe the deaf-mute's problem means “could hardly speak” (Greek mogilalos) and is very rare. It appears only here in Mark in the New Testament and only in Isaiah 35.6 in the Greek version of the Old Testament.

In this way and by means of his generalizing remark in the closing verse (“he has done everything well; he even makes the deaf to hear and the mute to speak”), Mark signalled to his readers the early church's conviction that Jesus had inaugurated the end-time renewal of God's people foretold in Isaiah.

In healing the man, Jesus stuck his fingers into his ears, mimicking and thereby helping to open the ears to hear. The act of spitting, which symbolizes getting rid of something in the mouth that prevents speaking, helped to loosen the bound tongue. So did saliva from Jesus' healthy tongue.

The Aramaic word Jesus spoke (“Ephphata, be opened!”), his look heavenwards and groan, all communicate the difficulty of the healing and the supernatural power Jesus needed to bring the cure about. A similar mix of a touching gesture and words may be seen in the difficult miracle of restoring Jairus' daughter to life (cf. Mark 5.40-42).

This healing of a person struggling to hear and speak plainly is paralleled with the healing in stages of the blind man of Bethsaida (Mark 8.22-26). Not only do these two miracles testify to Jesus' compassion, they also suggest what Jesus wished to do so that the Twelve and each disciple might see, speak and hear spiritually (“Do you have eyes and fail to see? Do you have ears and fail to hear?” [Mark 8.18]).

Through the whole of Mark's story Jesus brought His followers to see, hear and speak about God's plan. He invited them to enter God's world-view by accepting the cross in their lives as He did. Possibly the reason for the secrecy about Jesus' wonder-working power (“he took him aside in private, away from the crowd.... Then Jesus ordered them to tell no one...”) is to forestall people proclaiming His Messiahship without telling about His suffering and death on the cross.

In every generation, as the psalmist says, “the Lord ... lifts up those who are bowed down”. This includes not only Isaiah's visionary proclamation of the new exodus and Jesus' healing ministry, but also James' defence of the poor against those who would be partial to the rich (“has not God chosen the poor in the world to be rich in faith and to be heirs of the kingdom that he has promised to those who love him?”). 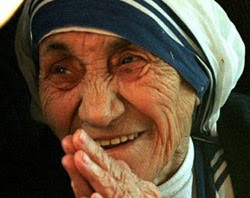 Fifteen years ago n this day, Mother Teresa died.  Today, in various locales where permission has been granted by the Holy See, local churches and congregations may celebrate the feast day of Mother Teresa, a universal symbol of God's merciful and preferential love for the poor and forgotten.

Mother Teresa was born Agnes Gonxha Bojaxhiu on August 26, 1910, in Skopje, Macedonia, the youngest of three children. She attended a youth group called Sodality, run by a Jesuit priest at her parish, and her involvement opened her to the call of service as a missionary nun.

She joined the Sisters of Loretto at age 17 and was sent to Calcutta where she taught at a high school. She contracted Tuberculosis and was sent to rest in Darjeeling. It was on the train to Darjeeling that she received her calling - what she called "an order" from God to leave the convent and work and live among the poor. At this point she did not know that she was to found an order of nuns, or even exactly where she was to serve. "I knew where I belonged, but I did not know how to get there," she said once, recalling the moment on the train.

Confirmation of the calling came when the Vatican granted her permission to leave the Sisters of Loretto and fulfill her calling under the Archbshop of Calcutta. She started working in the slums, teaching poor children, and treating the sick in their homes. She was joined a year later by some of her former students and together they took in men, women, and children who were dying in the gutters along the streets and cared for them.

In 1950 the Missionaries of Charity were born as a congregation of the Diocese of Calcutta and in 1952 the government granted them a house from which to continue their service among Calcutta's forgotten.

The congregation very quickly grew from a single house for the dying and unwanted to nearly 500 around the world. Mother Teresa set up homes for AIDS sufferers, for prostitutes, for battered women, and orphanages for poor children.

She often said that the poorest of the poor were those who had no one to care for them and no one who knew them. And she often remarked with sadness and desolation of milliions of souls in the developed world whose spiritual poverty and loneliness was such an immense cause of suffering.

She was a fierce defender of the unborn saying: "If you hear of some woman who does not want to keep her child and wants to have an abortion, try to persuade her to bring him to me. I will love that child, seeing in him the sign of God's love."

Mother Teresa once said, "A sacrifice to be real must cost, must hurt, must empty ourselves. The fruit of silence is prayer, the fruit of prayer is faith, the fruit of faith is love, the fruit of love is service, the fruit of service is peace." She also said, "give yourself fully to God. He will use you to accomplish great things on the condition that you believe much more in His love than in your own weakness."

O God, who called blessed Teresa, Virgin, to respond to the love of your Son thirsting on the cross with outstanding charity to the poorest of the poor, grant us, we beseech you, by her intercession, to minister to Christ in his suffering brothers. Through our Lord Jesus Christ your Son who lives and reigns with you and the Holy Spirit, one God, for ever and ever. Amen.
Posted by Archbishop Terry at 6:21 AM