Memorial of St. John Chrysostom, Bishop & Doctor of the Church - Sunday 24B: The Franciscan Cross 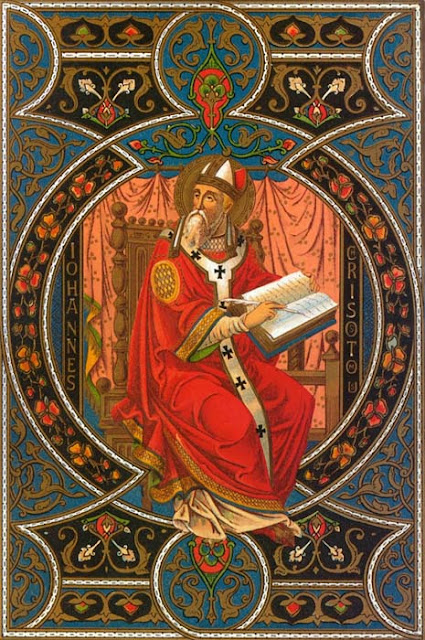 St. John Chrysostom, born in Antioch about 347 A.D., was a great genius. His powerful eloquence earned him the surname of Chrysostom, or golden mouthed.

With St. Athanasius, St. Gregory Nazianzen and St. Basil, he forms the group of the four great doctors of the Eastern Church. As Archbishop of Constantinople, his courageous stance against the vices of even the wealthy caused him to be exiled several times. As a result he died in 407, still in exile.

In 1204 his body was brought to St. Peter's in Rome but was returned to the Orthodox on November 27, 2004 by Pope John Paul II. His silver and jewel-encrusted skull is now kept in the Vatopedi Monastery on Mount Athos in northern Greece, and is credited by Christians with miraculous healings. His right hand is also preserved on Mount Athos, and numerous smaller relics are scattered throughout the world.

O God, strength of those who hope in you, who willed that the Bishop Saint John Chrysostom should be illustrious by his wonderful eloquence and his experience of suffering, grant us, we pray, that, instructed by his teachings, we may be strengthened through the example of his invincible patience. Through our Lord Jesus Christ, your Son, who lives and reigns with you in the unity of the Holy Spirit, one God, for ever and ever.
* * * * * *

A few days prior to the World Youth Day held in Rome in the Year 2000, the Halifax contingent had the joy of visiting the youth of a diocese south of Rome. Our encounter took place in the chapel of a Franciscan convent that dates back to the thirteenth century.

Tradition has it that Francis himself had lived in the area. He had dwelt there among thieves so as to share with them the joyful news of the reconciliation won for them by the death of Jesus.

At the close of our visit, there was an exchange of gifts. We offered our hosts copies of the archdiocesan jubilee CD. They presented us with the Franciscan tau-cross which many of the pilgrims wore from then on.

The tau is shaped like the capital "T" and—the Franciscans told us—was favoured by Francis because it was the last letter of the Hebrew alphabet and resembled the cross. In humility, Francis signed his letters with the tau as a sign of his love of the cross of Christ as well as his desire to be considered last of all and least of all.

We do not know whether Francis was aware of it, but tau is also the first letter of the Hebrew teshuvah. This word means “turning”, the root meaning of the biblical and rabbinical concepts of “conversion”.

Today's gospel reading constitutes the centre and heart of the Markan gospel. The confession at Caesarea Philippi occurs not only at the mid-point of the gospel; it is also the place where the central issues of the gospel message come together. Jesus' opening call to conversion (1.14-15) from now on takes the shape of a summons to each person who would be his follower to take up the cross and “follow me”.

From the earliest verses of the gospel, people had wondered about Jesus and his activity: “Who can forgive sins but God alone?” [2.7] ... “Who then is this, that even wind and sea obey him?” [4.41]). After much reflection, Peter—speaking on behalf of the Twelve—says to Jesus, “You are the Messiah”.

As Jesus had earlier asked that people not speak of his healing miracles, he now asked that the apostles not reveal this truth of his status as Messiah. For Jesus will carry out his messianic mission in a totally unexpected way—by being handed over to crucifixion, put to death and rising again “after three days”.

As soon as Jesus began to explain how God intended him to fulfil his mission, Peter (perhaps again reflecting the thinking of his fellow apostles) took Jesus aside “and began to rebuke him”. In response, Jesus, “turning and looking at his disciples”, rebuked Peter, indicating that Peter's way of looking at things had nothing to do with God's way of seeing things.

The Twelve (and all disciples who hear the teaching of Jesus) are asked to have a change of mind and heart in regard to their behaviour because they follow a Messiah who was not a military hero but someone who suffered the fate of a criminal exposed to death in the most brutal form of capital punishment known to the ancient world.

Knowing how well Francis of Assisi made his own the mind of his master, in our turn we are asked to take on the mind and heart of Christ.

Posted by Archbishop Terry at 6:32 AM