Together with his deacons Socius and Festus, and his lector Desiderius, Januarius, bishop of Beneventum, was subjected to most atrocious torturing during the Diocletian persecution (about 304).

Nevertheless, with God's aid they were preserved unmaimed. The wild animals let loose upon them would not attack. Beheaded at Puteoli, their bodies were reverently interred in the neighboring cities. Eventually the remains of St. Januarius became the prized possession of the city of Naples.

"Even to the present time the blood of the saint that is preserved in a glass vial will become fluid shortly after it is brought close to the head of the saint; then it bubbles up in a remarkable manner, as if it had just been shed" (Breviary).

Cardinal Schuster makes this statement in his Liber Sacramentorum (vol. 8, p. 233): "The author has seen the marvel of the blood liquefaction at closest range and can give witness to the fact. Taking into consideration all the scientific investigations that have been made, he would say that a natural explanation of the phenomena does not seem possible." O God, who grant us to venerate the memory of the Martyr Saint Januarius, give us, we pray, the joy of his company in blessed happiness for all eternity. Through our Lord Jesus Christ, your Son, who lives and reigns with you in the unity of the Holy Spirit, one God, for ever and ever. 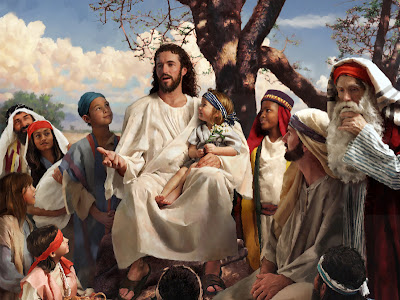 In the first half of Mark's gospel, a key question was “who is this” Jesus. For in his ministry Jesus taught “as one having authority, and not as the scribes” (Mark 1.22), exorcised and healed (1.34). “Even the wind and the sea obey him' (4.41). Finally, at the mid-point of the gospel, Simon Peter confessed that Jesus was “the Messiah” (8.29).

The second half of the gospel begins to address a second question, “what kind of messiah will Jesus be?” How would he live his messiahship? Three times Jesus predicted that he would fulfil his role as God's anointed by suffering, dying on the cross and, after three days, rising from the dead (8.31; 9.:30-32; 10.:32-34).

A casual reader might be tempted to write the disciples off as hopeless cases. But this is not the tactic of Jesus. Rather, Jesus instructed them, knowing that their salvation was a possibility, since “for God all things are possible” (10.27).

This teaching is meant to encourage disciples in every era, since they often share the same resistance towards the teaching of Jesus as the Twelve did in their day.

In the first half of the gospel Jesus drew the disciples to comprehend his identity, paralleling in their spiritual lives what he did in healing the deaf-mute and the blind man. Jesus was opening the disciples' ears and eyes to his unique role as God's anointed one.

In the second half, Jesus starts to draw his disciples into the paradoxical mystery of a suffering—sanctioned by God—that redeems. These are the first lessons in the drama of the Cross, the trial of an innocent individual anticipated in the testing of the righteous person in the Book of Wisdom (“if the righteous one is God's child, God will help him, and will deliver him from the hand of his adversaries”).

Whereas the first passion prediction (Mark 8.31) had been quite specific (“the Son of Man must undergo great suffering, and be rejected by the elders, the chief priests and the scribes, and be killed”), the second was very general (“the Son of Man is to be betrayed into human hands, and they will kill him”). Still the disciples “did not understand” and—what is more ominous—they were “afraid to ask him” about it (9.32).

Meantime, Jesus kept teaching the implications of following a Lord whose mission passes by way of the Cross. He had noticed that they were arguing “on the way” (a phrase that can simply mean “along the road” but that can also stand for the path leading to the cross and resurrection) and inquired about the topic in dispute.

The disciples were silent, knowing the topic was “who was the greatest” among them and keenly aware that an argument about status among themselves was inappropriate. In the second reading, James says that divisions come about from “cravings that are at war within you”. He observed that even murder can result from people not being satisfied but that, generally, coveting leads to “disputes and conflicts”.

Jesus taught an alternative way to greatness. It passed by way of lowliness and service. Its model was the child.

While our social conventions idealize the child, the child was a nonentity in the world of Jesus. The child should have been with the women and not with the Teacher and his students. To suggest that receiving a child should have meaning for the male disciples was inconceivable in the first century Mediterranean world. Yet, the child becomes a stand-in for Jesus—and for God who sent him!

Their contention about who would be first among them was to ask who would stand in the place of Jesus. Jesus' answer is that his representative (“whoever wants to be first”), must be willing to be like the child (“last of all and servant of all”). This saying hints at Jesus' self-offering out of love for all, even his argumentative and ambitious followers. For the way of the cross offers the model of servant leadership in the church.
Posted by Archbishop Terry at 6:29 AM