Yesterday as part of a visit to Jesuit confreres in Guelph, I was able to attend the following retrospective of a well-known Canadian and Catholic artist.  I had seen his work years ago in murals he painted at Corpus Christi Church, Toronto and St. Thomas More College, Saskatoon.  The exhibit for those in the GTA-Hamilton area closes on April 29; it has already been  mounted in Winnipeg and later this year will be in the museum in Victoria, BC.

WILLIAM KURELEK -- THE MESSENGER
The Art Gallery of Hamilton January 28 to April 29, 2012 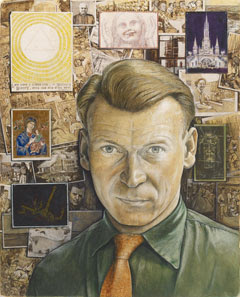 Throughout a career that spanned from mid-1950s until his death, William Kurelek (1927-1977) and his art have meant many different things to many people. The Alberta-born, Manitoba-raised artist was a painter of innocence and fun, his scenes reminiscences of a simpler and timeless past. He was also a chronicler of the experiences of various cultural groups in Canada, devoting entire series to Ukrainian, Jewish, Polish, Irish, French Canadian, and Inuit peoples. Then there is Kurelek the anguished prophet of a modern apocalypse, his art an indictment of the secular age and a testament to unwavering faith.

An important and unique aspect of this exhibition for Canadian audiences will be the inclusion of several works from Kurelek's highly formative period in England from 1952 to 1959. During this time the young artist underwent psychiatric treatment and converted to Roman Catholicism, which profoundly altered his subsequent approach to life and art making. It is in consideration of these early works that the exhibition reveals Kurelek's complex psyche and the central role it played in everything he produced. 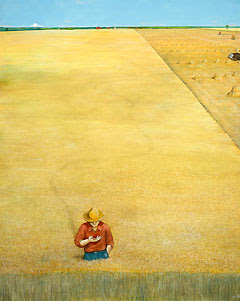 As the first large-scale survey of William Kurelek in thirty years, The Messenger seeks to bring together the most important and engaging works executed by the artist during his career. The exhibition opens at the Winnipeg Art Gallery in September 2011 and will travel to Hamilton early next year before its final showing in Victoria during the summer of 2012. This exhibition includes over 80 paintings that encompass the artist's entire practice. The works are drawn from major private, corporate, and public collections in Canada, the United States, and the United Kingdom. A major publication will be available in September 2011.

The exhibition, a partnership between the Art Gallery of Greater Victoria,
Art Gallery of Hamilton and the Winnipeg Art Gallery, is curated by
Mary Jo Hughes, Tobi Bruce, and Andrew Kear.
Posted by Archbishop Terry at 8:12 AM