Our Saint died 50 years ago today on April28, 1962; he life and that of other medical practicioners is a great encouragement to those gathered at the Canadian Catholic Physicians Conference in Vancouver.
Father John Horgan gave a wonderful overview of a large number of men and women in the healing professions who achieved holiness of life.
Here is a biography of our Saint of the Day (observed in Italy; other churches may observe the optional memorial of the martyr Saint Peter Chanel or the great articulator of Marian devotion, St. Louis Marie Grignion de Montfort):

Gianna Beretta was born in Magenta () October 4, 1922. Already as a youth she willingly accepted the gift of faith and the clearly Christian education that she received from her excellent parents. As a result, she experienced life as a marvellous gift from God, had a strong faith in and was convinced of the necessity and effectiveness of prayer.


She diligently dedicated herself to studies during the years of her secondary and university education, while, at the same time, applying her faith through generous apostolic service among the youth of Catholic Action and charitable work among the elderly and needy as a member of the St. Vincent de Paul Society. After earning degrees in Medicine and Surgery from the in 1949, she opened a medical clinic in Mesero (near Magenta) in 1950. She specialized in Pediatrics at the in 1952 and thereafter gave special attention to mothers, babies, the elderly and poor.


While working in the field of medicine-which she considered a “mission” and practiced as such-she increased her generous service to Catholic Action, especially among the “very young” and, at the same time, expressed her joie de vivre and love of creation through skiing and mountaineering. Through her prayers and those of others, she reflected upon her vocation, which she also considered a gift from God. Having chosen the vocation of marriage, she embraced it with complete enthusiasm and wholly dedicated herself “to forming a truly Christian family”.


She became engaged to Pietro Molla and was radiant with joy and happiness during the time of their engagement, for which she thanked and praised the Lord. They were married on September 24, 1955, in the Basilica of St. Martin in Magenta, and she became a happy wife. In November 1956, to her great joy, she became the mother of Pierluigi, in December 1957 of Mariolina; in July 1959 of Laura. With simplicity and equilibrium she harmonized the demands of mother, wife, doctor and her passion for life.


In September 1961 towards the end of the second month of pregnancy, she was touched by suffering and the mystery of pain; she had developed a fibroma in her uterus. Before the required surgical operation, and conscious of the risk that her continued pregnancy brought, she pleaded with the surgeon to save the life of the child she was carrying, and entrusted herself to prayer and . The life was saved, for which she thanked the Lord. She spent the seven months remaining until the birth of the child in incomparable strength of spirit and unrelenting dedication to her tasks as mother and doctor. She worried that the baby in her womb might be born in pain, and she asked God to prevent that. 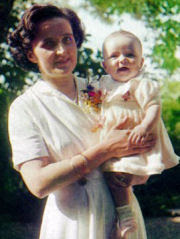 A few days before the child was due, although trusting as always in Providence, she was ready to give her life in order to save that of her child: “If you must decide between me and the child, do not hesitate: choose the child - I insist on it. Save him”. On the morning of April 21, 1962, Gianna Emanuela was born. Despite all efforts and treatments to save both of them, on the morning of April 28, amid unspeakable pain and after repeated exclamations of “Jesus, I love you. Jesus, I love you", the mother died. She was 39 years old. Her funeral was an occasion of profound grief, faith and prayer. The Servant of God lies in the (4 km from Magenta).


“Conscious immolation", was the phrase used by Pope Paul VI to define the act of Blessed Gianna, remembering her at the Sunday Angelus of September 23, 1973, as: “A young mother from the diocese of Milan, who, to give life to her daughter, sacrificed her own, with conscious immolation”. The Holy Father in these words clearly refers to Christ on and in the Eucharist.