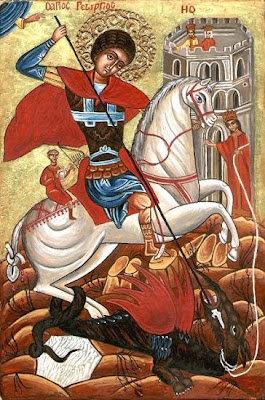 Veneration of St. George comes to us from the east, probably from Palestine where he was held in high honor as a martyr. Regarded as the patron of Christian armies he is venerated under this title by the Latins as well as by the Greeks.
St. George is venerated by the Eastern Church among her "great martyrs" and "standard-bearers." He belonged to the Roman army; he was arrested and, probably, beheaded under Diocletian, c. 304. He is the patron of England, since 800. St. George is one of the "Fourteen Holy Helpers."
Many legends are attached to Saint George. The most famous is the one in The Golden Legend. There was a dragon that lived in a lake near Silena, Libya. Not even armies could defeat this creature, and he terrorized flocks and the people. St. George was passing through and upon hearing about a princess was about to be eaten, he went to battle against the serpent, and killed it with one blow with his lance. Then with his great preaching, George converted the people. He distributed his reward to the poor, then left the area.
Extolling your might, O Lord, we humbly implore you, that, as Saint George imitated the Passion of the Lord, so he may lend us ready help in our weakness. Through our Lord Jesus Christ, your Son, who lives and reigns with you in the unity of the Holy Spirit, one God, for ever and ever.
* * * * * *
The past couple of weeks have been very busy and I have been unable to report with photos on several activities due to the misplacement of the cable for uploading from my camera.  The few photos available have come from others who have photographed ceremonies, events.
Tomorrow, I'll have a report with photos on the Wedding Anniverary Mass for the francophone parishes held yesterday at Notre Dame with close to 100 couples marking significant anniversaries (anywhere from 5-69 years!) with photos taken by Heri Riesbeck.
Looking forward to purchasing a new cable to link camera memory cards with my laptop, I hope to catch up on events in the Journey of a Bishop in the next couple of weeks.
Posted by Archbishop Terry at 10:03 AM